I have mentioned our quest for George’s pacies on many occasions.

We had this conversation a few days ago during one of George’s daily games of “Make Mom and Dad Chase the Pacy.”

The pacy had fallen out about a half a dozen times in a 5 minute span. And of course George starts pouting until we get the pacy that HE spit out on purpose.

Tom-I’m going to put a rubber band around your head so you can’t spit it out.

Me-We should get croakies for the pacy like they have for glasses.

Tom-What would we call it? We could call it a pokey.

Me-I don’t think that would be appropriate.

Tom-Yea I immediately realize how bad it is is to strap something called a pokey to a child’s face.

We received a pacy clip thing for Christmas so hopefully that will end the chase game that happens on the daily basis in our house. And maybe we won’t keep losing those things.

In recent weeks, there have been so many new parent conversations with Tom that have left me dying laughing or with my jaw on the floor. Unfortunately, I always think I am going to remember them to post, but then soon forget before I have time to write a post.

Just know, we are having lots of extra giggles due to our sleep deprivation and new parentdom.

This particular one happened late at night after George wet the bed.

I was changing the sheets, and Tom was holding a fussy George. (I mean who wouldn’t be fussy after wetting the bed?) 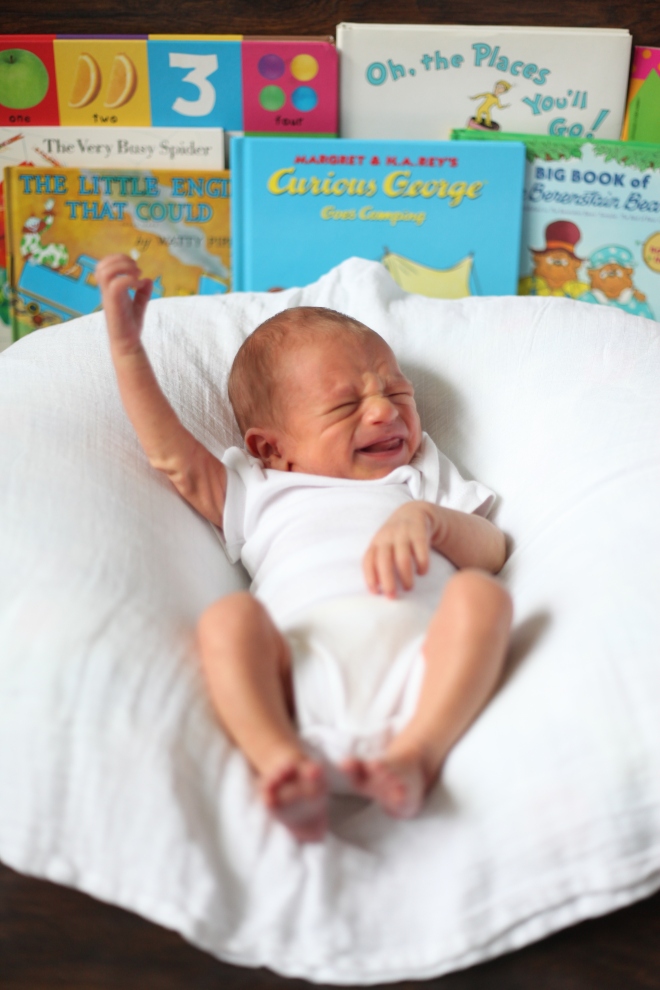 We had just fed him, but he wasn’t really settling down.

Me-Maybe he is still hungry.

Tom-Uh, yea I am going to guess he is still hungry since he just latched on to my nipple.

George will latch on to anything when he is hungry…collarbones, bibs, his own hand, my hair, the inside of my elbow…

Tom has resorted to letting this happen fairly often now to keep the fussiness at bay while we are trying to get bottles and milk ready for him.

The things we do as parents.

But seriously, I would do anything for this face. 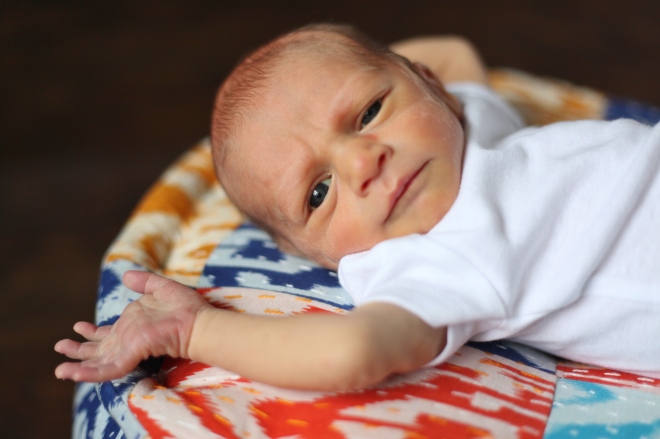 On a related note, George’s due date was today. Crazy to think we were supposed to be just meeting him now, but he has been on the outside now for 3 weeks.

He also got to meet one of his cousins this week.

They were seriously adorable together. Ava was so sweet with him. She has volunteered to be his babysitter and teach him all the words. George of course was perfectly content being dotted on all weekend.

I can’t wait to watch them grow up together!

We had a great weekend at home after weeks of traveling.

We cleaned. (We can actually see the floor of the second bedroom/George’s nursery now.)

We enjoyed a few movies and TV shows.

We cooked instead of going out.

And I listened to Tom make up songs.

We had a real grown up meal last night to which I dedicate this post.

I might cover it in honey that was made by some bees.

It was hysterical when he sang it, which unfortunately does not translate as well in written form. One of these days, I may be able to record it. Most of the time these songs come out of nowhere though. And I am usually distracted by laughing too much to think about grabbing my phone to catch it.

I hope you all had a great weekend because we sure did! Although the dogs aren’t really showing it…

Grace was so stressed the whole day we were cleaning. She thought Tom was leaving again and refused to get off his gear as we organized it.

Crosby follows me around everywhere as my protector. He wouldn’t even budge from his post as I was trying to make our bed.

This conversation occurred when we were at the mall this weekend. Tom wanted a snack, so we stopped at a cookie kiosk to fill his munchie craving.

I suggested getting a 5 pack because he couldn’t seem to comprehend only eating two cookies (which is their normal combo). Then I could get two, and he could have three.

Thanks for thinking of me babe.

Tom:  I don’t think it’s unreasonable for me to sit here and eat three cookies. I ate a skittle off the ground earlier.

(He weirded out a woman in Target maybe 30 minutes prior to our cookie excursion by eating a skittle she had dropped on the ground.)

Tom:  I’ll leave no fallen watermelon skittle behind. If it would have been an orange skittle, that thing would have died right there.

Just so you know, this is a plastic display at the zoo…that Tom is licking.

There are a lot of food fads out there, one being the new craze of Paleo.

If you do this, good for you. If it is helping you make better choices and be healthier, I am all for that.

But I will admit, I don’t get the actual practice of it.

And neither does my husband.

Here is his take on it:

As I understand paleo, it is eating food as it would be eaten in the Paleolithic era. That is berries from the ground and raw meat. Foraged food. You can’t make paleo brownies. Paleo people didn’t eat brownies. If the idea is that as long as it is made out of natural or raw ingredients, wouldn’t that mean that anything is paleo? Corn is from the ground. Corn makes high fructose corn syrup. High fructose corn syrup makes candy. Thereby jolly ranchers=paleo. Ok so I love the Paleo diet.

Since this first conversation, at almost every meal/snack, Tom denotes how what he is eating is actually ok according to the paleo theory. From chipotle, Now and Laters, to grilled cheese…it’s all paleo to him.