I am late to the ballgame, but I just started playing Candy Crush this month.

WHY is this so addicting?

I got stuck on a level last night, and I voiced my frustration to my husband who has been playing Candy Crush for a long time.

He kept trying to see the level to give me pointers, and I insisted on figuring it out on my own. We also probably looked ridiculous with me trying to hide my screen while he was trying to climb on the armrest to get a peak at the level.

Because you know that this game defines how successful I am as a human being.

And this was Tom’s response:

“You are basically in high school, and I have a PhD in this game. Let me help you.”

Back off I don’t need your help.

Seriously, first world problem is when you are playing this game on your lunch break and you get a 2 hour unlimited life reward right when you should be going back to work. 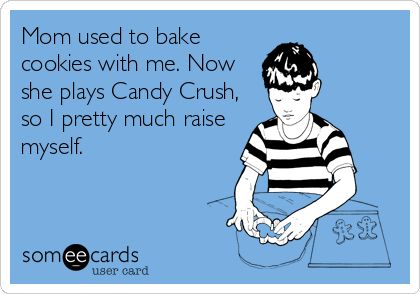 Sorry George, now you have two parents who are addicted.

Have you played this game? Do you ask for help? Do you find yourself losing time switching candies around?

One of the struggles of being a police officer is the ever changing shifts. One day he is off and trying to be an active member of our family during the day, and the next he has to be a night owl going to work at 8pm.

This was a conversation about Tom trying to retrain his body to be awake at night.

Me: I started laughing once he said 1-3, because he had originally wanted to take a couple hour nap at 7pm so he could stay awake over night and then sleep the next day.

Tom: I won’t get into it but I got into my bivy sack and slept on a boot at 1am.

Tom: In the storage room.

Me:  So you got out of our comfortable bed at midnight, to go to sleep downstairs in the storage room on a boot?

Tom:  I wondered if it was still as comfortable as it was in Afghanistan or if just anything was comfortable over there. And it turns out if you were infantry, it is always comfortable.

Don’t mind me enjoying the big bed all to myself.

It’s been awhile since I have shared snippets of our conversations. Here are a couple snippets of talks we have had lately.

Tom tries to come get me from work every other week for a lunch date since our schedules are so wonky. We were discussing which restaurant to go to this week.

Tom: How about we go to that Greek place?

Me: I can’t. I just went there today.

Tom:  It’s a restaurant not a tampon. You can go there again.

And just in time for America this week: this conversation happened over a meal recently.

Tom:  I inhaled a little bit of bacon. Very American.

What funny conversations have you had recently with friends or significant others?

This conversation occurred when we were at the mall this weekend. Tom wanted a snack, so we stopped at a cookie kiosk to fill his munchie craving.

I suggested getting a 5 pack because he couldn’t seem to comprehend only eating two cookies (which is their normal combo). Then I could get two, and he could have three.

Thanks for thinking of me babe.

Tom:  I don’t think it’s unreasonable for me to sit here and eat three cookies. I ate a skittle off the ground earlier.

(He weirded out a woman in Target maybe 30 minutes prior to our cookie excursion by eating a skittle she had dropped on the ground.)

Tom:  I’ll leave no fallen watermelon skittle behind. If it would have been an orange skittle, that thing would have died right there. 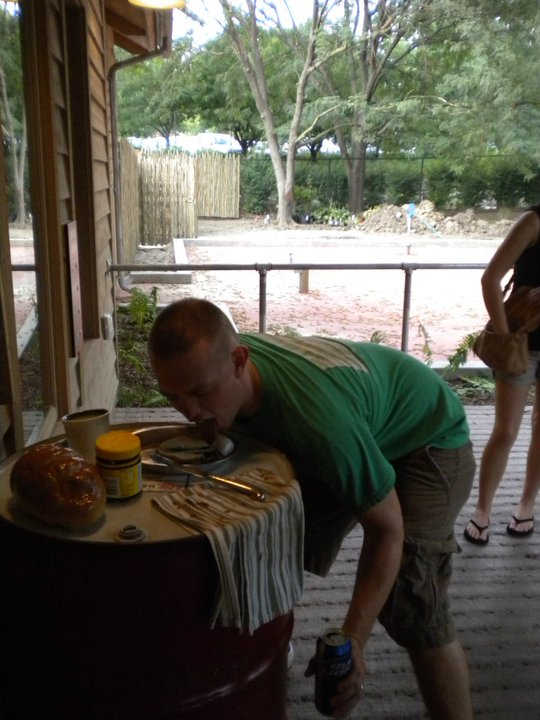 Just so you know, this is a plastic display at the zoo…that Tom is licking.

I have held out watching this show for a long time. Mostly because I get startled easily, and I am like a child and have nightmares really easily. I couldn’t sleep for a week after watching The Black Swan-seriously in tears every night.

Tom however was really good at convincing me to catch up before the new season begins. So for the past couple weeks we have been watching the first three seasons to catch up.

It has been followed by a lot of end of the world prep conversations and analyzing the stupidity of some of these people. It takes us double the time to watch one episode because of all the pausing Tom does so we can talk “zombie shop.”

It is ridiculous some of the conversations we have had. It has even gone as far as Tom giving me a lecture in the middle of the Commissary as to what I need to worry about grabbing.

The preparing conversations are not quite as good as this little number.

Tom-“If I were a zombie, I would be a smart zombie. I would carry around an umbrella and ride on a bike. The umbrella is for decoration.”

Me-“So you would lure them in with the bike?”

Tom-“No, I would do it for the shock factor. I would pop wheelies. No training wheels.”

I love my husband. He says super romantic things like he would stay and get eaten by Zombies if he wasn’t sure that I was dead.