Well really we never said I do. We high-fived it.

Year four was a rough one for us, not going to lie.

We experienced the highest of highs (George), and the lowest of lows (just stuff).

I was job searching, and continued to receive some devastating no’s during the end of my pregnancy. Honestly, there is one no that I still have issues with and to this day still haven’t completely processed. It was soul crushing to say the least, never mind the fact that I was also an 8-month pregnant woman-holy hormones.

It was no wonder my blood pressure was out of control and my doctor ended up putting me on bed-rest, meaning that I had to quit my part-time job a few weeks before I had planned.

Then George decided to make his appearance early. This is a day that was scary and wonderful all at the same time. The days that followed were terrifying as we watched him hooked up to monitors in the NICU, and also Tom and I were coming to terms with that we were actually parents.

But seeing this beautiful face, makes every low point of this year seem like it was nothing. We love him so much.

He is the reason for everything now. You can’t understand what your heart is capable of and how much it can grow until you have a child. It is amazing. I feel honored that God has chosen us to be the guiding lights for this little man. 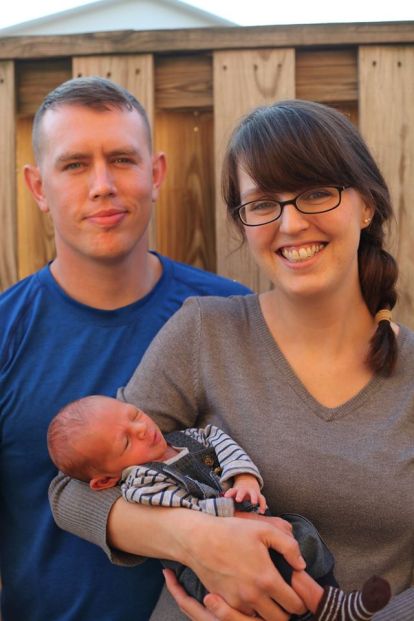 A couple weeks after George was born, a friend of mine let me know that a job was available that sounded perfect for me. I had put the job hunt on hiatus since that paralyzing no so I could focus on little man and to get my head right. However this job was just too perfect not to apply for. So it pushed me back full swing into the job search. I interviewed for several jobs through Skype and phone during September and October.

And low and behold, I finally got a yes (to that initial job my friend suggested). Everything had timed out perfectly. (You are good God. Why I doubted your plan, when you have it so perfectly made for me.)

September and October was also a very exciting time since our beloved Royals were making their way into the World Series, which was the first time since the year Tom and I were born in 1985. You can just search my blog for Royals baseball, and you can read for days about my infatuation for this team. We stayed up many nights to watch all the extra innings during Blue October!

In the beginning of November, George and I moved to Missouri, permanently. Tom stayed behind hoping he would be approved for an early out, otherwise he would still be in KY until June due to his military orders.

I started my dream job and juggled the demands of being a working mom.

Tom accepted a police officer job after about 6 months of interviewing with this one department. This also helped seal the deal on the Army letting him out early.

Before Christmas, Tom and the dogs finally joined us in Missouri. The place we have always wanted to be.

The place we were going to make roots and raise our children.

The place we were going to make the life we had always dreamed of.

But the sunshine and roses didn’t last very long.

December through March were some pretty dark days for us. Some of the darkest of our entire 8 year relationship.

Tom had started the police academy, which meant a lot of time away from the family. His focus was very much on succeeding there as it should be. But it meant George and I were alone a lot more than I imagined.

I was feeling a lot of anxiety and guilt from our breastfeeding experience and was also becoming resentful for Tom’s time away. Thinking back, I think I may have had some post-partum depression but wasn’t really willing to admit it, so of course I took it out on Tom. I am not proud of that, but it happened.

We had some other life things happen that definitely impacted our emotions. One of those being my grandma’s passing.

We were having a really hard time figuring out this newness of our relationship with both of us having new jobs and balancing being new parents. These new demands and expectations put us on the struggle bus to say the least. I have heard a lot of new parents say the baby’s first year is the hardest on a marriage, and boy was that true for us. 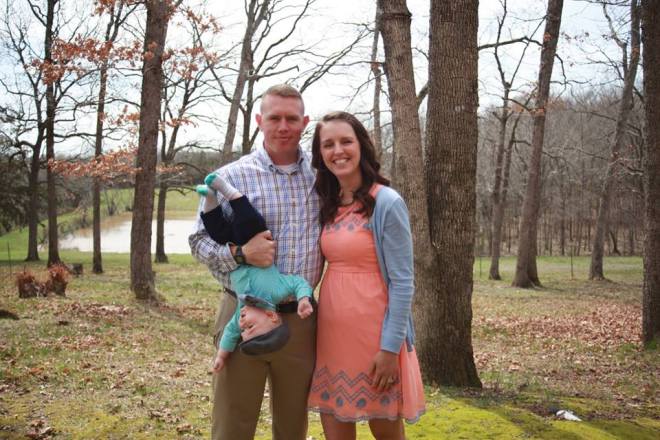 But then around May things started to turn around.

Tom was finally on the road as a commissioned police officer. I am finally finding a groove with my job, and I feel valued and appreciated as a professional.

And George started sleeping through the night. (This makes a world of difference friends.)

We were finally communicating better with our needs and recognizing where each other needed more support as parents and spouses. We were clicking again. It didn’t hurt that we also took a night away and stayed in a B & B. This time we had to focus on each other was something we really needed. It was also the first night that both of us were away from George. 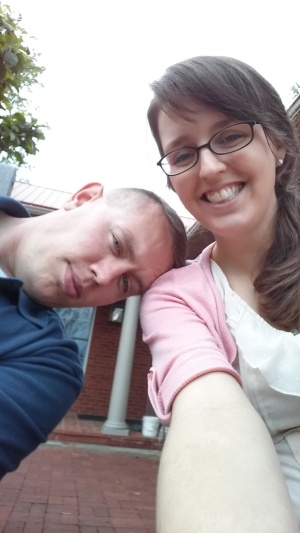 May was also when we got really serious about finding a permanent house to pay a mortgage on. We were done with rental property, and we were committed to entering the next phase of becoming home owners.

All of that leads us to where we are now.

Celebrating 4 years of hard work and dedication to each other.

Celebrating the love between two people. 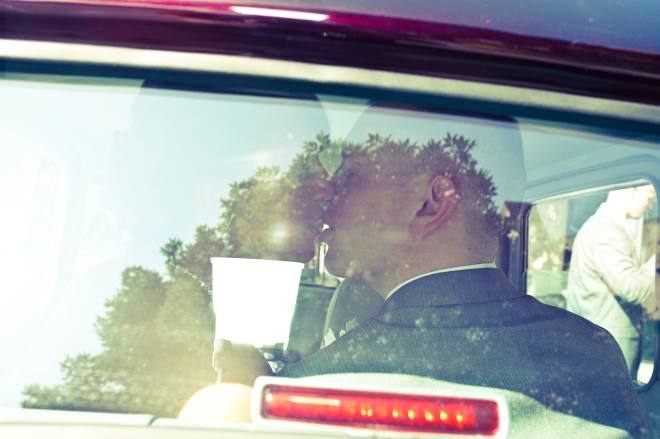 What this year has taught me is that everything in life will not be perfect, and that is ok. There are going to be some hard times; some times that you think you want to just throw in the towel because that seems easier. It was a year we definitely had to live up to our vows. But with some perseverance and a lot of prayers, God will show you the way. Life is never going to look the way you had imagined-and that is some good and bad. You need to take one step at a time and own up to your insecurities and flaws, especially with your spouse. We had our fair share of fights, and we both had to learn when to give in. This can be a hard lesson. (One that I have to relearn quite often) You often hear that marriage is about team work and compromise, but sometimes there is the reality that one has to give more than the other. As very independently stubborn adults, you can imagine this can sometimes cause some friction of the heart. We need to not let our pride get in the way of our marriage. Even after 8 years, it can still be hard to be vulnerable and bare with another person. There were also moments of great strength shown throughout this year. I would not have been able to pick myself up after being uttlerly crushed during that job search and keep on going if Tom had not been cheering me on or lifting me back up. We will always need each other. Even in the darkest moments, I knew that this season would pass eventually because that is the way of things. It was just something we had to get through to get to better moments.

This sounds like a very downer post about our marriage, but I think it is important for people to know that a marriage can struggle. People can struggle. That doesn’t mean that it is the end, and you CAN get past it. I think we often put this facade out there that everything has to be perfect, and honestly that was part of our issue this year (ok maybe my issue). We had to accept some of our realities and just muddle through it. We made some mistakes, but we always came back to we loved each other and that this marriage was important for us. I wish more people would be honest when they are struggling because it can be very lonely to feel that no one may understand. Things aren’t always perfect, but that doesn’t mean that there still isn’t beauty there to find. There were times that I didn’t want to admit what was happening because I was embarrassed and felt like I failed as a wife or I didn’t know if people would understand, but I also didn’t want sympathy or those looks (that I would assume are judgement on my “said” failure). Because this imperfection is something I really struggle with, I am working on being more open about these moments where my life doesn’t look like a fairy tale.

This is now part of us, and I believe that it has made us stronger in the end.

I want to document that this year was hard, uncomfortable, and difficult for us, so we can look back and be proud of what we came out of. And it is a little cathartic to admit that we had a rough patch and gives you a reason to just let it go instead of trying to hold on to it like a secret.

Tom and I have been together for 8 years, and there is still stuff that we are learning about each other. And nothing is bigger than learning how to be parents together.

In the end, there is the love that I have always had for Tom. (and lots of sideways glances)

This year both of us turned 30. We have the jobs that we have always dreamed of finally. We have the baby we never imagined we could have. Things haven’t always been perfect, but I couldn’t imagine doing life with anyone else. 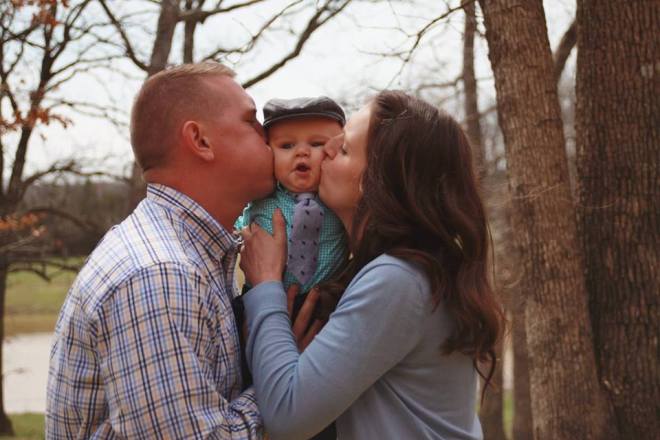 High five to us for making it through year four and bring it year five!

If you want to read more about our love story, there are links documenting each step here.

Tis the season to be freezing.
I don't know if it makes a difference but this is our spiel every morning before we get out of the car for school drop off. Honestly, it's just as much for me as it is for them. We can control our attitudes, and sometime we just need to speak it to life.