Health: She has been super fussy this month. She has a total of 8 teeth, and she is working on 4 molars. She gets diaper rashes really bad, and there really isn’t a remedy that we have tried that works (and we have tried a lot). She also got her first real injury. She fell in the bathroom on the trashcan rim. She had a giant bruise on her face. It’s been there a couple weeks now. 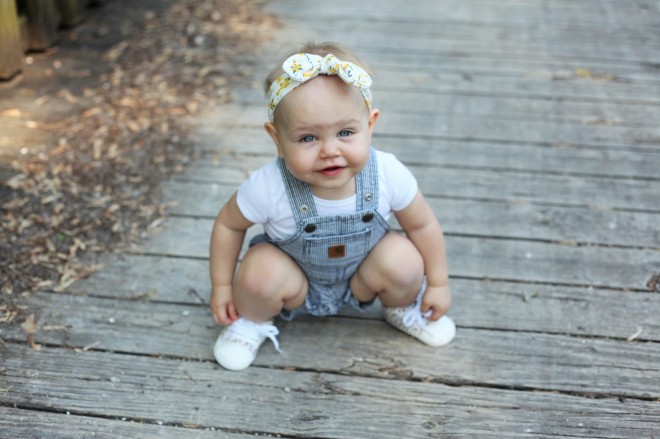 Diet: Daph has been a great eater. This week she has been a bit picky, but I think it may be the teeth. She has started the toddler thing that every night is something different and it is not a guarantee that she will love something day to day. She loves sweet potatoes and raspberries. I stopped nursing her right before she was 13 months. She went on a milk strike right after that, and she is just now drinking milk regularly. She loves to drink water though.

Sleeping:  We have been putting her to bed around 7:30/8. She generally stays asleep most of the night. She hardly sleeps past 7am. She still has two naps a day, and she is really sticking to two hour naps.

Likes:  She LOVES to wear her robe, which is a 3T size. She is obsessed with her elephant backpack. She believe it is her duty to close every door in the house. She adores George!

Dislikes:  Diaper Changes. She does not like being left out. She wants to be all up in George’s business which is hard for her when he doesn’t want her around.

Milestones: She can climb up and down stairs. Girl is practically running now. She gives open mouth kisses and will give you hugs when you ask. She says ni-ni (night, night). She can climb, which is terrifying because she isn’t super safe about the getting down part. 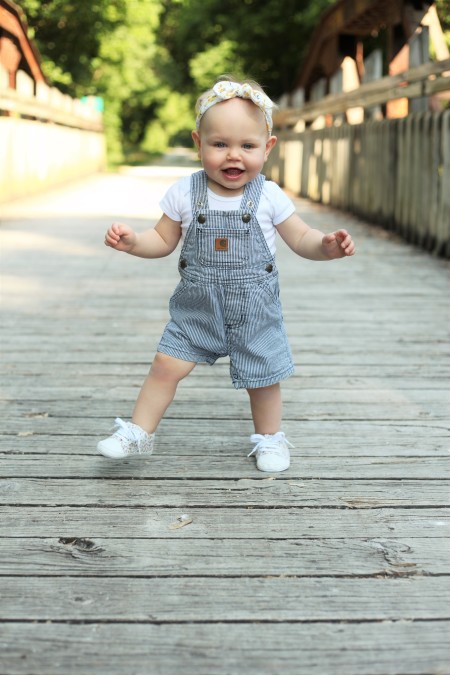 Nicknames:  Daphie, Sisterbear, Sis, and Daphie Girl. The two most common are still Daph and Sister.

Quirks:  She will sing along with you when you sing her lullabies. She will mimic your laugh. When she is drinking, it’s like she stops breathing she is taking such big gulps. She tries to put on her clothes and shoes. She come pretty close to it too. She is also so smart. She follows directions really well. She puts things away where they are supposed to be, and even knows the difference between her toys and the dogs toys.

We parents are: not too bad! Tom just switched departments, and he is now on a permanent day shift. It has only been a week, but I can already tell a difference in his demeanor and how George reacts to his time home. It is a much better department too, and offers more support to him as an officer. I am appalled at how he was treated over this last year, so I was glad he was able to move to a better place and have better hours for our family. We are gearing up for one of the busiest times for higher ed, but it is also my favorite time of year with my job. I just love all the new possibilities and seeing all these dreams begin with our students. And I am starting to finally feel settled into the director role, so I am really excited to see what my department does this year. Things are good!

George is: amazing me every day. His vocabulary is crazy good. I just think how we thought he was delayed two years ago. He has recently started making up his own songs. I am constantly cracking up at this boy. He isn’t super fond of Daphne right now. He gets into his stuff too much and messes up whatever he is playing with, so he gets really frustrated with her. Then he’ll have moments where he is super sweet to her.

The dogs are: living their best life. With the kids home all day, they spend as much time as they want outside and rarely are alone. They adore Daph at meal time, and she even tries to share and feed them. Crosby is not appreciative of our new chicken friends. Grace is still the diva she always is.

I love watching this girl come into her own. She is going to move mountains.

Here is George at 14 months.