Everyone wants to know how Crosby and Grace are reacting to Little G.

Our first response is great and better than expected.

When we left the hospital before George, we brought home his little nursery hat so the dogs could get a whiff of him before we brought him home.

Crosby thought it was a toy and snatched it out of my hands.

That’s enough to make you nervous.

When we brought him home, they tried smothering him with kisses. Then they didn’t really know what to think.

Who is this new puppy we brought home? And why does he get held all the time?

(I apologize in advance for the poor picture quality. Dogs don’t know how to stay still for a camera.) 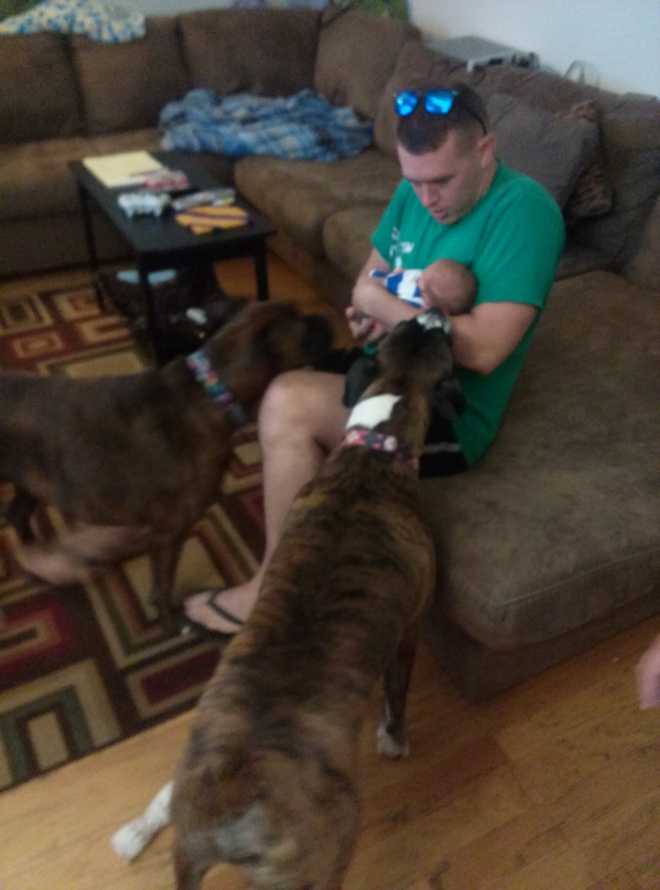 Now they have gotten used to each other for the most part.

George doesn’t react when the dogs bark, even right near his head. 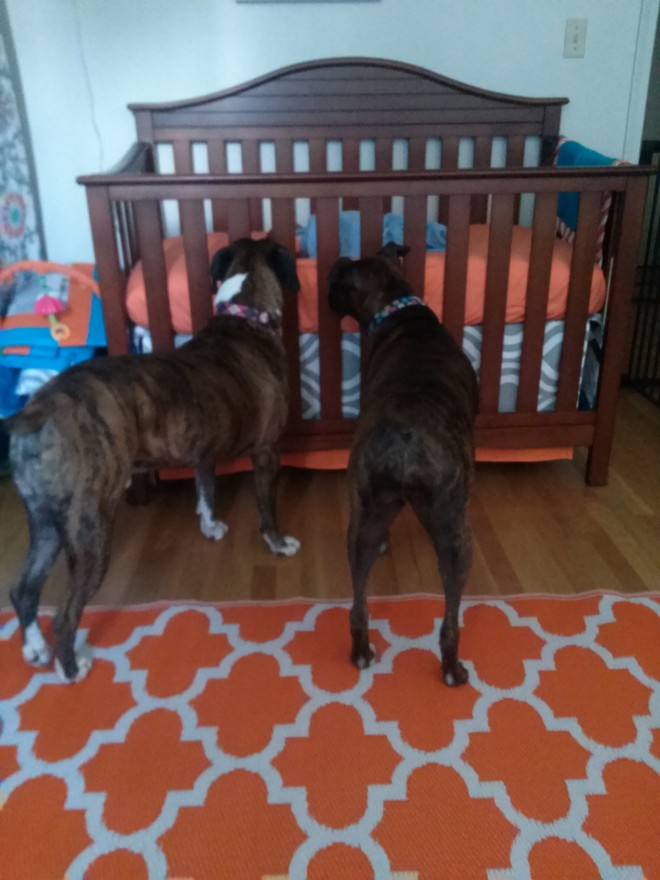 Crosby does not seem interested in George most of the time. He kind of keeps his distance, unless he is trying to sneak in a full head lick. We try to discourage his licking because he is a little rough when he licks us. When he licks George it’s like he is trying to make him a bobble head.

Grace, however, wants to be near George All. The. Time. She loves to dote on him. She never is very far from him and is so sweet with her kisses. 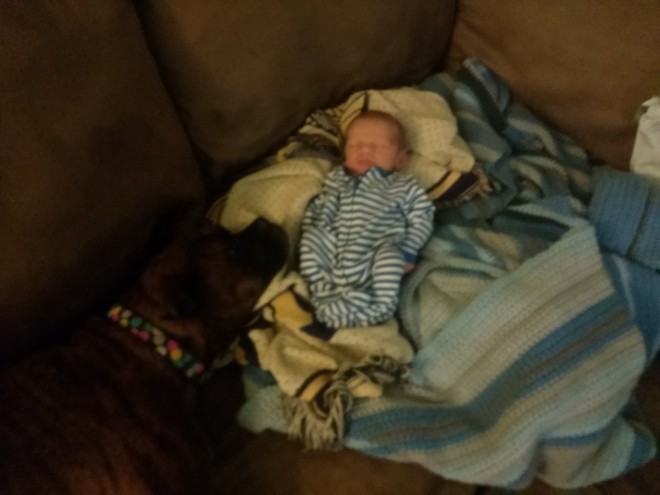 The other night Tom and I were laying in bed doing our nightly routine of watching the baby monitor for a few (more like 10) minutes to make sure that G is doing ok in his crib before we fall asleep ourselves. We hear this weird noise on the monitor like a scratch, but George wasn’t moving. We scrolled the monitor out a little to see a paw reaching in between the crib bars. We pull it out even more to then see Grace try to GET IN the crib. She had put her paws over the top of the crib like she was going to jump in to cuddle with G. I laughed so hard I could barely breath. 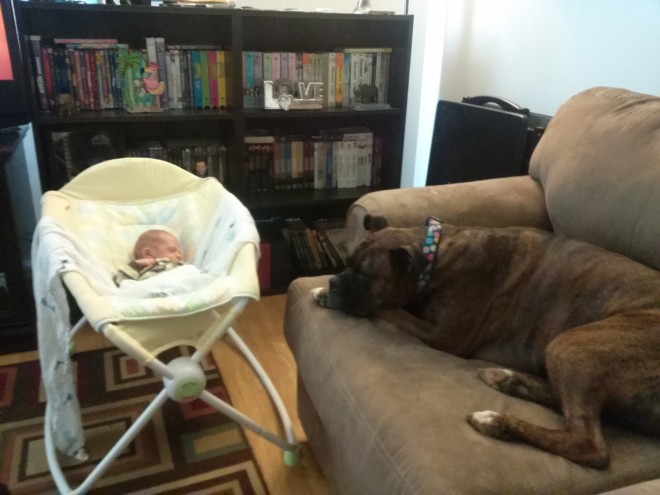 It is probably my favorite moment since bringing George home.

Once he is in a big boy bed, we are sure Grace will be cuddling with George more than us. (That’s fine with me because that means more space in our bed!) 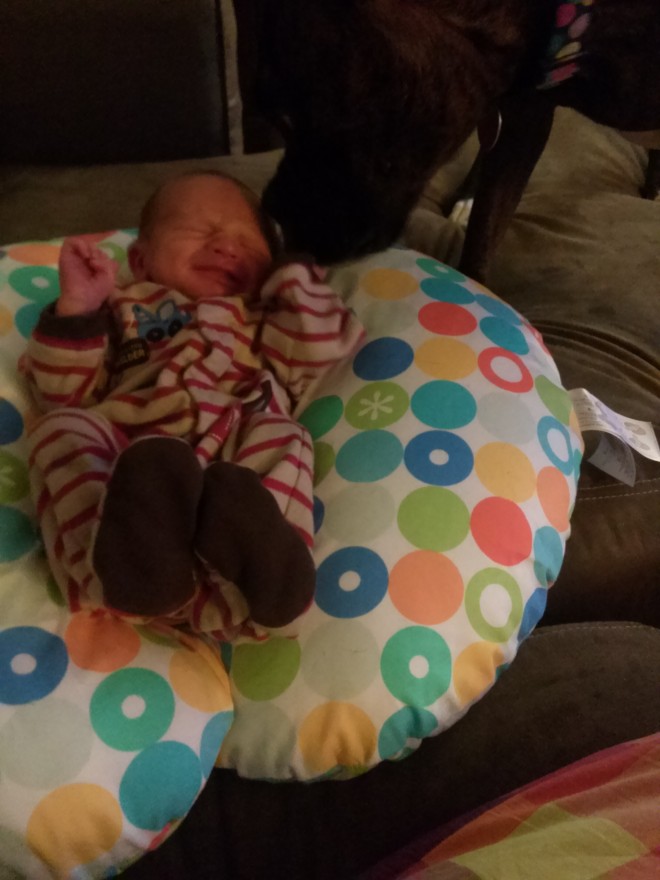 Until this last weekend, we didn’t have any issues with the dogs grabbing dirty diapers or George’s toys as their own. Our family was here this weekend, so I think they just got over-excited with all the people and couldn’t control themselves. That is the only time a diaper or toy has been grabbed. In Crosby’s defense, the toy did look like it could pass for a dog toy. George got his first stuffed animal this weekend, and I would be lying if I said that I wasn’t nervous that it may become a chew toy in the future. So hopefully they stay away from it!

Grace does try to lick all the spilled milk off the burp clothes and bibs. I will pull one up and find it so wet from her trying to get all the taste off it.

We try to give the dogs intentional attention so they don’t get jealous. And as soon as I am released from the doctor to get back to exercising full force, they will get their daily walks again. I think it does help that I am home all day with them so they do get attention that they weren’t getting before anyway.

George is now three weeks old, and so far they have done really well together. I can’t wait to watch their relationship blossom even more as G gets older.

I just know they are going to be best friends.

Were you best friends with your pets growing up?