Health:  This kid and teething. Seriously, they are just barreling in. He has 12 so far, 6 on top and another 6 on the bottom. He also has four cutting right now. FOUR. The last couple weeks he has been alright mood wise, but his nose is basically a leaky faucet. He has also had a really bad cough the last week working through this round of teeth.

Diet: Not much has changed the last two months. He eats what we eat for the most part. There aren’t many vegetables that he will eat, so he gets at least one squeeze pouch a day as a snack to make sure he is at least getting some veggies each day. He has started eating meat more regularly which is good. Carbs are still his favorite. He still will change his mind on how and what he will eat at any given moment. He will always eat oatmeal, rolls, and bananas. He actually will eat a banana like an adult by holding the peel now!

Clothes:  This little dude grew this last month! He is basically in 18 month clothes. They are a little baggy, but he is way too big for 12 months, and there aren’t a lot of 12-18 months clothes out there. He also sized up in diapers and shoes, both size 5.

Sleeping:  Things have been so different this last month! He is sleeping through the night again-Thank the Lord! And when he does wake up, he usually can talk himself back to sleep. Yes talk himself back-we may have a sleep talker. Last month, I thought he was having night terrors because he would wake up with a bloodcurdling scream and couldn’t go back to sleep. I felt like we were back in the newborn stage. Thankfully that only lasted a couple weeks. We have been phasing out the second nap. It has been an adjustment though because he wants to now take a 2-3 hour nap right over lunch time. We’ll work it out, but I have noticed such a huge difference in his bedtime sleeping. He now sleeps from 8pm-7am. On the weekends he has even slept until 8 (one time 9am)! Sleeping in has never been sweeter.

Likes: He loves the Tupperware cabinet and taking all of the Tupperware out. He is really into putting lids on things now, so the Tupperware has been fun for him. He loves heights and climbing. Now that he has figured it out, he wants to climb everything. This stage is absolutely terrifying because he is not afraid of anything. I am just waiting for the day where he can climb out of his crib. I am having a panic attack thinking about that. He loves to read, play with legos, dog toys, getting into boxes/baskets, and throwing things. He is also really into pointing to things. He loves to make anything a scarf, but particularly loves putting our belts around his neck like a necklace. He still really loves brooms or anything in stick fashion. He got a little swifter for Christmas, and I am fairly positive he would sleep with it if we let him. He loves Christmas lights and trying to plug them in on his own. He also loves putting things in the fireplace. the other day I found it stuffed with Tupperware.

Dislikes: He does not like to be told no. He doesn’t want to take pictures at all. He doesn’t like when I take him off the couch where he has so proudly climbed and now wants to face dive off of. He hates PDA, so we don’t get kisses or holding hands at all. Hugs are very few as well unless he is super tired.

Milestones: He is “talking” a lot, but not many new real words. He did add night night and uh oh to his repertoire. Mostly, he just repeats the main syllable, like right now he is really into Bs. George now will go brush his teeth when I ask. I don’t know how this happened because a few weeks ago he acted like it was torture. He did have his first dentist appointment. He enjoyed his first Christmas tree. We are working on using silverware. Some days it goes well, and others it is a hot mess. He claps and waves bye bye more regularly now with the right timing too. He gets the concept of drawing and holding a pencil. We got some chunky crayons for Christmas so we are going to do a lot more with this development now.

Quirks: He has this evil chuckle when you tell him no, which basically means he is going to do it anyway. He sits in the middle of the kitchen when I get his bottle ready or get a squeeze pouch out. He will even sit when I tell him too, like he is a dog. He crawls into our laps and actually will sit really nicely. This is really the only cuddling he will do.  When I sing him to sleep he grabs my neck and presses his forehead against my chin and giggles while I attempt to sing like that.

We parents are:  We have really enjoyed the last two months with day and midnight shifts for Tom. It has been busy with the holidays, but we have gotten a little more family time. Tom has also been working like crazy to fix up the living space in our basement.

The dogs are: now 5! George and the dogs get along so well. George is now petting them a lot more gently, which is a huge step up from the smacking and intense grabbing that was happening. The dogs enjoy that he is an endless supply of goodies between the spilled milk and food thrown everywhere. 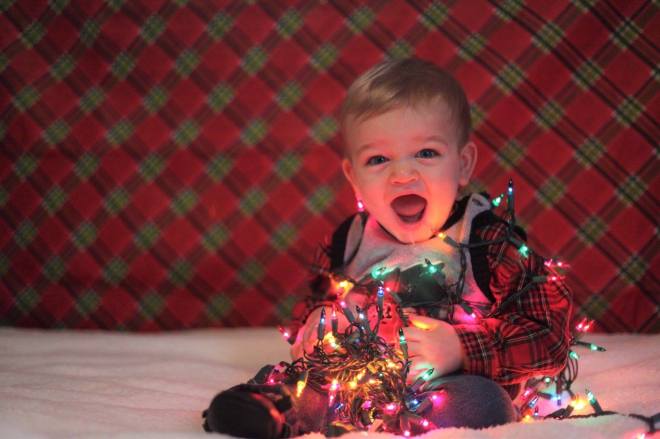 This little man just warms my heart. He is growing so much and so fast!