There is also a give away with this review people! Who doesn’t love to win something?

I did receive this book complimentary from Litfuse Publicity Group for my review. These thoughts are my own. 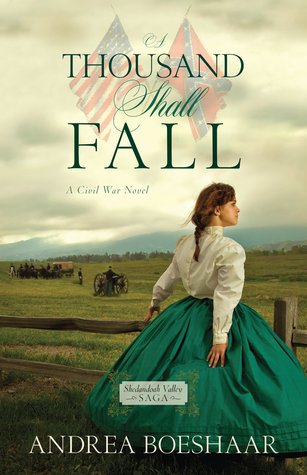 As you know, I love historical fiction. And my favorite time period is the Civil War. So naturally when this review presented itself, I hopped on that band wagon right away!

About 9 chapters in though I was hooked. I read from there to the end in 3 days. People when you have a toddler, reading an entire book in a week is a really big deal!

The book follows a spirited young woman, Carrie Ann, on her quest to find her sister who had run away. In order to do so Carrie Ann left her southern home to infiltrate Northern territory (and troops) during the Civil War. After being captured, she befriends her captor, who is a Yankee Colonel.

I don’t want to give to much more away because beyond that information is where I got hooked.

There were definitely parts that I thought were predictable, but Andrea put in twists that had me guessing. Is Carrie Ann going to help her childhood friend who is a Rebel fighter, or her new confidant in the Yankee Colonel? This is the underlying struggle during the whole book. You also get to see how each character has evolved from the war and how they have to develop new relationships with old acquaintances because so much has changed from the war.

What I enjoyed most about this book was that it was funny. I don’t know how many times I caught myself laughing out loud with the reaction of the characters. The humor was refreshing for this period piece. A lot of historical fiction has that old time romantic “Gone With the Wind” feel to it. While it had the romantic element, it was a little more down to earth so that was nice.

So why not a 5 rating? That slow start really got me good, so it may be a five if I hadn’t just read another Civil War historical fiction.

There are plans for this to be a series, but I am bummed that the next book doesn’t come out until next fall. Way to tease!

This is definitely a good read my friends.

Andrea is celebrating the release of A Thousand Shall Fall with a Kindle Fire giveaway!

One grand prize winner will receive:

Enter today by clicking the icon below. But hurry, the giveaway ends on December 10th. The winner will be announced December 11th on Andrea’s blog.

Have a good weekend! On to the next book!

2 thoughts on “Book Review: A Thousand Shall Fall”

This dude is 10 months old today. I blink and the month is just gone.
Daphne had a great first day of school! For the girl who I have to stand with at soccer because she is so shy, she walked right into class and was talking Mrs. Dunn's ear off about her butterfly backpack.