9 months of this guy. How is this possible?

Weight: 18 lbs and 3 oz. Not sure of his height or head measurement. I feel like he really grew a lot this past month. I can definitely feel it when I pick him up. (all those carbs…)

Health:  Earlier this month, he had a really bad cough. He sounded like a rattle can when he was breathing. I took him to the doctor because I was afraid of stuff settling in his lungs. She said it was a good thing that we did because he had a really bad ear infection. George however was not showing any of the typical signs of being bothered by an ear infection. On the plus side there was no mucus in his lungs. He actually liked the antibiotics this time around. 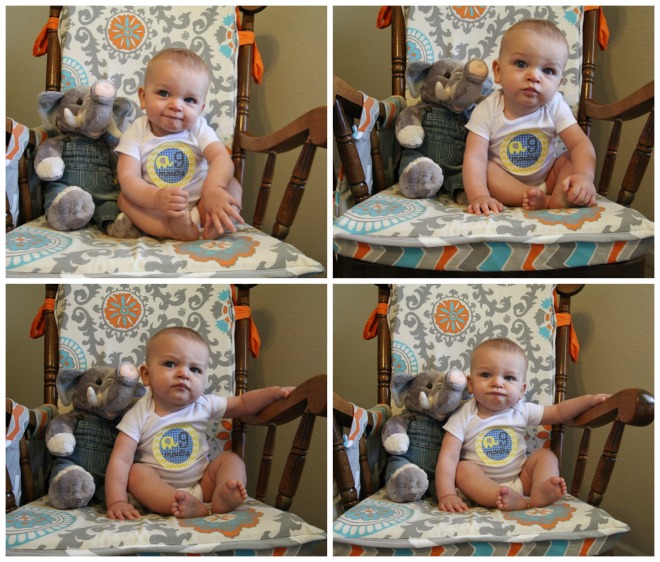 Diet: We are no longer feeding him purees at home. He still does purees at the babysitter’s purely because we have so many left over from people giving us food. I know it is easier for her to do purees to while we get him a little more used to real food at home. We are down to 5 bottles a day. Most are 4 oz, except the last bottle of the day is 6 oz. He is really good with feeding himself, so we just put something on his tray and let him have at it. He has pretty much mastered putting food into his mouth on his own. Although, he forgets when he has things in his right hand. He predominantly eats with his left hand. This month he has tried a lot of carbs:  bagel, pancakes, beef, fish, peppers, watermelon, toast, angelfood cake, icing, corn on the cob, nectarine, ravioli, baked beans, banana bread, and alfredo. He pitches a full out fit after every meal is over. It is the worst when pasta is involved. (Which makes sense because Tom and I are both pasta lovers, so he got that 100%.) If you follow me on Instagram, I post some of the after-meal aftermaths.

Clothes:  I just put away all the 3-6 month clothes this weekend. He still is ok in the 6 month stuff, but I did get out the 6-9 month stuff. He is filling those out nicely. He is in size 3 diapers.

Sleeping:  I wrote the other day that he is a through the night sleeper! He will start out on his back, but within a half hour of being put down he moves to his stomach. He stays face down most of the night. This is terrifying for me because he likes to smash his face straight down. Fortunately though, he has gotten my sleeping traits for this month, and I can go in and move him so he isn’t breathing in mattress.  He does not like to be rocked much anymore. It was a little sad to part with that routine, but we are getting snuggles elsewhere. Also I love to take pictures of him sleeping. 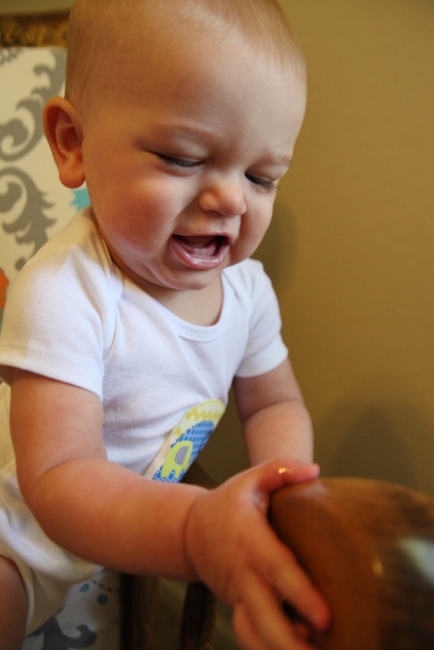 Likes: Food. Phones. Dancing; he loves to watch us dance goofy. He also loves to dance with you. We are already practicing our mother/son dance. He is enamored by straws, which is awesome at restaurants. He would rather play with the tags on toys than the actual toy. If you are wearing a watch, George will be your new best friend. He loves to be tipped upside down. He thinks it is the greatest game. Another great game is Peek-A-Boo. So much fun. Food. 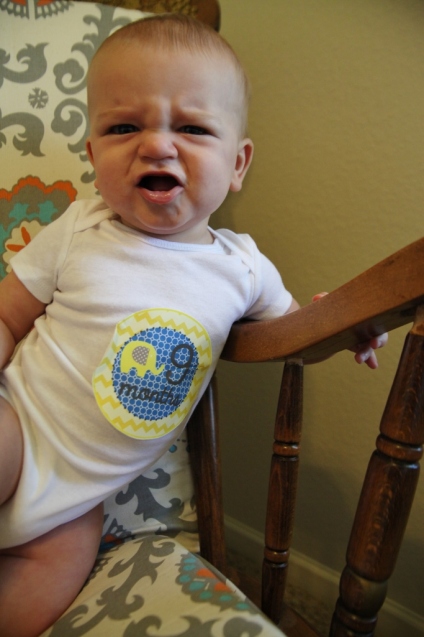 Dislikes: Meal time ending. You eating food in front of him that he is not getting. Sleeping in on weekends. Not having the controller that you are holding. That above is his displeased face.

Milestones: We got a new carseat, and he is sitting in the front of the stroller now. No more infant seat! He started reaching for us to hold him. Best feeling ever to date. He did have a few big milestones this month. He got up on all fours! He just rocks back and forth, and when he tries to move his legs or arms forward he falls down. I still am convinced we may have a walker before we have a crawler. He stood on his own a little bit this weekend, and he does really well standing when he has something to hold on to like a bench or couch. He also officially has teeth! Two sprouted up right after turning 8 months. It looks like he may get ear infections along with the teeth, but honestly he has been super mellow considering all the teething horrors we have heard. 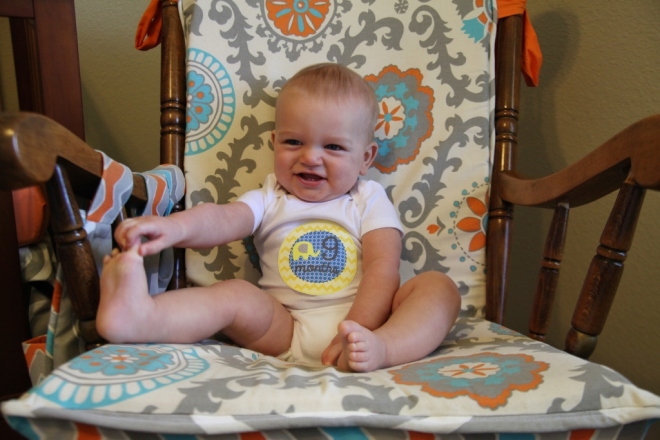 Quirks: He is ticklish! I just love his tickle giggles. He makes all sorts of noises and squeals. I feel like there is a new one each day. We are his jungle gym. He likes to crawl all over and pull up on us. He definitely remembers people now, and you get some pretty good smiles when you come back in a room. But he also gets sad if you are out of his eye-sight for too long. He also loves to twist around and belly up when his diaper is being changed or putting on his pajamas. It’s like a wrestling match trying to get his butt covered. 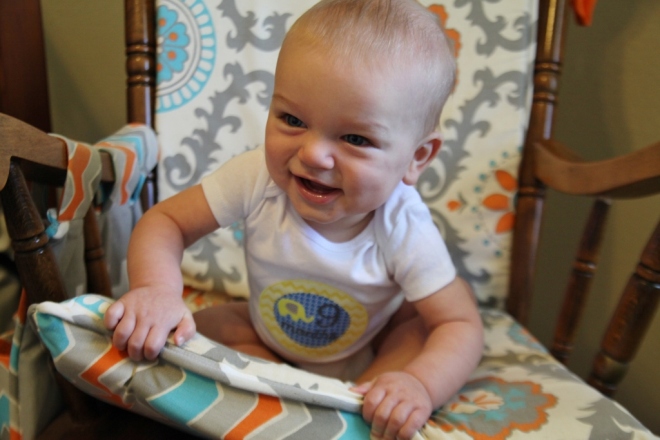 We parents are:  doing pretty good. We have had a lot going on this month so this last weekend was pretty nice to both have some extra time off at the same time. We have been getting more serious about house hunting, so keep good thoughts for us. That whole process is nerve wracking. 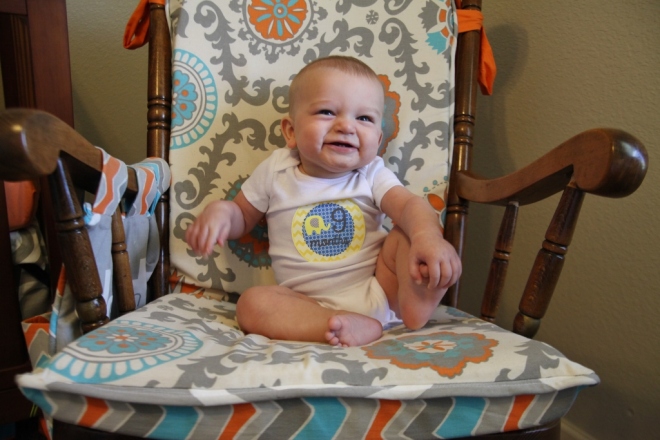 The dogs are: still being a pain in the butt. Grace has stopped going potty outside. I will have just let them out or walked them, and then she will come back in and crap under the dining room table. We created a new schedule for them to hopefully help her out. God bless her. Tom also thinks a lot of it is because we have carpet and she has made certain spots “her” spot. George loves them though. He pets them and grabs for them. When he sits with Grace, he uses her ears as a chew toy. It’s adorable. She sits and takes it because she knows that he will eventually have something she can lick up. He also likes playing with Crosby’s paws and his toenails. It looks like they are holding hands all the time. 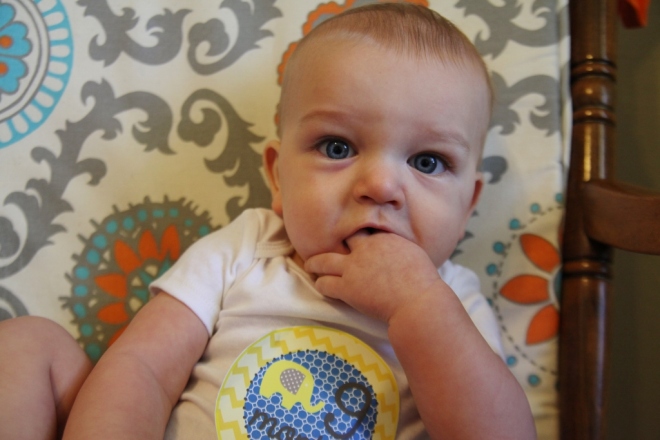 I just love him. He is such a happy boy, and he is definitely blossoming as he continues learning new things every day.