I feel like this was an extraordinary long month. So much has changed this month!

Health:  He had his first real bout of sickness this month. He barfed any solid food he ate for that entire week. We still aren’t sure what caused it because he is back to eating the same things now, so we don’t think it was allergies. He also had a heart check up this past week to monitor the issues he had from being born a month early. The holes in his heart that we had been monitoring have all closed! So we are in the clear there! He does still have some extra blood vessels to his lungs which are common in pre-mature babies because of the lungs not being fully developed at birth. Isn’t it amazing what our bodies will do? The heart specialist said that these are nothing to be concerned about and eventually they will go away. We will be discussing with our primary doctor whether to get another check up in a year or so.

Diet: He has had such a big month food wise. I was still breastfeeding at the start of the month for his first feeding of the day, but right after Easter George decided he was done. He refused to latch and just screamed and pushed me away. So instead of trying to push it, we have moved to formula completely. He is eating three solid food “meals” a day now. His typical feeding schedule is as follows:  4 oz bottle when he wakes up around 5:30am, oatmeal for second breakfast with another 4 oz bottle, lunch is a side dish of fruits or veggies with another 4 oz bottle, 4 oz bottle around 4, dinner at 6:30 is a side dish of fruits or veggies and some of our dinner, at 7:30 he has a 4oz bottle before I put him to bed, then we top the night off with a 6 oz bottle at 10pm. I would like to get where we didn’t have to do as many bottles, but unfortunately we cannot give him more than 4 oz at a time. If it is anything more than that he spits it all back up. He still spits up with the 4 oz but it is not as much. So we end up actually going through even more formula but the same amount keeping him full if we tried do more than 4 oz.The only one he keeps down is the last bottle of the day which doesn’t really make sense but it is what it is. He is doing a mix of purees and baby led weaning with solid food. Sometimes he refuses to eat solid food and will only take a puree and other times it is the opposite. He loves to feed himself with the spoon with the puree but with real food he gets impatient and wants us to feed it to him. This month, he tried blueberries, oranges, broccoli, cauliflower, spinach, corn, french toast, watermelon, cucumbers, plums, pasta in the form of tuna and hamburger helper, and graham crackers. He does not like whole blueberries, but loves them in puree form. He also was not found of the broccoli and cauliflower. He is obsessed with graham crackers and plums! 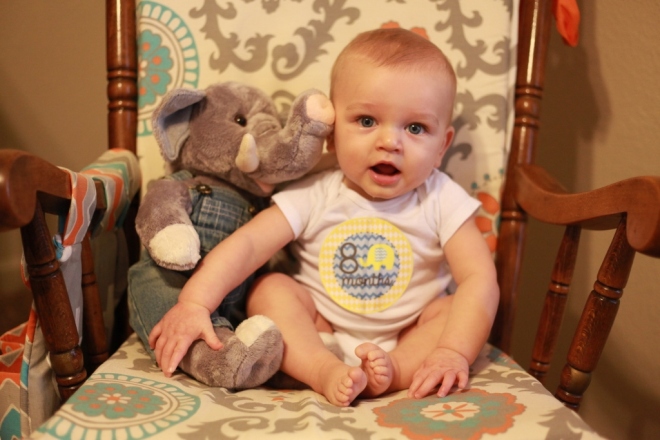 Clothes:  He is in 6 month clothes comfortably. He can still fit into a lot of his 3-6 month clothes, and we have been using some 6-9 month items as well. He is in a size 2 diaper and a size 2 shoe.

Sleeping:  We have had sleep patterns all over the place. We will have days where he will sleep through the night no problem in his crib. Then other nights he wakes up every two hours and then ends up co-sleeping in our bed because it is the only way to console him. Sometimes though just putting the pacy back in his mouth and giving him his elephant will be enough to lure him back to sleep. We have been doing better at getting him to nap once in the morning and once in the afternoon. He goes to bed at 7:30pm and then we wake him up at 10 for another bottle to help him get through the night. Both of these times it is pretty easy to get him to sleep by a little rocking and my lovely rendition of the “Star Spangled Banner.” Tom is successful getting him to sleep by just rocking him for seriously a minute or two and then putting him in the crib wide awake. I have to have him half-asleep before I put him down, so my rocking takes a little longer. He does sleep with a pacy and a stuffed elephant now. If you pull the elephants tail it sings a lullaby so that is one of our go-to distractions to get out of the room while he is still awake. 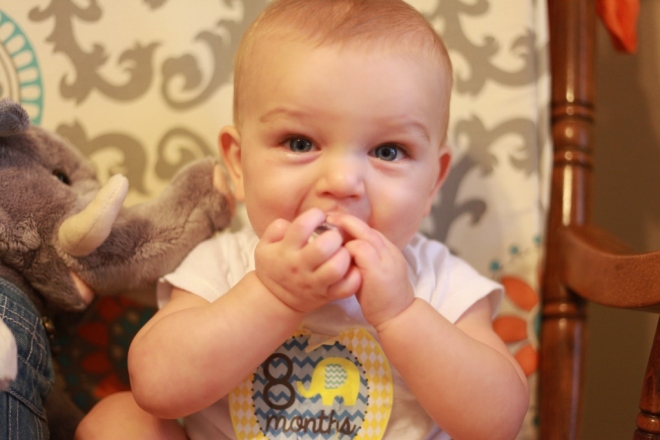 Likes: Bath time! He just started splashing this last week. I felt bad because normally Tom has been in charge of bath time, and he has been waiting for months for George to play in the water. Literally the first day Tom had his evening shift and I had to take over bath duty, George started splashing like a mad man. He gets really mad when I pull him out too. He likes to bang and shake things. He loves our cell phones. He likes to see things move and swipes things around which can get a bit dangerous when you go looking for an app later. He is obsessed with peekaboo, and you get the greatest laughs out of this. He gets laughing so hard he starts hiccuping because he isn’t breathing. He also loves when you do anything with his feet. He is really fascinated by things that turn so wheels or knobs are a big hit right now. 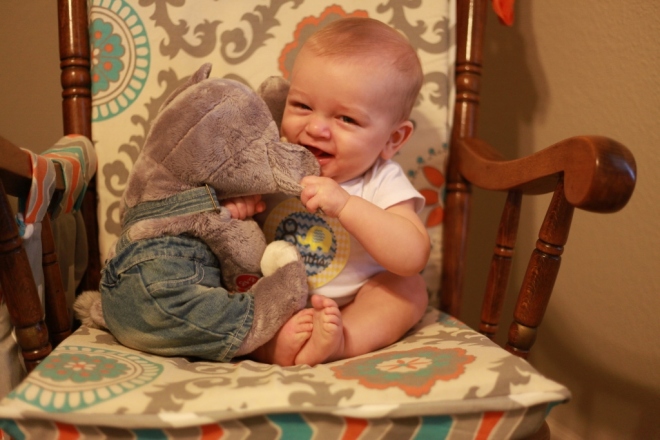 Dislikes: He is starting to hate his carseat. I think part of it may be that we need to get a bigger one. He does not like cold food or drinks, so we have to make sure things are luke warm. He doesn’t like a sippy cup yet. He gives me a look like, “WTH is this Mom?” He still hates when you wipe his face and when feeding time is over.

Milestones: He is definitely getting better control of his hands. It is so cute watching his concentration. He is starting to try to mimic us. He smacks his mouth in the popping motion if you do it enough times to him. He also will put his hands together if you clap. He hasn’t got the clapping part down, but he knows to initially put his hands together. He is now rolling 360 all the time. He rolls from back to stomach and then stomach to back like it is no big deal. He is a really good sitting and he can sort of pull himself to this position and then standing. He pulls his knees up under his chest like he wants to crawl, but he hasn’t figured out what his arms need to do yet. He also celebrated Easter this month, albeit maybe begrudgingly. 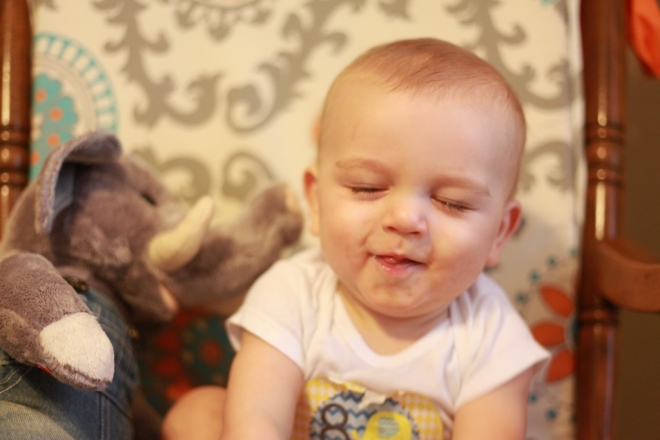 Quirks: He has found his balls. Changing his diaper is a chore now because he feels the need to stick his hands down there. Tom tells me this doesn’t stop for a long time. He “sings” at church. This is really the only time George squeals along to music. We have music on a lot around him, and it doesn’t seem to interest him like it does at church. But he is always vocal during the hymns which makes our family crack up. Just singing his praises! You can tell when he is really tired because he starts to rub his eyes or put a toy over his face. I can tell that he is about to fall asleep when he pulls his stuffed elephant to cover his face. He needs a baby sleep mask I guess.

We parents are: doing much better after the academy ended, and Tom officially started his new job. I will say that this is the first month since last summer that I have not worn a sports bra to bed. It is sooo freeing to let them breath again and not worry about liquid coming out at random times! Work has been a little nuts for me with the end of the year winding down and one of my co-worker’s last day is during finals week. So we have been working like crazy to get everything squared away for her departure. Tom and I haven’t seen each other much this week though because our schedules have been pretty much opposite so that has been a little stinky, but it meant he came to have lunch with me once this week so we could at least see each other not sleeping! 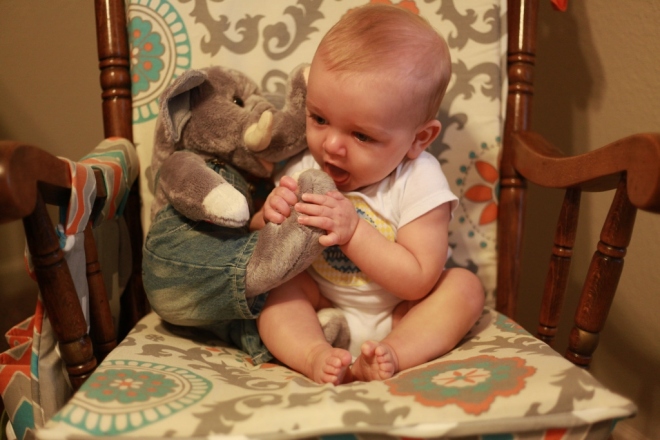 The dogs are: a freaking mess. I don’t know what is going on with them, but they are having some major issues. We have had puke and/or poop almost every day in the house. They also have gone through the trash on more than one occasion and almost destroyed another couch cushion. And it is when we are IN the house with them. You would think this behavior would happen when we aren’t home, but no they do all this craziness while we are sleeping or sneakily do it when we are on a different level of the house. It is really hard to reprimand a dog when you don’t catch them in the act. And Crosby has started barking every 10 minutes between the hours of 8-10 when George is asleep. They do seem to still love George for the most part, even more now that we are exploring more with food. Perpetual snack time in their eyes. Grace has gotten really clingy in the past week since Tom started his shifts. It’s like she is my little shadow in the mornings.

All in all, George is a really happy baby. His personality is really starting to come out as a sweet fun little boy. Each day is a new adventure as he is so curious, and you can just see his mind growing as he explores his surroundings. I have a feeling this next month will be even more fun as he grows!

It’s hard to believe that 8 months ago we started our journey as parents with a child on the “outside.” This month was momentous considering we finally got the all clear that all his early birth issues are no more. Today we are participating in a March of Dimes event because of our personal experience with the NICU. It is kind of special that the event ended up being on a “birthday” of sorts. We have so much to celebrate, and we want to give other families who have risky pregnancies or early births the same opportunity. If you would like to support our walk, please consider donating here. Let’s help all the babies! 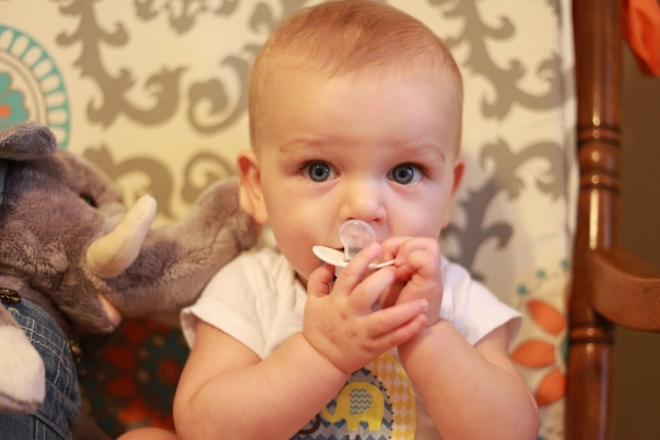