Weight: At his appointment last week he was 8 lbs 13 oz. At our home scale today he is right over 9lbs. He is also 22 and a half inches long compared to the 20 when he was born.

Health:  We did see the doctor for his acid reflux because he was just miserable. We now have medicine that seems to be helping with the comfort a little. He still spits up a lot of what he eats, but it hardly comes out the nose anymore. He does have terrible gas so that may be some of his discomfort still. Seriously he farts like a grown man, like his father in fact. We have his 2 month check up this week so hopefully he gets a good grade. We also have his cardiology appointment this week to make sure the holes in his heart have closed up. Hopefully it is a just a routine check-up from being born early. Keep us in your thoughts and prayers on that one!

Diet:  He is doing much better with breastfeeding. I have a post completely about our breastfeeding experience, but I can’t seem to hit the publish button…

Clothes:  He is still rocking newborn clothes. He is filling them out much better now. I am kind of glad that we have been able to put a lot of good use to this size. A lot of people said that he would grow so fast out of them, but we have had the opposite experience. He can fit lengthwise into 0-3 month clothes, but he doesn’t fit them width wise. It looks like he should have shoulder pads in there. I have been putting him in his Royals gear despite them being a little roomy for all this World Series goodness. Also not sure who makes baby clothes because real buttons should NOT be on newborn clothes. I also prefer the snaps on the butt to zippers.

Sleeping:  He is doing sooo much better with sleeping. I think there are a couple reasons for this. 1) We have a pretty solid routine now, so he knows what to expect. We were still trying to figure out all of his feeding woes that first month. 2) We have this reflux medicine that helps calm his stomach juices a bit which allows him to sleep longer. 3) We don’t put him in the crib anymore. We have an inclined bassinet, and the doctor said this is the best way for him to sleep until he gets over this acid reflux. As much as I would love for him to be adjusted to his crib, I would much rather for all of us to get sleep. Even when I try to put him down in it for a brief moment during the day so I can go to the bathroom, he will barf all over that crib. We’ll revisit the crib again in another couple weeks.

Likes: He loves the stoller and car rides. He is pretty fond of his pacy. (Not sure how they always go missing. Seriously, we have 6 or 7 of them, but they always seem to be MIA when we need them.) He also loves when we dance around during music time. His favorite songs right now are “Wheels on the Bus,” “Monkeys Jumping on the Bed,” “Twinkle Twinkle Little Star,” “Down by the Bay,” and “Don’t Worry Be Happy.” He also loves when Tom sings to him; so do I. He loves laying on our chests. He will fall right asleep most of the time this way if he is fussy. I think he also uses this to his advantage and knows what he is doing. He just started loving his kick and play. He stomps the heck out of those keys. 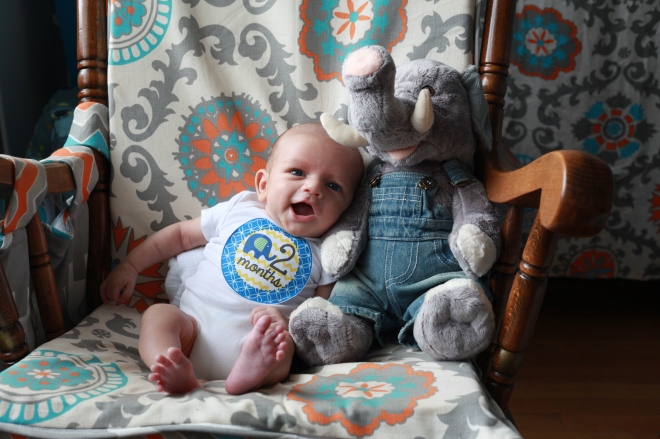 Dislikes:  He still hates being naked and diaper changes. He doesn’t like when I walk the dogs and leave him out of the fun. He also does not like tummy time unless it is on our chests. (My dislike is that he has started grasping which means he unintentionally scratches. Scratches and breastfeeding are not a good combo…)

Milestones:  He is sleeping through the night!! He started smiling at us the last week. Melt my heart. He holds his head up for brief periods of time. He can’t turn over when he is flat, but he can flip himself from his stomach to his back when he is on his boppy. He is starting to grab things (mostly my hair and tshirts). He has been grabbing his pacy and attempting to put it in his mouth. Most of the time, he misses, but he has thrown it into his mouth a few times. He also found his toes during this photo shoot.

Quirks:  He belches like me and farts like his dad. Nice to know he got our best traits. He has a lot of new gurgles, grunts, and squeals that are fun to decipher. He still has great facial expressions.

We parents are: doing great! I have been feeling stronger and much more normal this month. I just love being his mom. Postpartum hair loss is real. I am constantly shedding fistfuls of hair. It is slightly disturbing how quickly it comes out. Tom thinks that George hates him though. He feels that George cries a lot more with him than he does with me. I keep trying to tell him that a lot of it has to do with the fact that he is with George during his most difficult time of the day. And babies cry…it’s a thing.

The dogs are: kind of leaving the baby alone. They will hang out in the nursery with us, but they don’t really come near him much anymore. The novelty has worn off I guess. Crosby has learned how to play George’s kick and play piano, which is super funny to watch. Grace will sometimes give George the stink eye when he is crying.

Just throwing up those baby signs.