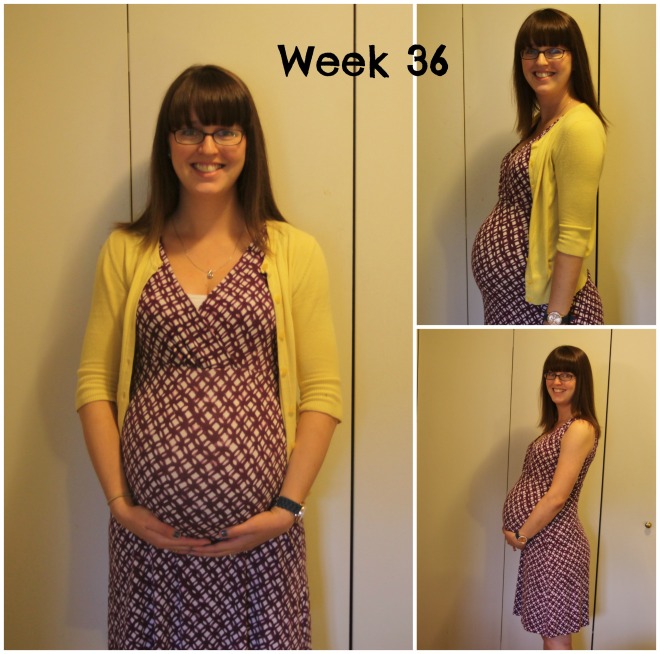 How far along: 36 weeks…He will be here in less than a month!

Sex of Baby W: He is all boy. We saw his little turtle. Also the old wives tale about little boys drying out your hands may be true. My hands have been so dry like it is the middle of winter.

Weight gain: I have gained 19 pounds. I feel gross from sitting all the time. I am packing on the pounds now, and feel like a chunky monkey. Also people are really judgy about pregnancies. Last week at one of our check ups there was a woman who mocked me for going to the bathroom several times while we waited. She said to Tom that I had no idea what it was like to be pregnant like her at 21 weeks and to just wait for what my bladder will feel like when I am farther along. First of all, I know that I am smaller, but I know that I at least look like I am 20 weeks…And secondly, I am much further along than you, and I definitely know what it feels like to be pregnant while I sit on the toilet every 45 minutes. While there are common things about pregnancies, people really need to remember that each of us will have a different experience and never say “You don’t know what it is like to be pregnant.” Do you not see this bump?

Size of Baby W: He weighs 5 lbs and 13 oz. He is closing in on how much I weighed when I was born (6 lbs and 4 oz). He should be about the size of a head of lettuce right now. We have another ultra sound this afternoon to see how much he has changed in the last week. He was in the 41% last week, which is way better than the beginning of July when he was in the 13%. If he would have been below 10%, George may have come last week…We need him to keep bulking.

Maternity clothes: Since I am no longer working, I wear yoga pants and t-shirts all the time. Also putting pants on is hard friends. I can’t really bend over nicely or I lose my balance so I have to sit on the bed to put on pants.

Baby items: We did our big discount trip with our registry last week, so we still have a few items trickling in from those shipments. We have been having fun playing with the baby monitor the past couple days. If you want to see more of our nursery you can see my posts here,  here, and here. I also will have a few more things to show in the upcoming weeks so stay tuned!

Stretch marks: Nothing so far.

Belly button in or out: I have a flattie still, but it looks like it is expanding. Sometimes though it dips back down.

Sleep: I actually have been sleeping pretty well the past few weeks. I feel like I am barricaded by pillows, but I do a pretty good job of staying asleep most nights. There are only a few nights where I have to get up to pee.

Best moment the past few weeks: George passing all of his tests and getting to see how big he is during our ultrasound.

Worst moment the past few weeks: Being diagnosed with pre-eclampsia and all the hospital visits. I have been to the hospital 4 times in the last 3 weeks and had 4 separate doctor’s visits. My blood pressure is basically sky-rocketing and I have protein in my pee, which means my liver is not doing what it is supposed to be doing. Pre-eclampsia happens to many women during pregnancy, and there really is no rhyme or reason why you get it. I never had high blood pressure before in my life. The concern though is that if it is not monitored it can turn into eclampsia which causes seizures, which you can guess is super bad for baby. Luckily my blood tests are coming back normal so we are still in the just monitoring phase, but this is something that could change fast and without me noticing. The thing is I feel fine, so it is hard to know what your BP is doing. That is why it is called the silent killer. Not terrifying at all for someone who is supposed to keep her blood pressure down right? So I am on bed rest to hopefully keep things calm. However, what bed rest does is just give me time to focus on all the bad things that could happen and stress myself out! We go in twice a week for two different tests now. One test is a non-stress test where George has to move so many times in a 20 minute period and they watch his heart-rate to make sure it is reacting properly. He has passed the two we have had so far. They call him a happy baby every time, which makes me happy. The second test is with an ultrasound, and again George is being tested. They check for several different things that he does to make sure he is growing on track. The only thing he didn’t pass was the practicing breathing. The doctor said this is pretty normal since they aren’t doing this around the clock, and she has seen him hiccup in other appointments. He did enough of the activities to pass the entire test though, so that is a bonus. Because he is doing well in there, we are trying to keep him in the incubator just a little longer and will monitor my body for any other issues. We will not be making it to our due date (Sept 15th) though, and we will be induced at least by 39 weeks if it doesn’t happen naturally otherwise. It may be earlier if I keep sucking on my tests. Hopefully we can at least make it to next week because 37 weeks is more of a safe zone for a delivery. I just need to get myself under control, but it looks like he will be an early September or late August baby! The doctor is pretty hopefully that we will still be able to do everything naturally (besides the induction part to get it started), which is great because I want to avoid a c-section if I can. We have been really blessed with the amazing care we have received throughout the entire ordeal. It’s just all a little stressful to sit and wait and hope for the best.

Miss anything: Not being confined to my couch. I also miss seat belts fitting normally. The way it lays now because of the belly, it cuts off my boob and feels like it is strangling me. Also I miss my boobs not touching my belly. I don’t have big boobs at all, so this has been VERY weird and uncomfortable to get used to. Like seriously, boob sweat is awful….

Cravings: I haven’t really had any the past few weeks.

Movement: He is pretty active still. He normally perks up a little more after I eat. I can also play with him a little if I am concerned about him, so he is really reactive to people pushing him around (which is great for all these tests). It was also fun to actually see his foot that he likes to push in the same spot on my right side during the ultrasound. You never really know what body part that is that is poking you, so it was cool to see it was indeed that big foot of his. He also favors sitting on my right side more than the left, which has made for some pretty awkward belly shapes the bigger he gets. Lately, he has been getting hiccups so hard that they hurt me a little bit. He also gets hiccups a couple times a day now.

Symptoms/how I am feeling: Besides going stir crazy due to this bed rest, I have had a few other issues that are related to the pre-eclampsia. I have had some blurred vision and headaches. I also have had some upper abdominal pain, which is what has sent me to the hospital a couple times just to be safe. I have been pretty lucky that I haven’t had any swelling though.

Looking forward to: Little man making his debut! I can’t believe it is almost here! Our plan is to have everything George ready by the end of this weekend. We are almost there! We also had to move our maternity pictures since Tom had staff duty the day we were supposed to have them. Thank you last minute planning Army. I really hope we make it that long to have them on our rescheduled date!

Since we aren’t sure how much time we have left, this may be my last update. Depending on how much notice we have, I will try to do one last update before we deliver. But no promises friends.