If you missed the first few parts of Whitener Wednesdays, you can read the first three parts of Tom and I’s love story here, here, and here.

Today’s episode is all about…you guessed it:  The Engagement.

I left off last week with a trip to Savannah before our big move to Ames, IA.

Let me give you a brief back story before I get to the engagement story. Tom and I had only gotten back together about 6 months before this trip to Savannah. We both knew we were going to end up getting married, but we discussed that we would not get engaged until we lived in the same zipcode for awhile. Tom was very adamant about this fact, and I agreed that it would be a good idea. I was pretty adamant with wanting to physically go ring shopping together in person before Tom decided to pop the question. I wanted to ensure that he didn’t pick out something that was way too big and not my style at all. Maybe the month before this trip, I had started looking at ideas for rings to know what we may be getting ourselves into before we went to a store.

But again, we had agreed that we would wait until we lived near each other to make this trip to a jewelry store.

We had planned on making this trip to Savannah as carefree as possible, which meant that I was not allowed to make any definite plans. We would just do anything that our heart desired that particular day. It was to celebrate the end of grad school and a new chapter of being in the same time zone again.

So the first night we were in Savannah, we had a nice dinner (where we found out Mint Juleps are gross). Tom suggested we go find a mini-golf place, which is something we always do when we travel and were some of our favorite dates in Kansas City.

We tried finding several on our GPS but each place no longer existed or we just weren’t the best navigators.

It was also at this point that I started to get a severe case of food poisoning. So it was back to the hotel we went because my insides were on fire and did not want us to have a good time.

The next day, I still wasn’t feeling great. Tom, however, was very insistent on going miniature golfing. It was very uncharacteristic of him to be some emphatic about our plans, and my sick brain just wasn’t getting it. We actually got into a little bit of an argument because I thought we could just go another day, and I thought we weren’t making any plans. Tom, however, said we had to go that night and promptly went to the concierge to find out where a real mini-golf place was.  He was very persistent.

So I put on a smiling face and tried to be pumped about mini-golf which we did find on the first try.

It was kind of a lame course, and it was being over-run by 8th graders hopped up on energy drinks and sweets.

This whole time I am trying to be positive and not roll over from dehydration, and Tom is cursing under his breath at the teenagers. He was so visibly upset the whole time, I just tried getting out of there as soon as possible. I think our night was even further soiled when on the last couple holes, some kids started putting AS WE WERE STILL GOING! Seriously, our balls were still on the green and they just started running over us.

We went inside the arcade to cool off on a few rounds of skeeball and try to win some tickets for a way awesome prize (if we were still in elementary school). When we went up to the prize counter, Tom said, “Hey, here is an engagement ring for you,” as he pointed to a plastic ring in the glass case. I just rolled my eyes at him and walked to the car.

We were both kind of spent at this point. I was still exhausted from the food poisoning. And I thought Tom was just being paranoid about the middle schoolers. He had been acting really strange all day.

We ended up going to the river walk to watch the sunset and just relax. As we sat on a bench there, a street musician started playing nearby, a saxophonist no less.

And then I am not really sure what happened. It was a blur.

Tom was on one knee and said some things. As I registered that he just asked me to marry him when he pulled out the ring, I slapped him in the face.

I was in shock and thought he was pulling a prank since we had agreed not to do this until we went ring shopping together and lived in the same city! This wasn’t really happening!

In fact, it was. He had to repeat it and he apologized for not doing it on the mini-golf course, but he didn’t want it ruined by those punk kids.

Obviously, I said yes and apologized for slapping him. 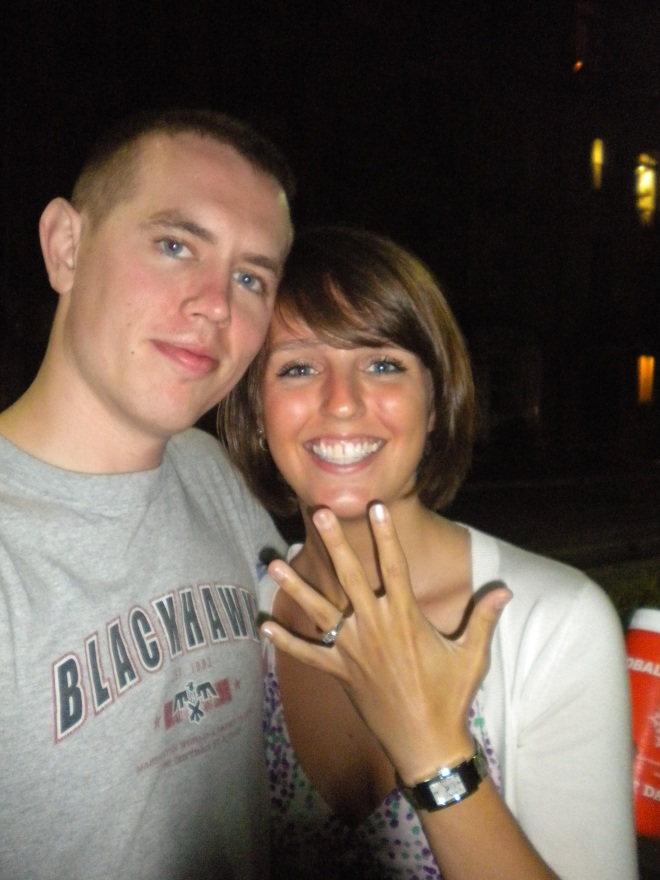 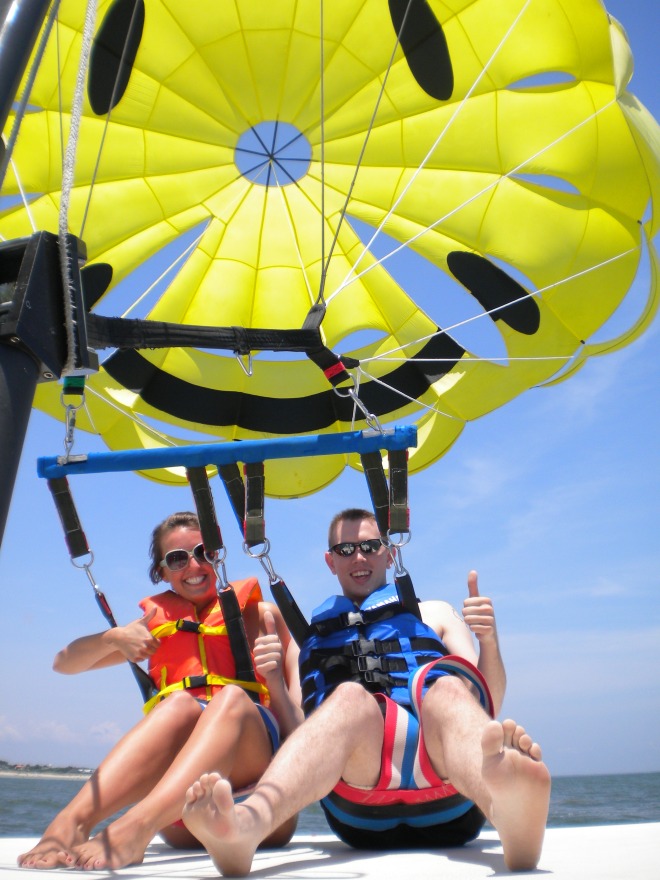 Anyway, so that is our fun engagement story. Tom had it planned for months. He had gone shopping for a ring long before I was looking and just made up that rule about living near each other to throw me off track. He told all of my grad school friends before graduation a few days prior to our trip as well as my whole family. This also explains why he was so nervous. He had the ring in this backpack (in a waterproof box) the entire time because he was afraid something would happen to it, and he wanted to ask early in the trip so he could just relax the rest of the trip and celebrate our future. I just thought he was being a weird end of the world prepper with the back pack the whole time since he wouldn’t let it get farther than an arm’s length from him.

So much for our no-plan trip…

I had no idea. Complete surprise, and I love it that way.

We quickly started making plans for the wedding to be the following summer. A year was a great timeline to plan especially considering I would be in a new job, and that gave Tom time to finish his degree and find a job in Iowa as well.

He had been job searching as soon as I found out that I had the job in Ames in April. He was scheduled to graduate with his Bachelor’s that December. So we signed on for long distance just a little longer since a job didn’t pan out by the time I moved to Iowa in July. 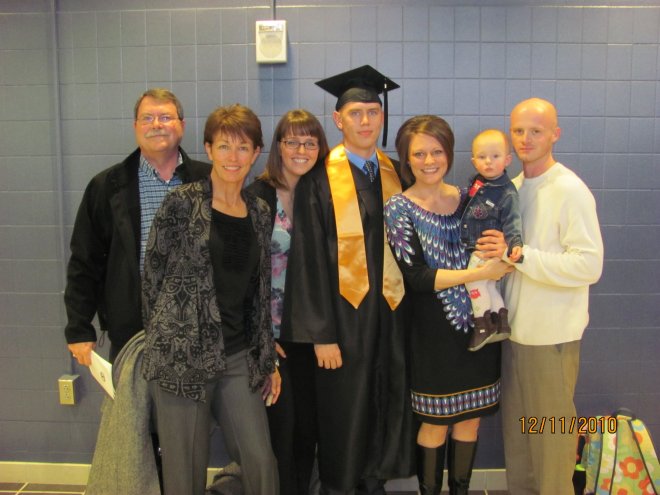 He kept job searching, but the economy was not great back then and so many people applied for one police position in a department.

He did join me the semester after he graduated without a job, but with some great prospects. We were just sure with our connections and his experience that he would have gotten a job in Ames and were willing to bank his move on it. 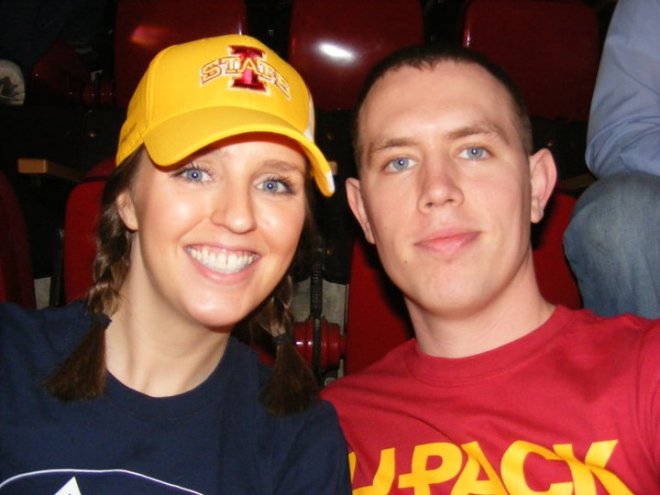 All this time, we planned the biggest party to celebrate our nuptials that June.

Unfortunately, the months kept passing, and Tom was not able to find a job like we thought. It was a very frustrating time seeing our dreams within grasp but not being able to reach them as we had thought.

So here we were, 26 years old, ready to walk down the aisle but with an unsteady future ahead of us.

Come back next week to hear about our wedding day!

Did you have a knee-jerk reaction to your proposal? Did it happen as you thought? Or have you already dreamed up your future proposal?