This year and this girl.

She has been loving on us for a whole year. She is everything I hoped for and more.

Health: This month she has been fairly healthy. I do think she has allergies because we all got hayfever with the crazy pollen. Everyone’s eyes were a little puffy for a few days. She is still working on teeth. She has a total of 7 now, with a couple more on the way. I love the little toothy grin.

Diet: I BREASTFED HER FOR AN ENTIRE YEAR!!! Whoop whoop! I really honestly cannot believe that we actually made it this long. I will start weaning her off over the next month. The only time she is actually interested is the first feeding of the day, so that will be the last one I cut out. During the week, I nursed her in the morning and before bed. She only had two bottles during the day while I was at work. One of those was typically a formula bottle. Depending on how well she nurses at night, she may get a 2-4 oz formula bottle before bed as well. On the weekends, for the most part we avoided the formula and nursed the whole time. She is eating three full meals, and generally eats what we eat. I hope that we can keep up the good eating habits. I mean she ate salad greens this month!

Sleeping:  We have been putting her to bed around 7:30/8. She generally stays asleep most of the night. She hardly sleeps past 7am. She still has two naps a day, and she is really sticking to two hour naps. It will be interesting to see how real milk will change her patterns.

Likes:  I am fairly positive that she would live upside down if she could. She loves to be dipped. She is really into stacking things. She is loving the “That Not My” book series from Usborne. She loves George. He can always make her laugh, and she is starting to follow him wherever he goes. She is going to be into music; with whatever is playing, she is dancing. She loves playing with plastic bottles. She beelines it for outside whenever the door opens. She likes George’s trucks.

Dislikes:  She does not like to be done eating. You better have food on her tray. She still has a general disdain for most people. (Her party could be interesting tomorrow…) She does not like the word no. She is not a fan of when the dogs are barreling through the door. She is pretty much done with the day at 5. She can be kind of grumpy if she isn’t eating at this time.

Milestones: She has taken a few unassisted steps! She won’t do more than 3 steps, but she does them! She still crawls so fast, so she seems uninterested on going any further.

Nicknames:  Daphers, Daphie, and Daphie Girl. The two most common are still Daph and Sister.

Quirks:  She likes to pass things to people. She loves sharing her pacy with people. She also likes to use anything as a walker: books, chairs, buckets… She likes to pull things off the shelves or out of containers, but then tries to put them all back. 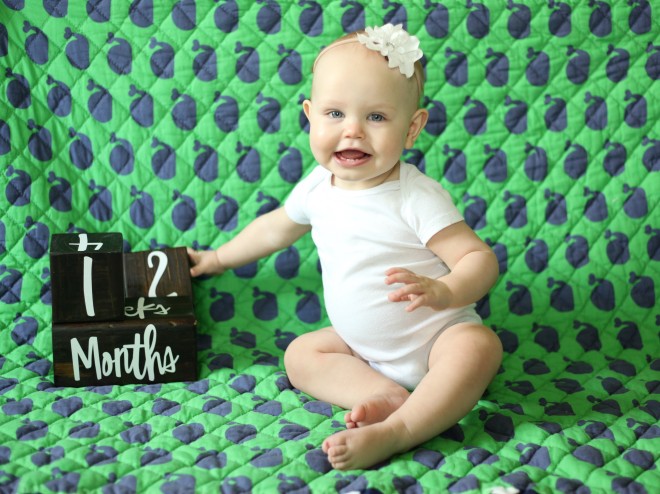 We parents are: still tired. It’s been a crazy month with various things in our world. We are building a playground for the kids, and by we I mean Tom. It looks amazing so far. I had my 33rd birthday, and we got to see Lion King live! So good! I also had two people (grown people that I work with) ask me if I was expecting again, so there is that…I had lots of feelings about it at first, but I am really trying to not let it get me down like the time I cried after my niece said something similar when George was 9 months old. (Not my best moment…) I am proud of what my body is doing. A HUMAN SURVIVED OFF MY BODY FOR ALMOST TWO YEARS. It’s ok if there is still some extra to love around me!

George is: such a ham. He will have really good days, and then some really bad not listening ones. And he has been really into screaming lately because he has “loud in his mouth.” He also has been commandeering Sister’s pacies and hiding them in his room or hiding himself while he “gets it wet” for Daphne. He said he has to test it out for her. We are in trouble with this one. He LOVES that we are outside almost every day. That has helped with some cabin fever. He is getting really good at writing his letters. He makes up his own songs. I am so proud of how much he has learned!

The dogs are: ridiculous. They are pretty much barking at everything these days. Crosby wants to be outside all day. They are a mess, but we love them anyway.

I thought George grew fast, but this time was such a whirlwind. While it was tough, I feel like we enjoyed the process more and were much less stressed this time around. Daphie has been a fairly easy baby, so that helps. She is such a dream. Even though these little baby features may fade, I am excited to see her personality continue to develop.

Daphie Girl, you are such a light in our days. I am honored to be your mom.

Here is George at 12 months.

As George said right before this, "Wally you need the Elf spirit."
I've lost count how many times we have made this trip, but it's definitely one of my favorites. Bring on the Christmas season.