It’s going too fast. How do I have a three month old?

Health: For the most part she is doing really well. The probiatic drops have been helping her not be so gassy and fussy in the afternoons, which is great! She was diagnosed with torticollis. Basically this means that she has a head tilt to one side, so she will mostly look or lay to that side. In her case, she prefers to rotate and tilt to the right side. I noticed that she was getting a flat spot on the back of her head and the beginnings of a misshapen head. I brought it up to our pediatrician, and she referred us to a physical therapist. This can happen for a variety of reasons, but whatever the reason when they tilt predominately to one side it causes the muscles to only get stronger on one side so it exacerbates the issue. So we have been working on environmental changes like changing the direction that we change her diaper and how she lays in the crib so she will start looking to the left more. We also have some stretches that we do every day again to get those muscles more evenly developed. Both our doctor and physical therapist seem confident that we can remedy it this way and hopefully avoid a helmet later on. She still prefers the right side, but I can see a difference over the past month after being more diligent with the environmental changes and what not.

Diet: She is still breastmilk only. She is doing much better on taking bottles, and so far I haven’t noticed an issue when she nurses with the transition. She isn’t comfort feeding as much now, which is a relief. You can tell by her cheeks she is doing just fine getting what she needs. I also have to brag on myself, because I have been much more easy going about our breastfeeding experience this time around. I have fed her in public on several occasions which is something I never did with George. I think a lot of it has to do with the thought of normalizing breastfeeding and not wanting to stop living our lives due to her feeding schedule. But I also have the best nursing cover that is so easy to use and makes me feel comfortable and covered in public. My goal is always to just make it to the next month, so here is to month 4!

Clothes: She is fitting perfectly into 0-3 month clothes. Most 3 month things are still way too roomy for her. She is in a size 1 diaper. I was able to put on her first pair of shoes last week! Get ready girl.

Sleeping:  Those probiatic drops have helped so much with her sleep during the day. She takes several hearty naps, usually at least three a day. Then we put her to bed at 7:30 pm and she does not wake up until 6:30 am. PRAISE! I don’t know how we got so lucky with two really good sleepers. So good, and I will ride this out as long as we can! 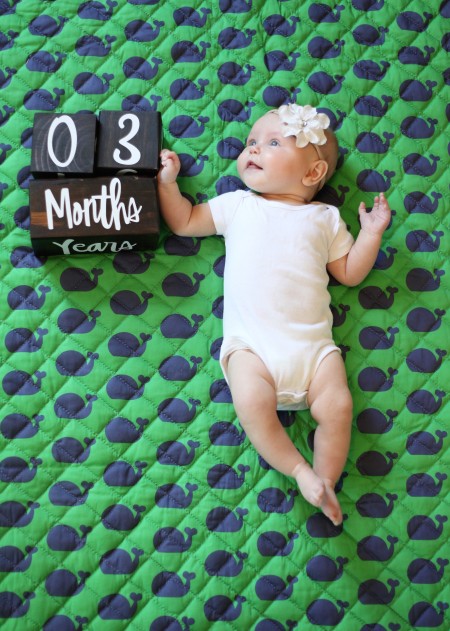 Likes:  Eating. Riding in the car. Kick and Play. Mornings-She has the biggest smiles for me when I sing to wake her up. I love singing “Good Morning” from Singing in the Rain, and she loves it too. She also likes her head to be rubbed, and she has the best peach fuzz to do so.

Dislikes:  She does not like a dirty diaper.  She hates the hours between 5-7pm. Dinner is always interesting, and I spend a lot of time eating standing up because she knows when you are sitting while holding her. She is not a big fan of her swing. 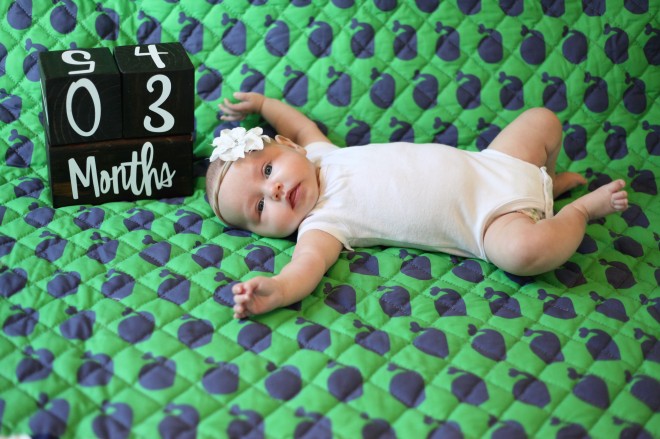 Milestones: Started rolling from tummy to back. Being away from me for more than 4 hours. She went to her first baseball game! We may have lost but I think she still enjoyed herself.

Nicknames: Sister Friend, Doodlebug, Sweet Cheeks, DC, Daphie, Daph, and Daphne June. Most of the time it is Sister.

Quirks:  She is very empathetic already. She can read people’s emotions well, and she plays off that. She is ridiculously strong. She is trying to sit up already. She has the best pouty lip.

We parents are:  doing alright. We are on opposite shifts, which is always hard because Tom misses out on a lot with the kids. We also are still trying to get some things done around the house, so our days off are filled to the brim. If you aren’t following me on Instagram-we knocked out several walls in our living room this week. I went back to work this month, so that has been a transition for everyone. The house is a little less clean and I’m a little more tired, but all in all it’s been a smooth move back into work. 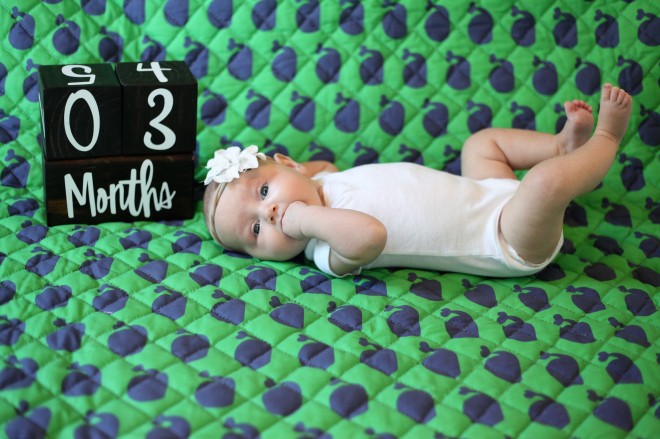 George is:  a great big brother. For the most part he had been ignoring her, but we have seen a dramatic change in his demeanor towards her once she started going to the sitter’s with him. We were really worried because Brenda’s is his place so I wasn’t sure how he would react. He had been telling me that Sister needed to stay in the car when I would talk about her coming with him. But the last two weeks he has been so wonderful about the transition. He is overly protective of her, and won’t let other kids near her saying, “She’s my sister.” He lets adults know when Sister is crying, and is persistent about the information until you deal with it. He tries to console her now too which is so sweet. Sometimes he is sweet and says, “It’s ok Sister.” Other times he sings to her. Other times he likes to shake her play yard toys over her head (kind of aggressively) and says, “You calm down now.” When he is fed up with me, he uses Sister as an excuse to get rid of me-“You need to go feed Sister.” He does not know how to say her actual name; he thinks we are saying Daddy. So her name is Sister.

The dogs are: doing their thing. Grace stalks Daphne when she is on the floor to lick up spit up. Crosby does seem to protect her and will lay at my feet when I am feeding her.

Here is George at 3 months. 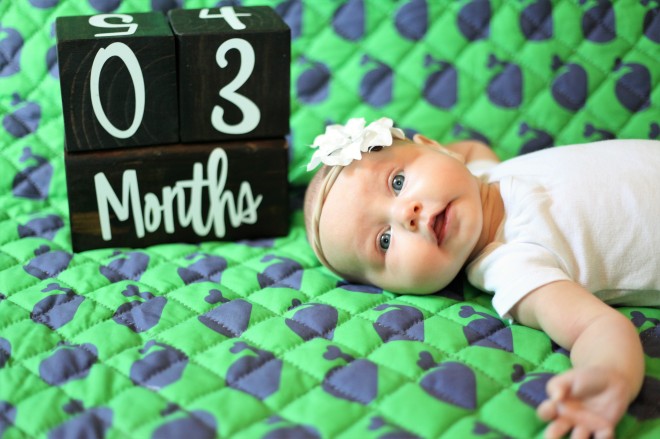