Health:  He has been pretty healthy this month. We have been battling some pretty awful diaper rash, and we cannot seem to find something that helps cure it. (We have tried coconut oil, bourdreaux’s butt paste, and baby powder.) He has been a little raspy and snotty this week so there may be another tooth coming soon since this is what proceeded the last two. We are still only at 2 teeth. He is still spitting up after he has formula. He doesn’t do it with anything else, just that dang formula. (He did it with breastmilk too.) Our doctor thinks he is just a happy spitter, and he will eventually grow out of it. He doesn’t seem to be effected by it; it just dribbles out 5-10 minutes after he has finished a bottle. And it doesn’t matter if he has 2 oz or 6, so it is not a matter of being full. It’s obnoxious, not happy. 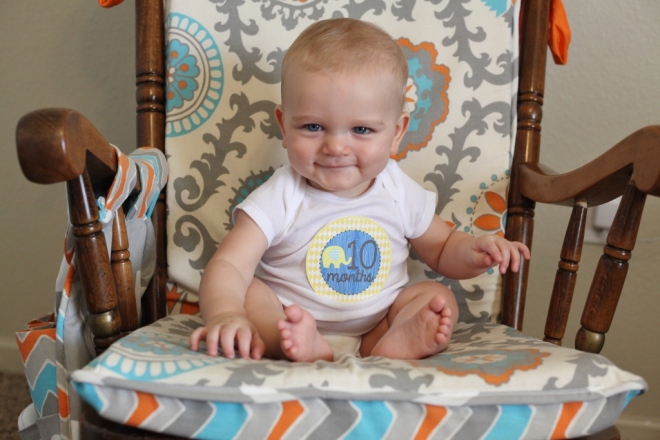 Diet: He eats what we eat. We have dubbed him Carbisaurusrex. He eats pretty much anything in sight. His hanger issues have gotten so bad that we have to hide food as we are preparing it or he gets a fruit/veggie pre-dinner while we are cooking. And forget him seeing a bottle without it being in his hands-tantrum galore. Then you have to ignore him as he pitches a fit when meal-time is over. It’s hard to keep track of all the new things that he has eaten now, but he is basically eating like an adult. People think I am kidding, but he eats as much as I do at meals. He can pack that food away. There hasn’t been anything this month that he hasn’t liked. He was a BIG fan of Red Lobster. All the other patrons got a dinner and a show from George’s eating antics. He is down to only three (4-6oz) formula bottles a day (morning, before afternoon nap, and right before bed). He has three traditional meals a day, and several snacks throughout. We are also transitioning him to a sippy cup with water and milk.

Clothes:  He is wearing 6 month and 6-9 month clothes. Some are getting a little snug so I may be digging out the 9 month stuff here in the upcoming week. He is in size 3 diapers. For as much food as he is eating, I am really surprised he hasn’t had to move up clothes faster.

Sleeping:  He is still doing fairly well with sleeping through the night. We put him down at 7:30, and I would say 90% of the time he is asleep within 5 minutes of being laid down. Then he stays asleep until 5ish am, even on the weekends. He does NOT want to sleep in, unlike his parents. And normally during the week he is my alarm clock instead of the mechanical one I have set for 5:40. He still is napping pretty well twice a day, although one is typically much longer than the other. You can definitely tell when he is getting tired; he starts rubbing his eyes. And when I am singing him his nighttime songs he has to stick his hands in my mouth. Then he giggles when I sing long notes as he is trying to hold my tongue. I guess it is his new bedtime game because he doesn’t really do that any other time that I am singing with him. 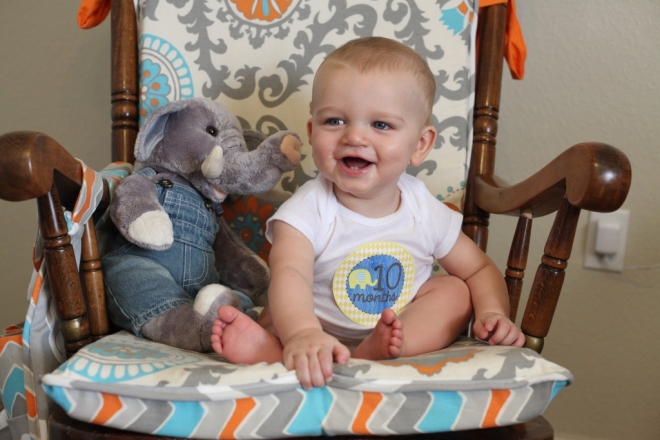 Likes: Food is still pretty much his favorite. He loves his new walker and trying to make it light up. He loves to stand and try to climb on things. He loves his little play mirror. He loves to dig in his laundry basket. I may have to hide it in the closet he loves it so much. His singing books are really fun for him. He loves to get his teeth brush. I think it tickles him, so he just giggles the whole time.

Dislikes: Diaper changes. It’s like a wrestling match trying to get a diaper off and on. I am surprised we don’t have poop smeared everywhere. He also tried to dive off the changing table the other day, little wiggle monster. He hates seeing food that is not his. At Miss Brenda’s, he does not like his sippy cup to be empty. He throws it across the floor when it’s empty. Generally, he does not like it when he doesn’t get his way so hearing no is not his favorite thing. (He may have gotten a little anger streak from him parents.)

Milestones: At the beginning of the month he was flip-flop crawling, but two weeks ago he actually started crawling. And he hasn’t stopped moving since. He can fully bring himself to a standing position too. He can’t stand completely without holding on to something, but he is making a lot of efforts to do so. So I think solo standing is going to happen here very quickly. You can tell he wants to so badly. Also seeing him standing in his crib on the monitor has to be one of the most terrifying things. He isn’t talking yet, but he yells at you and sings. He is also throwing temper tantrums, so his cognitive level is rising. We aren’t using the pacy too much now. Most days he only has it when he goes down for his bedtime. I don’t even remember the last time Brenda has used it with him during the day. She is much more hard core than we are, and we use it more on the weekend because we are softies at this point. We do take a pacy still with us when we are out of the house just in case he throws a fit, but generally at home he doesn’t have it until bedtime. Unless we are taking pictures… 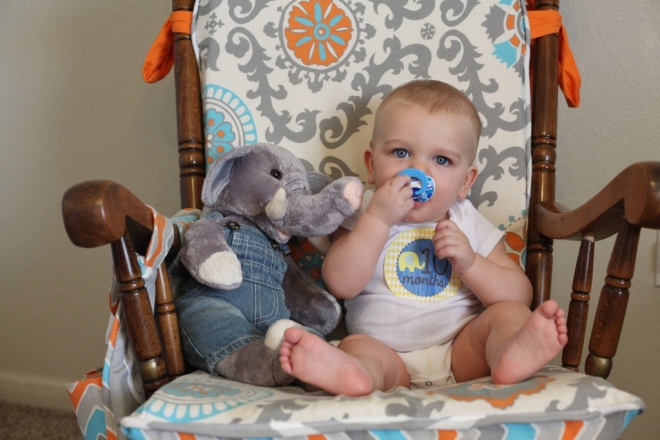 Quirks: He pants like a dog when he is trying really hard to stand. When he sees other people, he will bury his head in my shoulder like he is trying to hide. He has figured out how to turn on the radio and is pulling all the books off the shelves. Needless to say, he likes to change the landscape of his room. 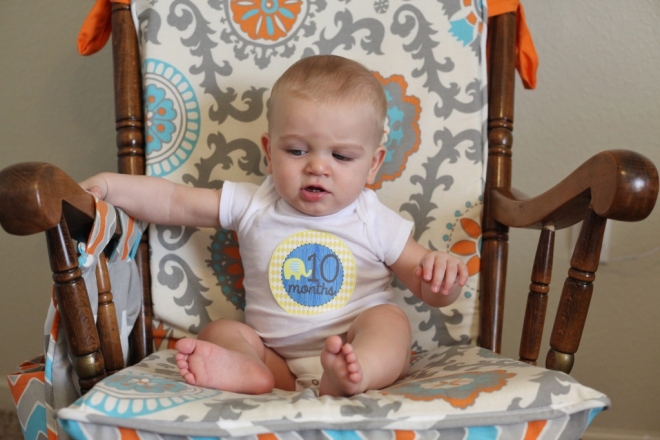 We parents are:  pretty great. I am losing hair due to George’s pulling it all out. We are actually having to parent George now that he is more mobile. I think I say, “No” or “Stop” more than any other word in my vocabulary. We are trying to teach him there are many things he can’t do yet…Tom’s schedule has been pretty great this month, so I feel like we have gotten more time together. 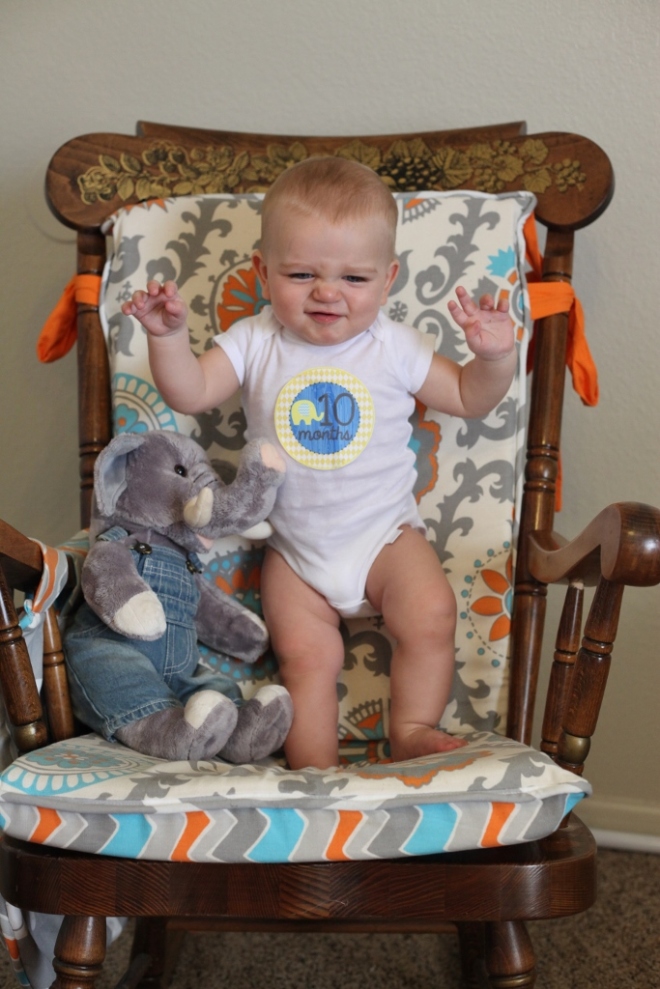 The dogs are: sooo sweet and patient with George. His relationship with them has changed dramatically since he can crawl and climb. He is all over them ALL THE TIME. Crosby just sits there and takes the abuse, even the innocent ball pinch…Grace tries to make out with him hoping for some food/spit up remnants in those baby folds. George also tried to eat their dog food yesterday, and is very made that we would not let him. They share the dinner we give George which I think has solidified their BF status. George thinks it is funny to feed them his food. (But then he gets mad at us when there is no food on his plate.) The dogs have done a really good job leaving George’s toys alone, even though George now thinks the dog bones are his toys. 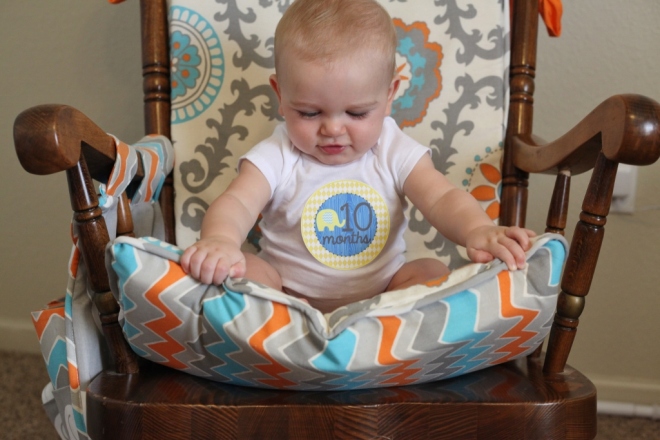 In two months, we will have a ONE YEAR OLD! I have his birthday already planned out. We just have to make a few things and then wait for the day. I am already so excited to see it all come together. But I also want to freeze time because there is no way I am actually ready for that.