How has it been 5 months? 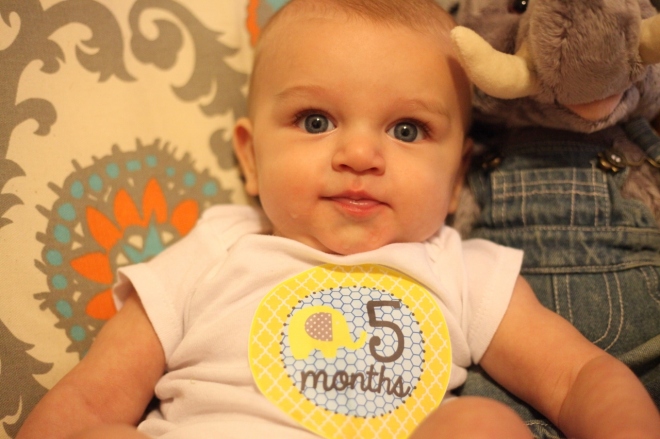 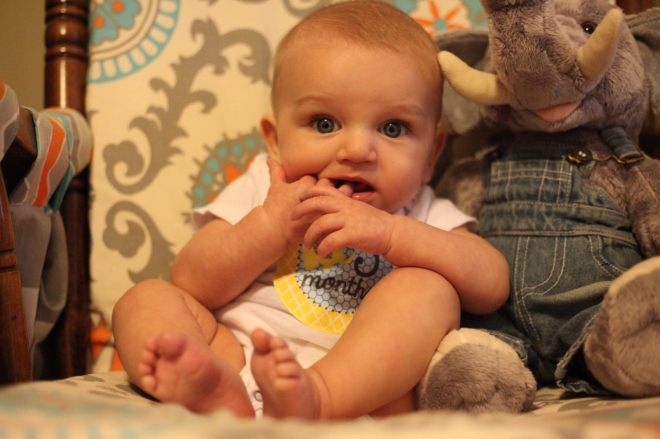 Health:  He still has problems going #2, but the doctor said it was nothing to worry about at this point because there is no blood in it. She said he may just be a gassy baby. Other than that he is a happy drooly baby! 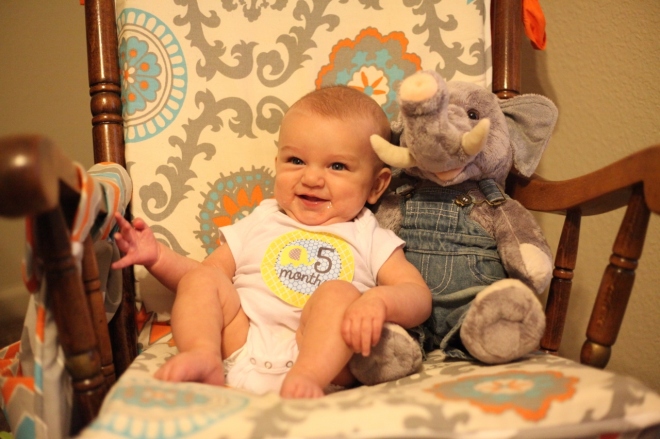 Diet: He is still mostly on breastmilk. We have a bottle of formula before bed. This month has been really hard breastfeeding wise. I know that I am not making enough. I am still barely making enough even with pumping during the formula feed. Most days I have one pumping session that I get less than an ounce, and most others are not much more. George eats at least 4 oz per feeding. Watching my supply basically start to dry out and having to pump/feed almost every 2 hours, I have decided that this will be our last month breastfeeding. Unless something drastically changes, I plan to start the weaning process once he is 6 months old. It has become more of a burden and it is taking too much time for what I am pumping. Or not pumping. I don’t feel like it is fair to keep pushing both of us to do this when it obviously is not working well. It just makes for one un-happy and guilty mommy. (George could care less as long as there is something in his belly! He is a mess otherwise.) I have tried all the tricks so believe me there really isn’t much more that I can do to increase my supply. Some women just aren’t able to breastfeed because of the supply, and their bodies never adjust to the demand. Despite my best efforts, I happen to be one of those women. I feel like there needs to be more out there for women who try but cannot make the supply. I feel that it is very polarized: either you formula feed or you are an expert breastfeeding with supply galore. It has been very stressful and hard to find material out there for those in the middle. I think there is also a lot of negativity for those who stop “early” too, so I want to say power to all moms for however long you try. Breastfeeding is not an easy journey, and I don’t want to feel guilty for stopping now. So we will happily make it to 6 months. We plan on starting our solids adventure around then any way, so we feel that it is the perfect timing to end our breastfeeding journey. There is a huge weight lifted off me now that I know there is an end in sight. While I am glad that I was able to do it, it is a struggle that I am happy to know will soon be over. I will say cutting holes into my sports bra has helped tremendously while pumping. It makes things much easier to do both at the same time hands free. So that was an improvement this month. We did try rice cereal this month, and he HATED it. We have tried both spoon fed and bottle fed, and he did NOT want to have anything to do with that rice stuff. 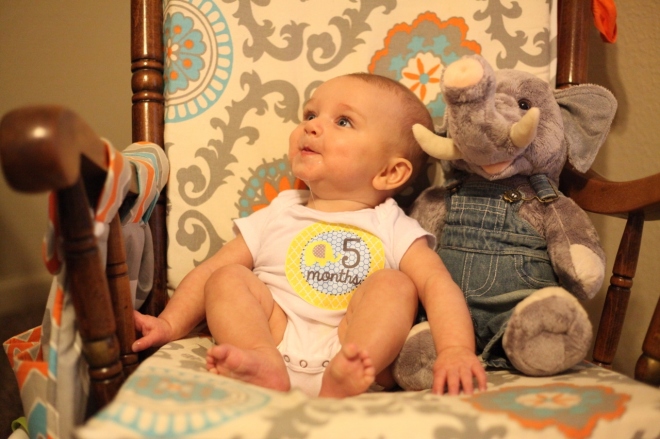 Clothes:  We are still in 3 month clothes. I wouldn’t be surprised if we are still in them next month either. We are in size 1 diapers right now. By the end of this week, he will be in size 2. And that is mostly because I don’t want to go buy more size one since I know he has almost grown out of them, and we are down to our last stack this week. He also started wearing shoes when we go out on the weekend. It makes him look like such a big kid! 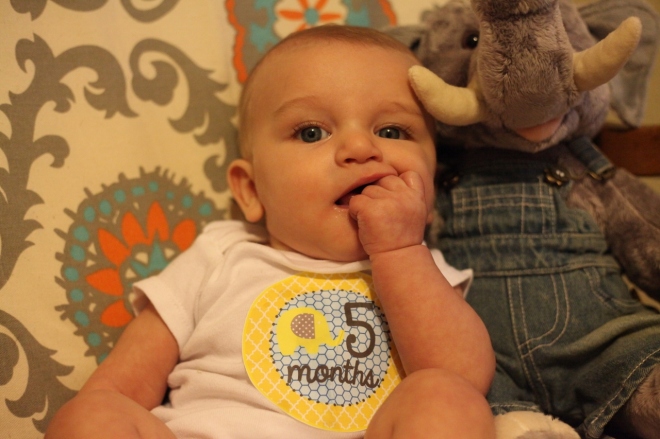 Sleeping:  I think he is going through some sleep regression. We have a pretty good routine for bed time. I read him a story and lure him to slumber. Then he wakes up, and Tom has to take a crack at it. It usually takes us about 30-45 minutes to get him to actually be asleep. Unfortunately, he has started waking up around 4am, wide awake and hungry. It’s that awful timing that if I feed him and get him back to sleep I have about 30-45 minutes to sleep before I need to start getting ready for the day. So we end up just staying up. We tried switching his bedtime to 8 pm earlier this month and that just didn’t work for us. It took us even longer to get him to sleep and then he was getting up at 2 or 3. So his bedtime stays at 9pm for now. He is really funny about naps. He definitely gets cranky and will fight going to sleep. The only way we have gotten him to sleep for naps is by having him lay perpendicular to my stomach so his face his buried in my arm and then you have to pat his butt. Works every time. He also will only sleep on his back here at home, but at the babysitter will only sleep on his stomach. Weird kid. 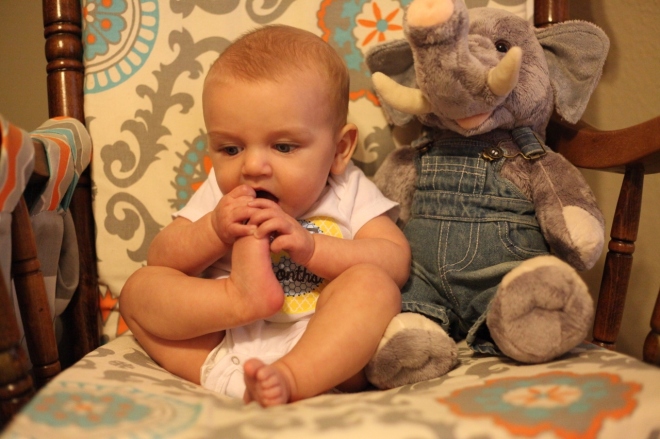 Likes: He has really started playing with his feet this month. (This picture was the first time I saw him try to put it in his mouth though.) George is constantly holding them and trying to pull off his socks. He has started splashing during bath time. I am not sure if he likes it because he is always startled by it, but he will keep doing it. He likes to grab the hair at the nape of my neck and pull it like it is a handle. I never have a full ponytail anymore. He has to either have his hands or a pacy in his mouth. He loves to talk now, so he loves hearing you babble to him. He likes to stand more than sitting. I swear he will stand on his own before he actually crawls. His legs are so strong. He likes when I babywear him, so if nothing else works to soothe him in the carrier he goes. He still loves holding our hands. He LOVES Larry the parrot on VocabuLARRY. He will be screaming, and then when the show comes on, he stops and smiles in amazement. 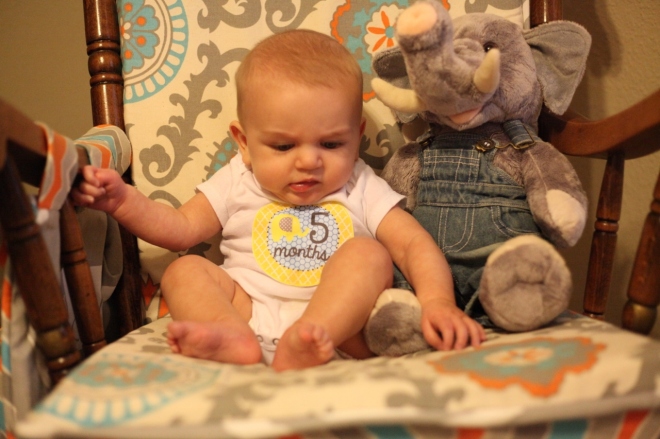 Dislikes: Not being able to see you. He is more aware of his surroundings now, and knows when you have left him alone. He hates to burp and for feeding time to end. It is quite comical for us, but he acts like he is being tortured. If there is not a nipple (of any variety) in his mouth he screams this horrific scream. So we have to have a pacy ready for after feeding so we can calm him down from the feeding being over. I am not sure if he doesn’t like diaper changes, but he doesn’t want to sit still during them. He tries doing back bends when we change his diaper, or he has to monkey hang on my arm. 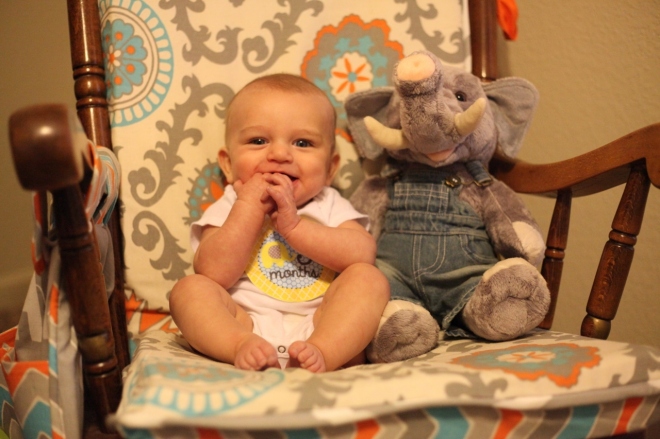 Milestones: We heard his first real laugh this month. He also rolled over for the first time. He looks like he wants to crawl; he pushes his butt up like an inchworm. He just doesn’t go anywhere forward, but he turns himself in circles. He can grab things now, but he doesn’t really know how to control it once he has it in his hands. He sort of can get his pacy back in his mouth if you count him chewing on the plastic part instead of the rubber part. He is trying to sit up. He looks like he is doing crunches trying to pull himself into a sitting position on his own. 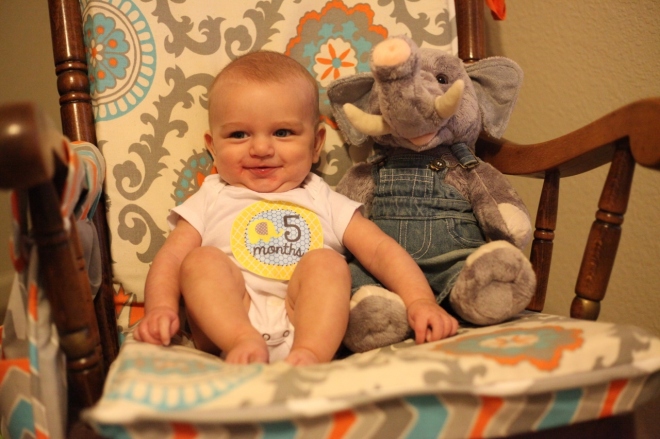 Quirks: He hums himself to sleep. It is so cute. He attacks his pacy like a lion going after his prey. He will still lay newborn style when he is laying on your stomach. Never too big I guess to snuggle up tight. 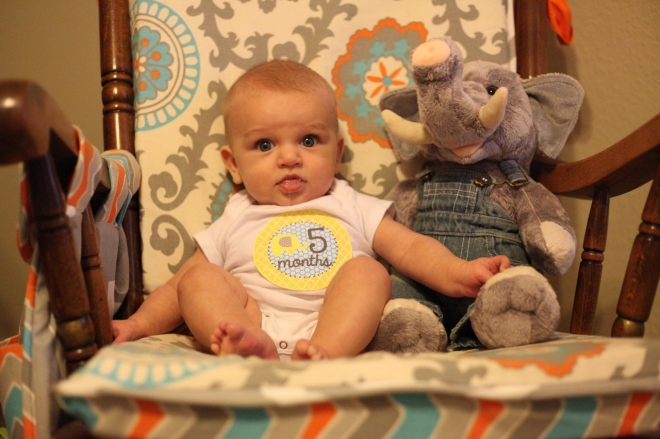 We parents are: still trying to figure out a good schedule. Things are good, but Tom’s schedule isn’t the same from week to week, so that makes it somewhat difficult to have things consistent. It has been nice to get back in the gym consistently. om was sick this last week, so that was a little rough pulling double duty so George wouldn’t catch whatever Tom had.

The dogs are: loving him more and more. George has started noticing them a lot more. He laughs at them now and reaches out to them. 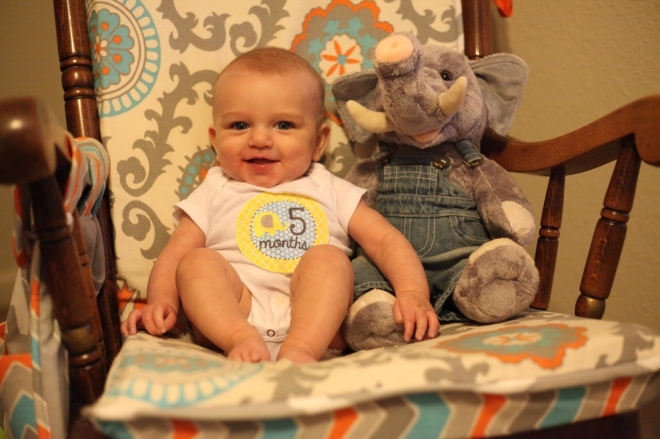