This month was a big month for little man!

Health:  He still looks like he is in pain sometimes when he goes number 2. Other than that though, he seems pretty healthy. He doesn’t have quite the issue with spit up any more. It happens a couple times a day, but it is usually small dribbles and mostly is only when I breastfeed him. He has his 4 month check up after the holidays so we will see what she has to say about him. We are seeing someone new, so hopefully we like our new pediatrician as much as our one in Clarksville.

Diet:  He has six feedings a day. Five of them are breastmilk, and the last one of the day is formula. As I described in my pumping experience, we had to add formula to the routine because I was not making enough breastmilk. Thank you for all the advice and support I have received over the past couple days. I have a few things I am going to try to hopefully increase my supply and my productivity at work from some of the wisdom shared with me. 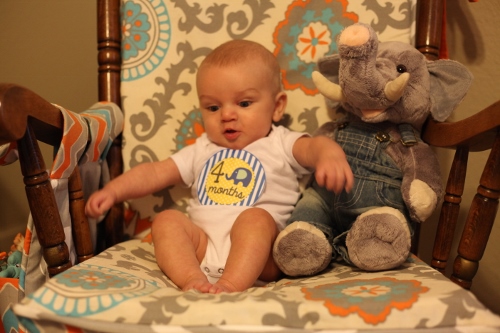 Clothes:  We are sitting pretty in the 3 month range. Some 0-3 month items are getting too snug and some 3 month stuff is too big. We are not even close to fitting in 3-6 month stuff.

Sleeping:  This has been all over the place. I usually read him a bed time story and rock him to droopy land. Then I put him in his crib where he generally falls asleep. Then about 15 minutes later he has lost his pacy, and he starts crying. Tom will then repeat the rocking and talking him to sleep. At this time for the most part, he falls asleep for the night. Occasionally, he doesn’t make it all through the night, and Tom will attend to him. (I will be honest that I haven’t heard him stir before 4:30 myself. I am in my own sleepyland.) There have been a couple nights where he ends up in bed with us or I fall asleep with him in the rocker because he just isn’t having the solo crib life. He does sleep a lot at the sitter’s, so I am not really sure if that is affecting his sleep at night or not. She tries waking him up but he puts on his cranky pants and refuses to stay up.

Likes: He LOVES his pacy, but this kid needs to learn to put it in his own mouth. We are always chasing that thing because he spits it across the room. You think I am exaggerating on the “across the room” bit, but sadly I am not. I think he thinks it is a game that we are playing. And seriously, someone please tell me where the Pacy Abyss is. We are always losing them… He loves talking with his Daddy. They are just too much cuteness together! We discovered the Baby First channel this past week. He watches a couple shows in the morning while Tom and I get ready. He will sit and coo back at the characters. It is so cute to hear his giggles and Oooos to the little animals on the screen. Our favorites are Tilly Knock Knock and VocabuLARRY. These are the two he responds to the most, which is perfect that they are right when I get ready. They are only 10-15 minute clips so they are perfect for that 20 minutes that I need to get ready for the day. And I then sing the songs for the remainder of the day…

Dislikes:  He hates being burped right now. He will shriek when we try to do this until we put the bottle back in his mouth or give him his pacy. He is getting better at tummy time. He can lift his head up like a cobra yoga pose. But after a minute or two of lifting, he is done and will let you know it. His tummy time is funny though because it seems like he is lifting his rear end up more than his head in a superman type fashion, like upside down leg lifts. 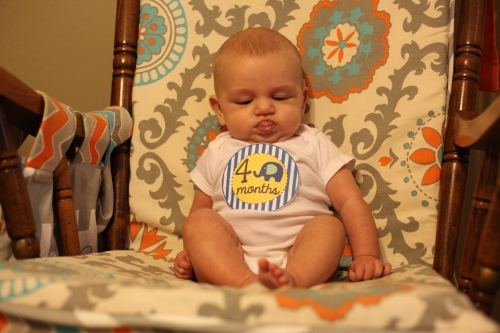 Milestones:  He can hold his head up on his own now, and he sits up pretty well if propped up. No more slouching here! He is really getting more chatty. Both Tom and I usually have a chat session with him a couple times a day. We also had to take him out of church a couple weeks ago because he decided it was a good time to test out his new sounds with his dad. He stays awake more in the car too and will coo at the music on the radio. He started doing raspberries and humming this last week. You can tell he is really learning how to use those chops more and more. He doesn’t really laugh yet; we get giggle chortles right now. I think a full on laugh is coming soon though. His smiles are really just the best. He smiles at me every night when he realizes it is me picking him up from the sitter. (I have to hold back tears of joy every day.) He met soooo many people this last month from his great-grandparents, to old friends, to people at work and church…he was Mr. Sociable this month. He also met Santa and was unimpressed. This may not be a milestone to others, but this is huge in our household:  We don’t cry anymore at lotion!!! My eardrums are being saved, and George is actually smiling now when I lather him up. We are fairly certain that he may be teething. He has been a little crankier than normal and is a hot drooly mess. 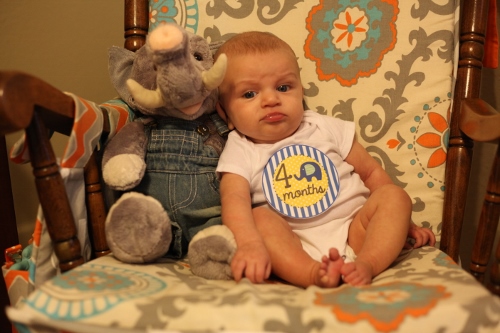 Quirks:  He smiles with his pacy on. Any pair of pants he wear (no matter how long they are) end up being short on him. He wants to be a summer baby all year round. He will stick his hand up your short sleeve when you are holding him and hold onto your shoulder.

We parents are: making it. This month was a rough one for the Whitener parents. We had a lot of stress on our plates, and well it was just a hard month for us. George was not the root of any of it just to be clear. Both Tom and I are routine people, and it has been a little awful without some continuity from day to day. And it is just a busy time in general with the holidays pulling us in a lot of different directions. Oh yea and we moved into a new house and both have new jobs. But we are bouncing back and getting more settled every day. I just need to let go of some of my control issues…Tom started his new job this week so it is so great to see him so pumped and excited again.

The dogs are: four this week! If you follow me on IG, you can see a lot more of their relationship with George blossoming. Grace is just in love with him, and she tries to shower him with kisses anytime she can. (Or she is trying to help clean up George drool.) George also reached out and pet Crosby for the first time the other day. I will just be over here melting away from all the cuteness. 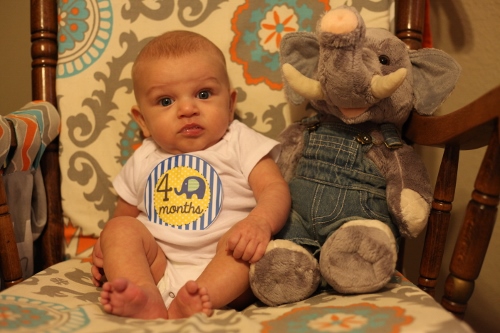