I was given access to this documentary as compensation for my review. All the thoughts are my own.

I was contacted by Passion River Films to take a look at a new documentary they have available.

“A Year in the Blue” is a film following a few cadets during their first year at the Air Force Academy in Colorado. 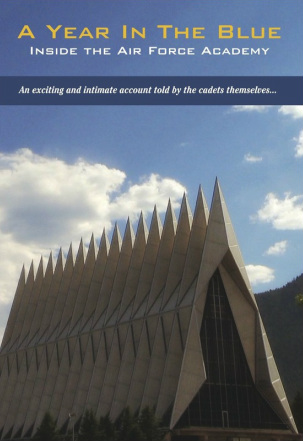 When I was told documentary, I was pretty much sold. When I saw that it was related to the military, I definitely knew I would find it interesting.

This film portrays the difficulties and triumphs of entering the Air Force Academy. It runs you briefly through the obstacles that each person must face to enter among the ranks in this particular branch.

They show you pieces of basic, when they choose their majors, how invested they are in their studies, and why being part of the Air Force is important to them. You witnessed struggles they faced as they were tested. You were able to experience the emotional toll that occurred throughout the process. You saw how pride and passion carried them through it all.

I liked being able to see glimpses of traditions at the school from the Ring Dance to the sporting events. I found this interesting to see on the film after hearing some of these events from my friend, Janelle’s, perspective of watching her husband go through these very things.

What I liked most about the film was the interview structure. They would show group interaction, but then they would interview individuals so you got to actually hear their emotions and see their reactions first hand. They also interviewed alumni, which I thought was a pretty neat way to show continuity and longevity of the lessons learned and the take away from the program. Most of you know that I love a good personal story!

Since most of my “military” experience is with the Army, I enjoyed learning more about the Air Force. They do things WAY different than the Army. I think what I found to be most intriguing about the film was being able to compare it to what I have seen in the Army and how vastly different the experiences are, but ultimately that these men and women are in it for the same reasons that Army folk are.

I really do appreciate all that our Armed Forces do, no matter what their training and experiences look like. Each branch has their own way of doing things, but they all give a lot of themselves and their families as a sacrifice to our nation.

I would highly recommend this film. It is an easy watch and gives you some great insight!

If you would like to view the film, it is now available for public viewing. There are a few ways you can get a hold of it. You can purchase the documentary on the public website at www.passionriver.com and various retail stores like Barnes and Noble, Amazon, or CD Universe.

Have you ever visited the Air Force Academy in Colorado?

4 thoughts on “Friday Filter: A Year in the Blue”