Welcome back to the third installment of our love story.

This chapter was not as blissful as our first year. It was two years full of challenge, heartbreak, and endurance. In the end our love did prevail, but there were a lot of hiccups along the way.

We had left the honeymoon phase.

Tom helped move me to Clemson in the summer of 2008. When he left that day in July, I don’t think either of us were ready for the two years of distance in front of us. 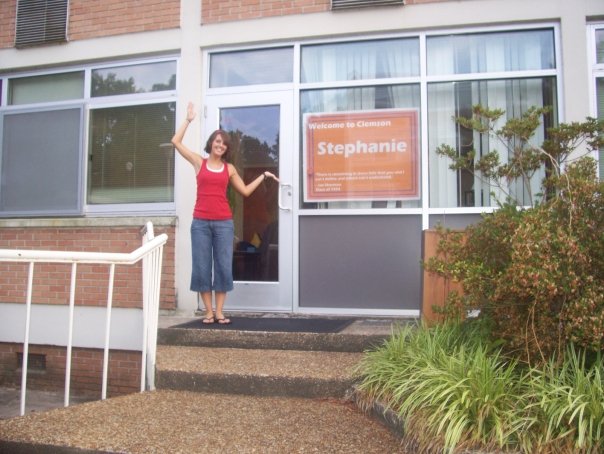 This was the door to my grad school apartment.

If you were not aware, South Carolina and Missouri are not exactly close to each other. (Also, if you were not aware of that fact, you may need to brush up on your geography.) It was a 16 hour drive between us, and traveling by plane was complicated since there was not a big airport near Clemson.

I also was starting a new job being a supervisor for RAs. When Tom and I met, I was not in any job that related to my field. This new job during grad school is kind of wonky to explain to outsiders what it all entails, which FYI is a lot more than just being a “Dorm Mother.” (My parents still don’t always understand what I am doing 10 years later.) It is something that is best understood when experiencing it in person.

So here I was starting a new chapter of my own life that Tom had no idea about.

At this same time, Tom decided to take another sabbatical from school due to his job going full time and extremely well for him.

The situation found us about 1000 miles away from each other embarking on new avenues in our jobs/lives without actually seeing it in person or really being a part of it. Long distance only make every day struggles more grandiose.

Yes, we would visit on 4 day weekends and holidays, but these visits were sporadic and not fully in touch with reality. Those who have been in long distance relationships know that those briefs moments you are together are spent soaking up alone time and are a break from your day to day existence. 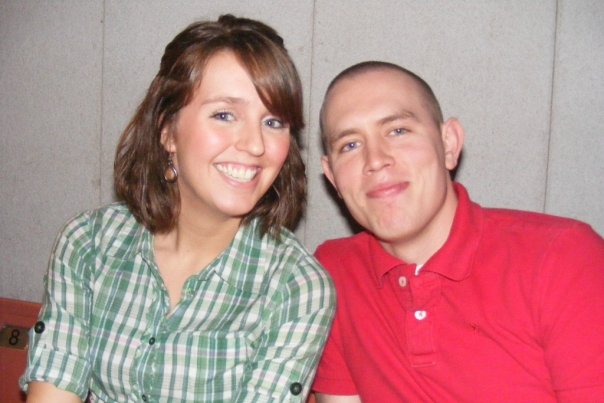 We talked every day and Skyped several times a week, but slowly our communication started breaking down because we weren’t sure how to be the best support for each other. We wanted to be there in person, but still had so much time apart.

That first year was a rollercoaster to say the least.

I was in my first year of figuring out what it means to be a Student Affairs professional along with the rigors of academia. And Tom was working full time and wondering what his life goals were.  It was at this time that Tom first talked about enlisting in the Army. My 23 year old self was not too keen on this idea. Although I tried being supportive, I guess you could say I didn’t have the heart for it. ( I would have never guessed that I would have agreed to this plan so many years later. Man I put up a fight then!)

To make matters more complicated, my degree program had a counseling focus. So we liked to talk about our feelings and had to do a lot of self-reflection. And of course after doing this for hours a day, it just kind of become a part of you to break everything down and put on your counseling hat even if it is for yourself.

Which only meant that I would over-analyze EVERY.SINGLE.conversation Tom and I would have about anything. And that first year we did have a lot of disagreements which I thought I could fix after having a few counseling classes. When I couldn’t fix our “issues,” I started doubting everything.

And that doubt just continued to eat at me, which is something I am not proud of to this day.

Summer of 2009 came and I was in Florida doing a summer internship. My heart was conflicted about our paths working together in the end. Here I was looking at the next year to start my full time job search, and Tom had just moved back to his home town because he was offered a job with the Sheriff’s department there.

Remember how my program was all about reflecting? Well I eventually reflected and self analyzed myself into breaking up with Tom. There was just a day that I felt that we were done. I just couldn’t see us working everything out and our long term goals ever matching up. I was focusing on what was in front of me and felt that I needed to look out for my own best interest. I decided we needed to break up. In my head, I thought we both needed time apart to figure out what/who we wanted.

The long distance had gotten to me. There were a lot of factors that played into this for me, which the blog is not exactly the place for me to delve into. Just know that I didn’t feel that I was strong enough to keep up this relationship, even though I was the one who had put us there.

I came back to Clemson after the summer internship in Florida in the fall of 2009. That fall my cohort and I prepared for our first job search and started making plans for our futures. At this time, Tom had transferred credits to a school in his home town and started working and going to school full time determined to finish his degree.

While thinking about where my future was headed, I had this nagging feeling that something was missing.

After some more reflecting, I said, “Self, you need to get Tom back.” So I started the long route of apologies and forgiveness back to our relationship. 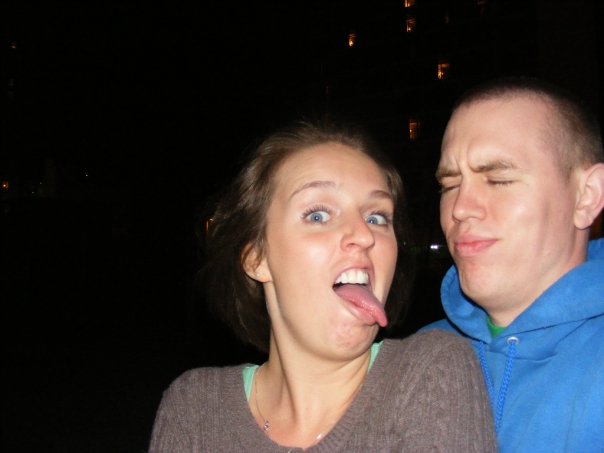 We spent about 5 months apart by the time we got back together, and it was right around the holidays of that year that we were back on track with everything.

We learned a lot about ourselves and who we were as a couple. We also started discovering where we wanted to go in the future. We eventually moved past me breaking off our relationship. (Although, while writing this, he razzed me the WHOLE time for leaving him.)

Jump forward to my last semester at grad school (spring 2010).

We were back in a good place. All of my reservations had been thwarted. I knew that we would eventually end up being married, but the answer of when was still up in the air.

We talked about where we wanted to end up and our plans as a future family. We came to the conclusion that we didn’t want to live outside of the mid-west. I would focus on Missouri schools, and some schools in states that touched Missouri. The original plan was to end up in Missouri, but unfortunately when I job searched this was also a time when many colleges had hiring freezes and budgets were locked. Many jobs I applied for at the time were only anticipated positions.

Every campus I interviewed with, Tom and I also did research on the community and the police openings in the area. We narrowed down my options so that they would fit both of our job needs.

About a month before I graduated from Clemson, I happily accepted a job at Iowa State University. One, it seriously was the best career option for me, but it also happened to seem like the best option and fit for Tom as well. Everything seemed to be lining up for us perfectly.

May came and I graduated. 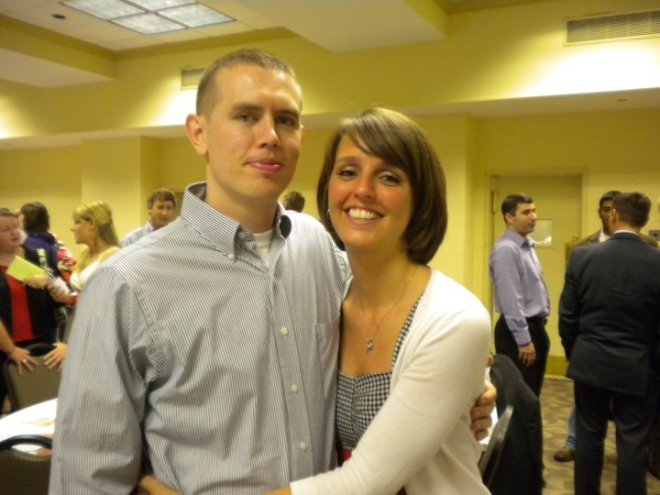 Grad school was challenging for our saga. There were some very painful moments. I was not as tough as I thought when it came to distance and crumbled when things got rough. The distance made it much easier for me to run away. It took a lot for me to crawl out of the dark place that I had put myself. Luckily, I had a great support network at the time who helped me process things and get me to a much better place. I did in fact need that break, as hard as it is to admit. I needed to work out some of my inner demons and needed to be truly alone to do so. I know it sounds silly, but I needed that time to be selfish to learn that I really needed to be selfless in a relationship. It gave me the opportunity to realize how much Tom needed to be a part of my life and what he meant to me.

Long distance is evil, and definitely not something I wish on any relationship. You have to have a lot of trust, strength, and confidence in who you are as a couple. You have to live as a single unit but also at the same time have the identity as a couple. Balancing between two worlds is complicated and messy at times. You have to find ways to keep on living in the present, but also be present for each other. There is compromise and lessons to be learned along the way. Long distance will change you; sometimes for the better and sometimes not, and sometimes both. It is by no means a fun situation to be in (let’s be real the only plus side is not having to shave your legs on a regular basis and getting to be the decider of what is on TV 100% of the time). But you realize that getting through the distance is what you have to do because not having that person in your life is worse.

Fortunately, Tom and I made it through and are better for it. We are much more effective communicators, and have a much greater understanding of each other and how to compromise having gone through that experience. It also taught me not to judge other people’s relationships and covet what they have. You never know what experiences got them to where they are. Most people are surprised to find out that we were separated for a time. Every relationship will have it’s hard times, but you possibly will only see the good times. Every relationship needs work and diligent maintenance. Some of us (hang my head in shame) regrettably take more time to learn this lesson.

I will say that we were both ready to be done with long distance at that time and could not have been more excited about the prospects of our life together in Iowa. We planned a trip a couple days after graduation to Savannah, GA to celebrate the ending of long distance and my completing grad school.

This is where this particular chapter ends my friends . At this point, we had been together for about 3 years.

Come back next week to see what happens as the move to Iowa looms ahead!

Wally is feeling 22.
I love the first day of school. There is something about the possibilities and the fresh start that gets me every year. These two walked in so ready to start, and I could not be more proud of them.