While I know there were almost 3 years I survived before him, I cannot remember my life without him.

Being only three years apart, Randall was around for most of my life. 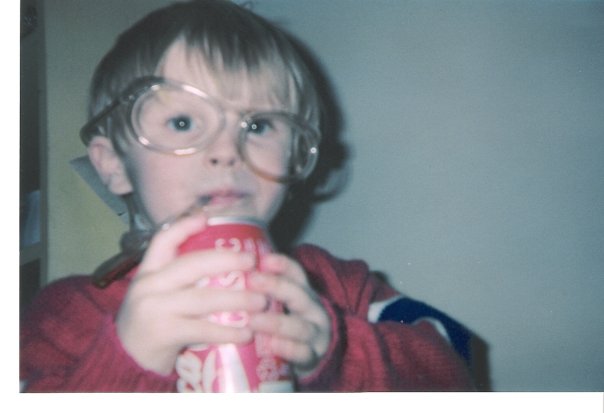 We definitely had our troubles as brother and sister. There were many years that I loathed him. Especially those days that he would steal my things or he would beat me at Chinese Checkers. I thought he was a pest for a time there. On many occasions I wondered how we were even related…

Oh yes. This is how.

I honestly didn’t find many pictures that we didn’t have a funny face. The left-hand corner is the most normal picture I could find.

Although we had our ups and downs in our relationship, we managed to be there when the other needed it. With nothing really consistent in our childhood, we were the only thing that remained constant for each other. We shuffled each week together from house to house. Rarely did we go somewhere without the other.

We have been there for every major life event. Granted I didn’t exactly see his daughter be born, and he didn’t see my first walking steps, but you get what I mean.

Our dad took us on an impromptu fishing trip. So naturally since we didn’t have swimming suits my brother and I dived in fully clothed.
This is one of my favorite childhood memories.
I think I was around 8, which would make my brother 5.

I wasn’t always the nicest sister. Once, I convinced him to give himself a swirly for a quarter, and to this day I still owe him that quarter. Somewhere I have a picture of this…

Randall wasn’t always the nicest brother. On numerous occasions we found ourselves in screaming matches with slamming door action.

We managed to pull each other up and make each other smile when it counted. We were often the only kids at family and social events, so we had to find ways to entertain each other. And so maybe every day wasn’t great, but most days we fueled each other’s imagination with play school, games, and legos. 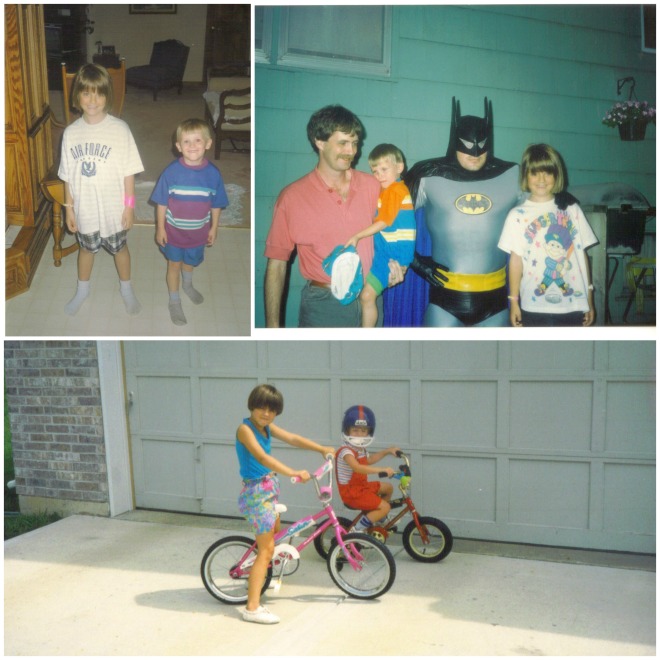 Randall was terrified of Batman, who is actually being played by a close family friend of ours. He cried for the longest time.
(Also check out my troll shirt!)

We would pretend that we were Michael Jordan and Muggsy Bogues for hours in the driveway. Even when we played tennis or baseball in the back field, we still were Michael and Muggsy, we felt empowered by them I guess. We accidently broke things in the house from playing too hard. Like the time we played volleyball in the house and it broke a window. Or the time that we were playing circus, and I was the ring leader standing on a flipped over trashcan, and then proceeded to fall through the wicker trashcan. We would dance for hours to Space Jam music, and secretly wish we could be part of the Mighty Ducks team. We watched countless hours of Saturday morning cartoons, which oddly enough Cowboys of Moo Mesa is one of the shows the 90s forgot.  All the times that we would sneak into the loft to watch Dad’s TV long after our bedtimes. We had our own band for awhile, me on keyboard and Randall on drums. We would record ourselves on our sweet tape decks, but the recordings I really want to get my hands on are all the news reports we made.

We would play ourselves to sleep.

I was always envious of my brother. He is so smart. He always had/still has better math skills than I do. It used to frustrate me so much when I was working on my time tables quizzes, and he could run laps around me with how fast he would say them before I could even comprehend the problem. He was one of those kids that never had to study but could still ace the test.

Who doesn’t love Easter best? And aren’t his saddle shoes the cutest thing?

He was never scared to do anything. He had bravery like a superhero and had fear for nothing. (Maybe it is from all those times he ran into walls when he was in preschool.) Randall never seemed to care what people thought about him, and lived full out and full on. He could strike up a conversation so easily, and you clearly knew where you stood with him. Even though he was younger, he often stood by me so I could be stronger and less shy. Seriously, he would have to escort me to go get ketchup packets…

We were only in the same school for two school years:  my fifth grade/his 2nd grade and for my senior year/his freshmen year. (Our kindergarten and first grade were in a separate building in case you were wondering.) We were in high school band together which was such a neat experience for me in my last year, but maybe not so much for him in his first. We also worked at Worlds of Fun for a couple years together, and it was the start of both of us becoming adults.

So even though a lot of things have changed over the years like our hairstyles and our names (seriously you go by Paul now?), you have always been my bubba.

He was such a cute kid! Now he has a kid of his own, and she is just as cute!

So Randall, here’s to you on your day of birth.

26 years ago, our lives changed. 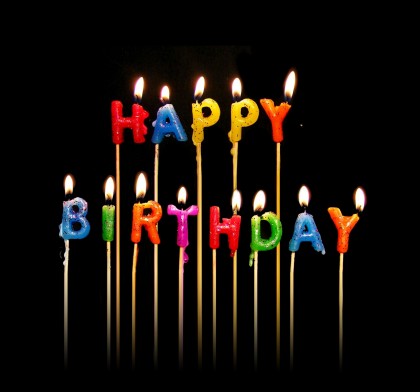