So have you seen Dogshamming?

I have been waiting for the opportunity to put my own dogs on the site.

And my opportunity arose this last weekend, AND I FORGOT TO MAKE A SHAMMING PICTURE!

Ok in reality, I was so embarrassed at what my dogs did, I just tried cleaning up the evidence as soon as possible that dog shamming was the last thing on my mind.

I know you all are drooling to see what they did, but let me preface the picture with the back story.

Grace has severe separation anxiety. It was one big reason we decided to get another dog. She could have a companion and not worry so much about abandonment.

We have never been able to leave her out of the kennel, because she literally makes her self sick and makes a mess of herself and the house. It is so bad that she even does this IN her kennel sometimes.

Crosby on a few occasions has escaped out of his kennel, and he was a perfect angel. The couple times he has gotten out by himself, nothing happened.

So we made the plunge to try both of them out of the kennel.

Much to my chagrin, they have done fairly well. For the past month, we have successfully left them out every day.

We have had only two messes.

1. Grace made a boom boom when we tried to push the time limit we usually set for ourselves to get home. But plus side, she did not eat it and proceed to vomit poop, and then poop vomit. (Too much?) We are about progress people.

2. They ripped apart a pizza box that we had left on top of our microwave.

So we were pretty proud parents, and we would brag about our little success muffins whenever we could!

That is until this weekend, when they ate my sister-in-law’s couch. 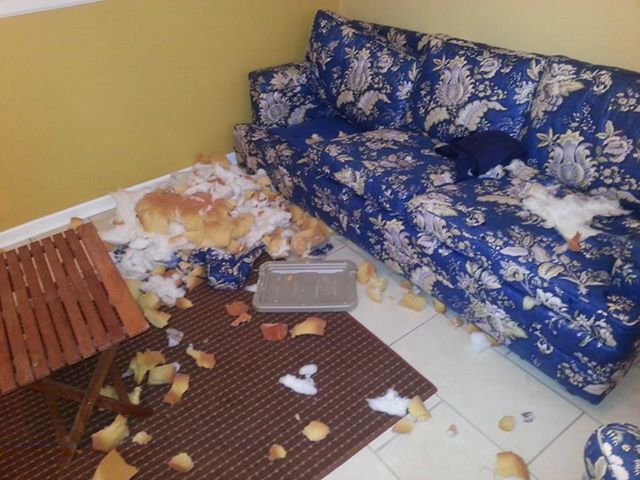 What this picture doesn’t show is all the pee that Crosby sprayed all over pretty much the entire perimeter of the room, and the poop that inevitably came from Grace.

So we have learned that if it is not our house, they cannot be out of the kennels.

I am just now able to laugh at it. So embarrassing…

Oh,you think that is all that I have.

Nope, you are so naive.

Since we have gotten Crosby, I have lost count of how many collars he has chewed through…of Grace’s. He doesn’t like her wearing anything apparently. 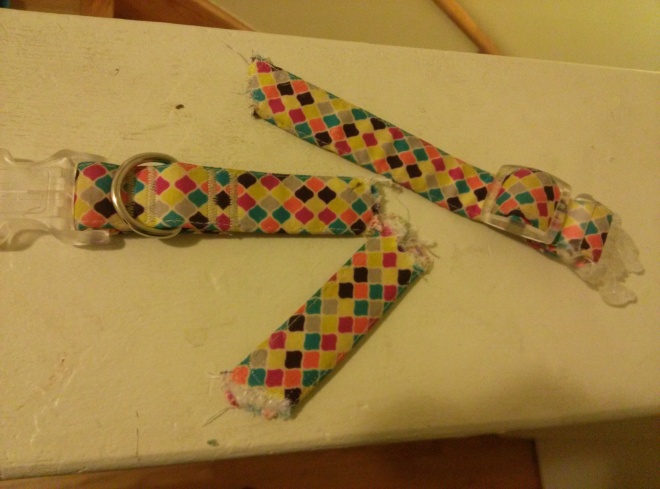 Is it bad that I seriously almost cried when I learned that he chewed through this one? We had just put it on her last week, and it was my favorite collar I have ever bought her. Now he wins; she is naked unless we are in public.

For the most part, our life is not this dramatic.

We have a lot of “always positive” moments, instead of “bad turned eventually funny” moments.

Like this weekend when we introduced them to a trampoline.

Needless to say, we will not be an internet sensation anytime soon. Grace is the biggest scaredy cat. This is exactly how she acted with water, and this is fairly accurate on how Crosby was with water-not a care in the world.

Something they are really good at is road trips, so that is a plus!

We may puke in our kennels, but not in the car!

Grace likes to climb up in the front seat with me like she is a lap dog. Then she will look back at Crosby in an obnoxious way like she is snubbing him. She is also afraid of the air vents, which is a fun game to play. Doesn’t her collar look nice?

This is Crosby’s contribution to keep everyone awake and alert in the car.

So there is the doggy shame for us. I know this won’t be the last thing they do, so hopefully next time I can have some forethought and document it properly.

A lot of people have been asking how Grace and Crosby are adjusting to each other. They are now inseparable best friends. 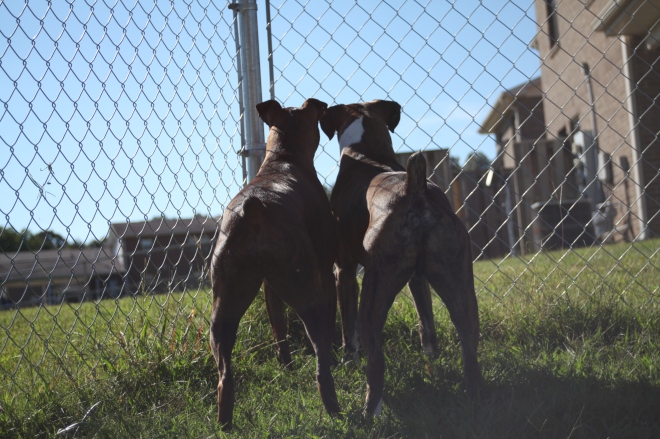 We have really lucked out that both dogs have been pretty easy. They seem to really like each other. We have had a few minor issues with Grace adjusting. She is a little jealous, but we can honestly say that she has been doing better when we are gone since she has a pal now. Thank the Lord there is hardly any poop vomit anymore to deal with. Her separation anxiety is really being subsided by Crosby! She is just having anxiety now when we are home…

This is Grace playing her version of catch. She just pounces and then leaves it there.

They keep each other occupied for the most part. They have had a few little fights, but only one time did we have to intervene because we thought it would go bad. Tom brought out a voice that surprised both of us and the dogs. Grace is kind of a diva and starts most of them, but that makes sense since she was here first. 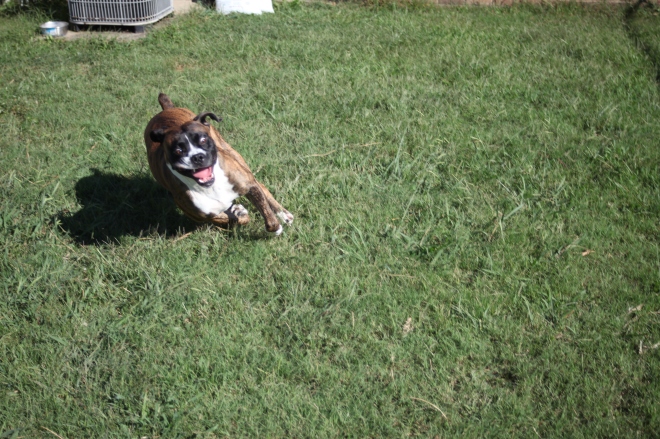 I love when you can get shots like these two. 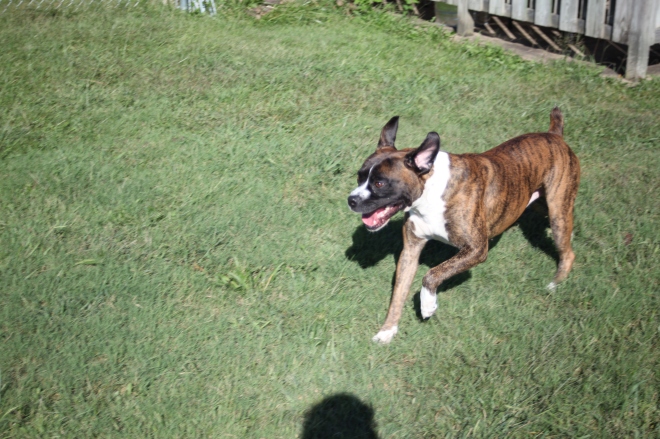 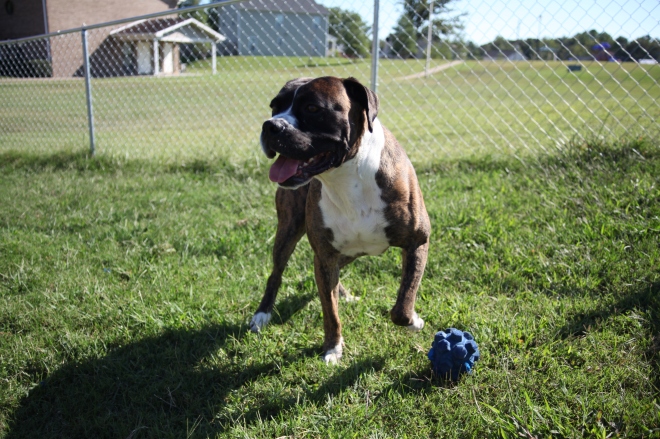 He is a pretty cool dog. He loves standing at this corner. He would lay there all day if we (and Grace) let him. 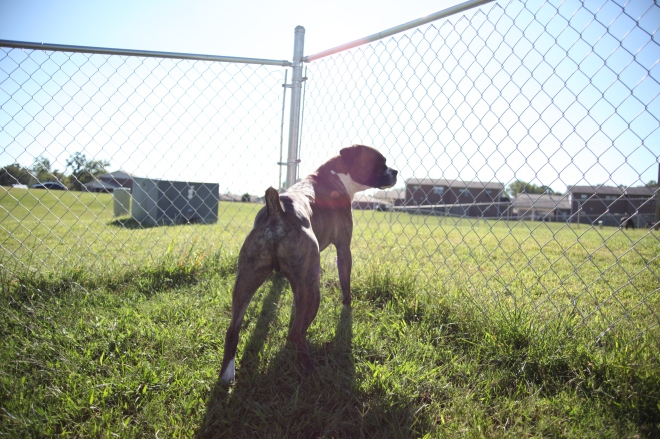 They do a really good job taking turns eating. It is really adorable. I am not exaggerating that they will literally take turns and line up behind one another to eat and take mouthfuls to the rugs so the other one can get their share. 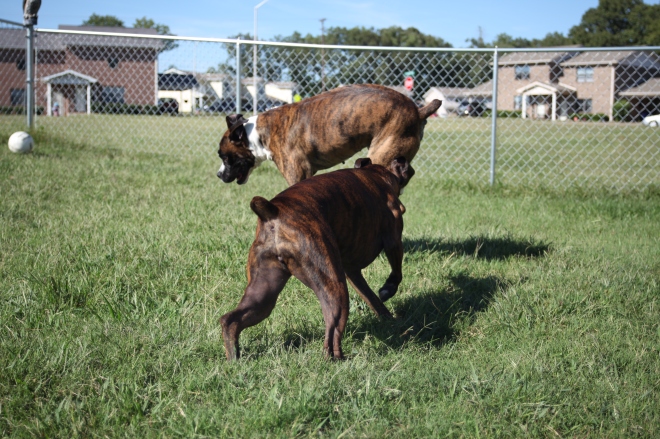 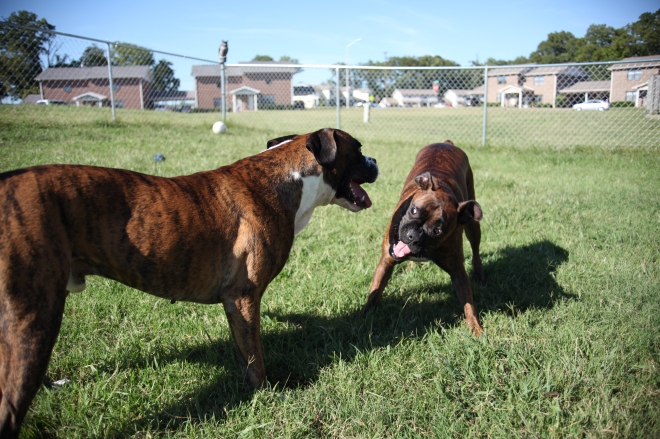 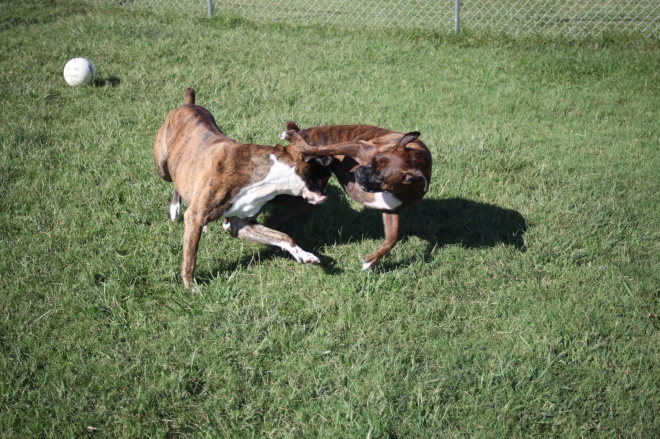 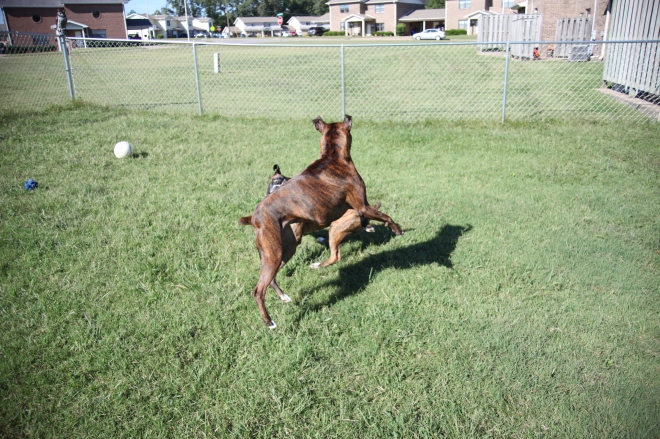 They have started playing tag with each other in the back yard. Grace is faster than Crosby, but she never actually picks up the ball. So he gets it every time and then they will chase each other around as Crosby throws it up in the air like he is playing monkey in the middle with her. One of these days I will get a good video of it. 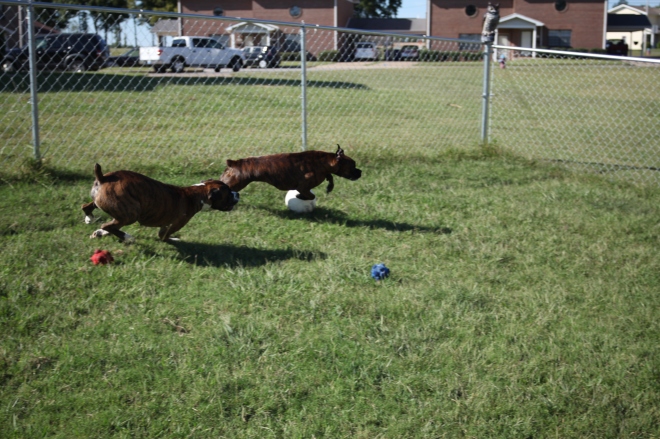 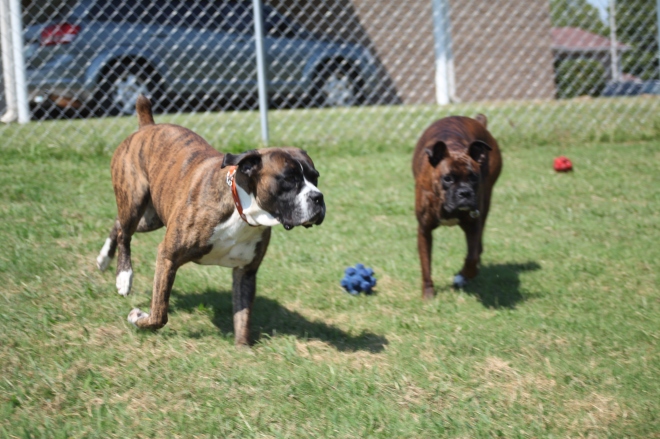 They even share toys well. They usually end up chewing on the toy together. There is a bone there if you look under Grace’s chin that they are both chewing. 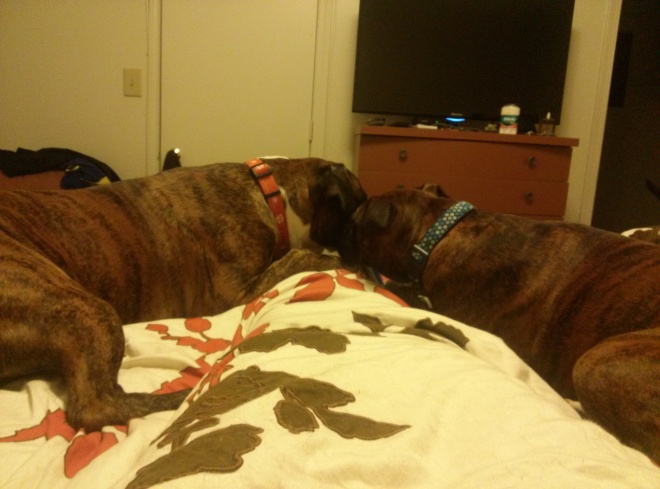 Seriously, we have the best dogs.

I have underestimated how big Crosby is though. He has a good 15/20 pounds on Grace. Yesterday I was playing around with them. Crosby attempted to give me hug, and I wasn’t ready for it and accidentally fell into our curtains in the second bedroom…pulling them down off the wall. Then he just slathered me with kisses as I laid there laughing.

We have figured out the sleeping arrangements now so that has been better for all of us. Although the next couple nights will be glorious with a little extra room while Tom is at field training. Some times long distance has its plus sides. Usually, Tom and I end up with no blankets and on our respective edges while both dogs snuggle each other in the middle of the bed with scads of extra room for stretching. Or we will make an obstacle course for them to the bed so we can get to sleep before they do and have our own snuggle time. It has become a production to go to bed in our house. And we are getting used to the snore machine.

Every day is a new day with things we have to figure out. I would say that the transition is a success, and we couldn’t be more happy right now with our little family! 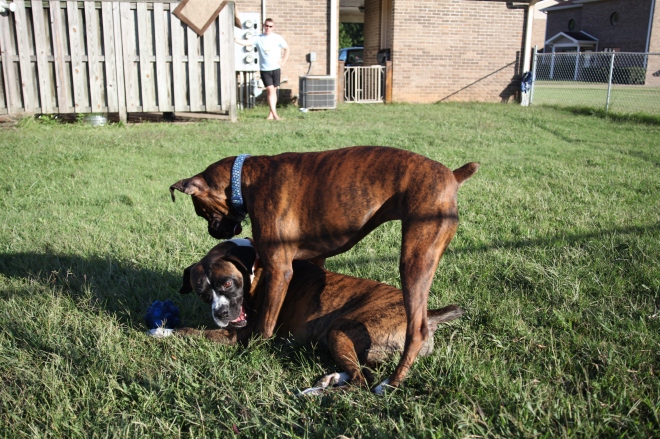 Grace is trying to show Crosby that she has all the power. 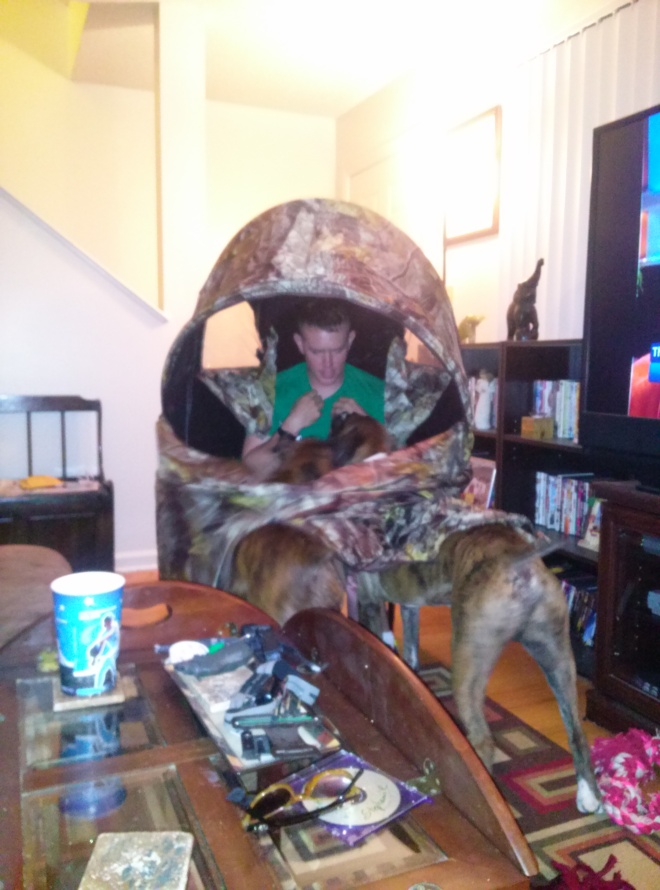 Tom is testing out all of his hunting gear, and the kids wanted to be involved. 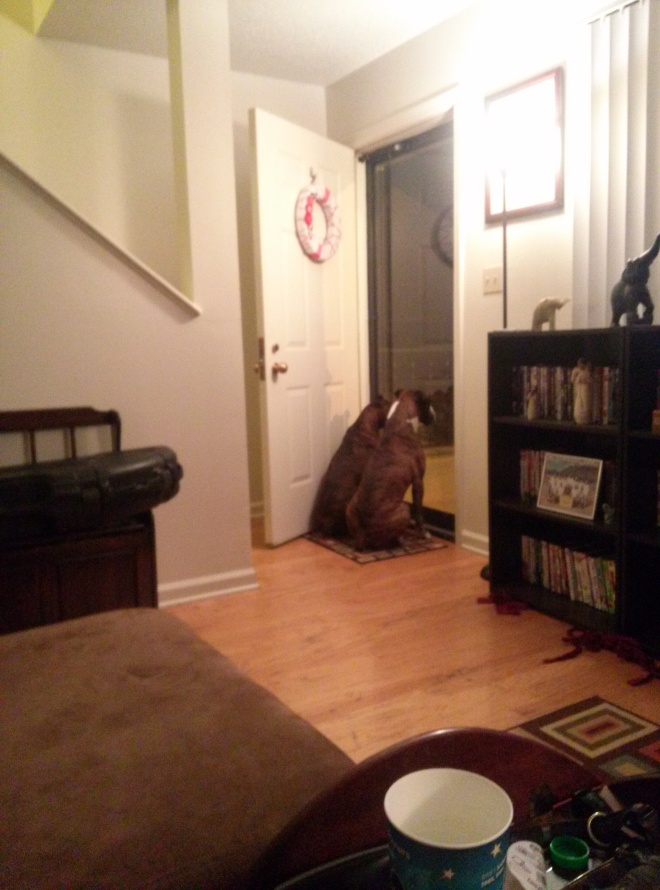 They are so much fun, and I love moments like this that they are side by side…and still.

We will be traveling for the first time with them in a few weeks. That will be the true test of how the transition is going.

Hope to see you all back for the fall craft on Thursday!

This boy right here worked so hard through first grade. There were challenges of course. We learned how to navigate his learning space and create the best environment for him. The amount of effort he has put in to learn and adapt has been tremendous. His teacher was the best at providing feedback and patience as he figured out new skills, and also with us as parents. But despite all the growing academically, I am most proud of how good of a friend he has been. Any teacher we met with talked about his joy and how kind he was. So he may be the squirreliest kid we know, but man he can tug at your heart strings. Probably by talking your ear off since he has a story for everything! Happy last day of first grade buddy! Second grade here we come!
It's all about Daphne recently! So proud of our girl who is ready for kindergarten!