George is 20 months old today. We are only four short months away from not telling his age in months. It was really hard to do this update, because I know I am missing things or I put too much in areas. I want to remember every detail, but he is changing and growing so quickly it is hard to keep up just like his hair!

Weight: 28 lbs. I get a workout every time I lift him.

Health:  The last two months have been a roller coaster of a time with his health. We spent a week in the PICU in the beginning of March. Last week we had to go to Urgent Care because he was having a hard time breathing again, and we found that he has a double ear infection. We go back in a couple weeks to see if tubes are going to be necessary. My mom thinks that he is teething after seeing him at Easter. The only ones left are the back 2 year molars, so yippee.

Diet: He is still big on meats and carbs. He loves raisins, clementines, yogurt, and chicken nuggets. He is sitting at the table with just a booster seat now, and his utensil usage is getting really good. There are a few things I still don’t trust him with, and they are saved for the nights we do a bath. We started making him smoothies every day to get his veggies in. He loves spinach and blueberry smoothies, but wont eat either when it’s not in a smoothie. I bought these which saves us so much money with not buying as many pre-made packets, and they work great for these smoothies. He pretty much eats mostly what we eat, besides the veggies. 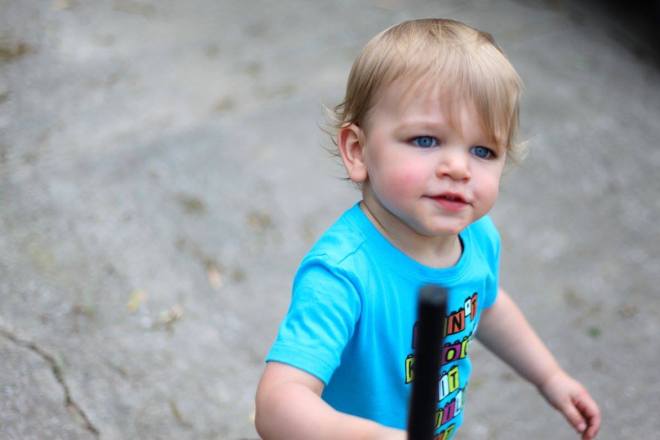 Clothes:  18 month clothes are mostly too small, so he is swimming in 2T clothes since we can’t find many 18-24 month items. Little boys in shorts has got to be the cutest thing. He is still in size 5 diapers, and moved to a size 6 shoe. 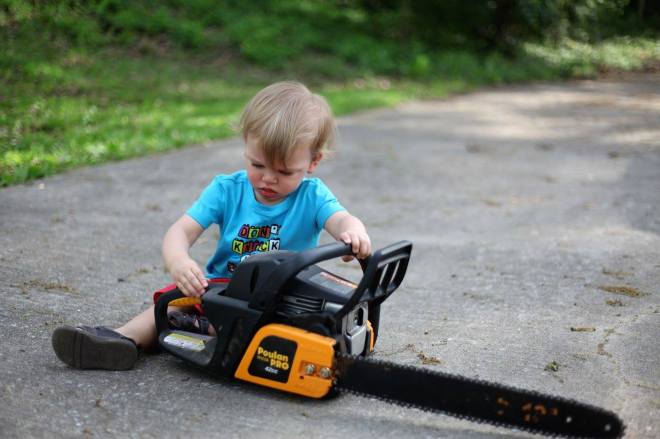 Sleeping:  He sleeps at night from 8pm-about 6:30 am. He sleeps through the night pretty regularly still. He goes down really easy at night, but naps are a different story. He fights naps and will scream and play instead of taking the nap. He eventually wears himself out and konks out. Once he does take a nap, he usually sleeps for 2-3 hours. 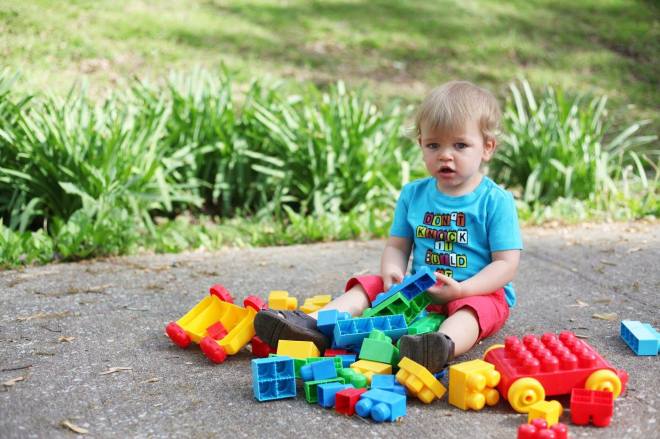 Likes: He loves to explore. He is so very curious. Of course he wants to be everywhere he isn’t supposed to be. He is obsessed with legos and anything with wheels. He loves dancing. The kid bops around anytime music is on. He loves to sing to worship music. We have music on A LOT around George, but he seems to sing only when we are in church or when I have K-Love on. No joke. (He also likes to talk all through church…) He is OBSESSED with being outside and going to his daddy’s workshop. He loves exploring all the tools Tom has (like the broken chainsaw here). He still loves to play with scarves and play dress up with them. He loves climbing, and his current favorite spot is in the middle of the kitchen table. I am honestly surprised he hasn’t climbed out of his crib yet. We are holding on to that as long as we can! (Although at the sitter’s, he did climb into his crib then freaked out when he couldn’t get back out.) 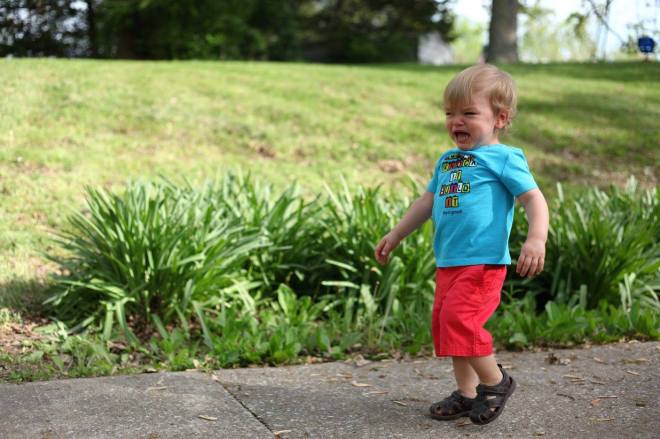 Dislikes: He hates mornings right now. He throws the largest tantrums when he gets up because he is hungry. He is not happy when we tell him no and try to keep him from doing dangerous things. He is a sassy pants when he doesn’t get to do what he wants right then. He isn’t a fan of the lawn mower. He still isn’t a fan of veggies unless it is in the smoothie state. He does not like to sit still for photos anymore. He is always busy and on to the next thing. 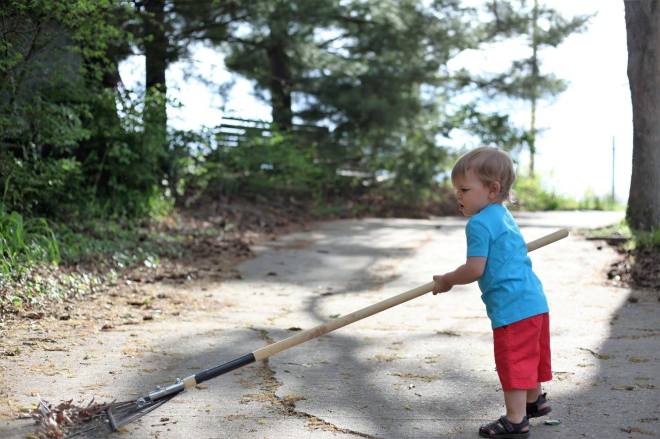 Milestones: Gosh he talks a lot. Most of it is unrecognizable, but he is a chatty little guy. His new words are ugh oh, more, bye bye, and baby (babee). Others have heard him say thanks and George, but Tom and I haven’t been so lucky to hear those. He does sign “more”, but I also think that he believes it also means please. We have had to re-do operation-take away-pacy due to the hospital stay, but I think we are on our way out. He gets it maybe once a week now when he is having a really hard time and neither of us have the patience to deal with the tantrum. George is so smart. He is really good with spatial awareness. It is insane what he is able to do with stacking and putting things into tiny holes. He is really into the concepts of how things fit together and the mechanics of it all. He knows how to detach/reattach things and how to turn things on. His brain is just on fire right now with absorbing information and then putting it into practice. He can walk from the door to the car now without me having to hold him. He even knows which door is his door. He cleans up his own messes now. It is ridiculously cute to see him dab his face to get it clean. Big milestone: we started potty training this past weekend! We weren’t really going to push this until he turned 2, but he has been telling us when he needs to pee for the past couple weeks. So we figured we could at least try and see what happens. He has gone pee twice in the actual potty since we started two days ago. I never thought I would be so excited about bodily functions! Hopefully it means the less I will have to deal with said bodily functions down the road.

Quirks: My favorite quirk of his is that when you ask for a kiss he gives you his forehead for you to kiss. It is so stinking cute. He points to the things that he wants in a staccato manner. When he hugs he has to put his arms under your arm pits. He really does want to help you do things, so this is generally how I get him out of tantrums. Giving him a “project” to do makes him feel independent and usually stops him from crying. He loves to help carry his bag (aka drag it), put away dishes, put away toys, and load laundry into the machines and turn on those machines. When he is done with his food plates/cups, he runs and throws them in the sink like he is doing a slam dunk. This weekend we were building borders around our trees, and he would pick up rocks and put them (sort of) into place. I hope that he always wants to be a helper. He is very silly, and his personality is starting to shine as a big goof. He loves to make us and himself laugh. If he doesn’t feel like he is getting your attention, he will climb in your lap and bear hug you around the neck. I love it. 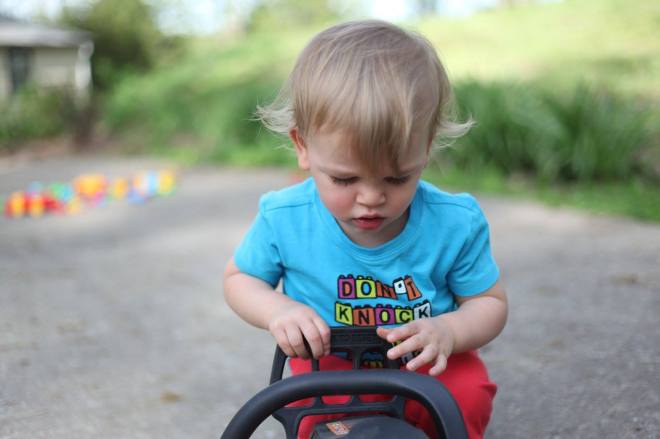 We parents are:  doing really good. We just got out of the worst shift so we are getting a lot more time as a family. We feel like we are finally in a good groove as a family unit. We have been working on the yard a lot lately which makes us really happy to see things coming together the way that we want. Plus it’s always nice to get outside for a little bit every day. 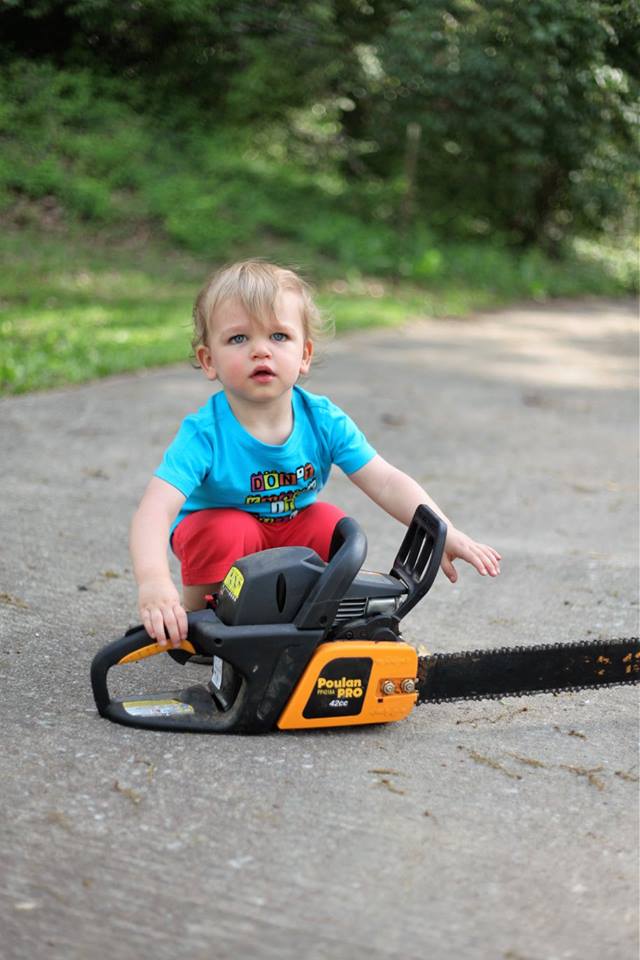 The dogs are: loving this weather. Crosby is basically an outside dog now. He goes out when we wake up and doesn’t come back in really until we go to sleep. Grace likes the comfort of the couch a little too much to give it up all day. They love George, and they are so good with him. They let him beat them up since he is very aggressive with his petting,  and he tries to ride them. George tries to give them their food and hands them their toys in all fairness.

I want to remember this hair. Some days I think we are ready for a cut. Other days I just love every thing about its messiness.

I just love this little munchkin so much! I can’t wait to see what the next couple months bring with summer!

I love the first day of school. There is something about the possibilities and the fresh start that gets me every year. These two walked in so ready to start, and I could not be more proud of them.
August is like the Sunday of summer.