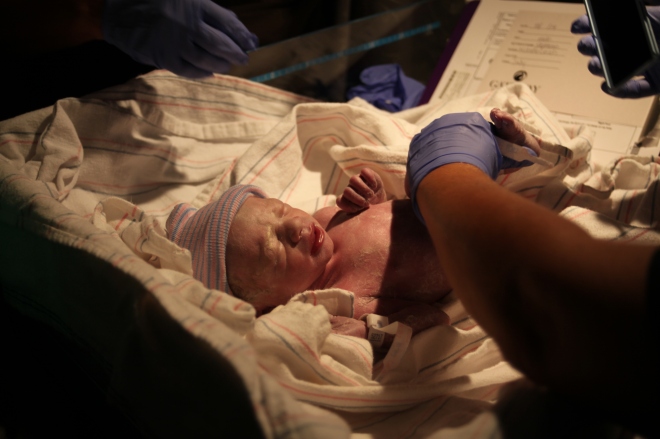 I left off with George coming out of my belly at 5:17 pm.

Our hospital has a rooming in policy, and they are very big on giving the families as much time together. They first will check all his vitals and they have a few tests that the baby has to pass before leaving us with him for an hour.

Because I was on magnesium for about 19 hours, George took on some of the drug too. My side effects were to feel like death, so you can imagine the toll it took on George’s little 5 lb 14 oz body. The mag made him super sleepy and sluggish so he did not pass some of the breathing tests and reflex test.

So I was able to hold George for about 2 minutes before they took him to the nursery to get a closer look at him. Even then, he was swaddled in so many blankets all I got to experience was his bluish gray face, no counting toes or seeing those knobby knees. Tom did not get a chance at all to hold our little man at this point.

Not exactly how we imagined this to go.

I am not sure how much time had passed, I was high as a kite with the mag drip still coursing through my veins. It could not have been very long before the nursery nurse practitioner and attending doctor came to our room to let us know that they took George to the NICU to put him on oxygen.

He was not able to breath on his own. Those last few weeks are time for babies to fully develop their lung and intestines. So in addition to not being able to breath, he was also put on an IV because he could not feed on his own.

He was on the oxygen for 3 days, and the IV for two days.

Feeding George went from the having an IV, feeding him drops of breastmilk from a syringe, breastmilk in a bottle and increasing mL he took with each feeding, to finally testing the breastfeeding waters 5 days after he was born.

While in the NICU, they also did heart scans on him because he had a murmur at first. He had some holes, but they all turned out to be normal holes that all babies have due to being hooked up to an umbilical cord for 9 months.  I wasn’t aware that the heart isn’t fully developed at birth, and that murmurs are pretty common in newborns. The second heart scan gave us some positive news that these holes were closing on their own like they should. We do have to do a two month follow up with a heart specialist in Nashville just to make sure he is still progressing.

He also has jaundice and had to be put on photo-therapy until the day before he left. He still has high billy levels so we are taking a few minutes outside each day to hopefully get that down on his own. They also say the more he eats the more he will work it out of his system. We are having to go back in every couple days to get his levels checked to make sure he doesn’t have to go back to the hospital for even more photo-therapy. We are trying to kick the jaundice like a bad habit.

But hey we got to see him rock these shades. 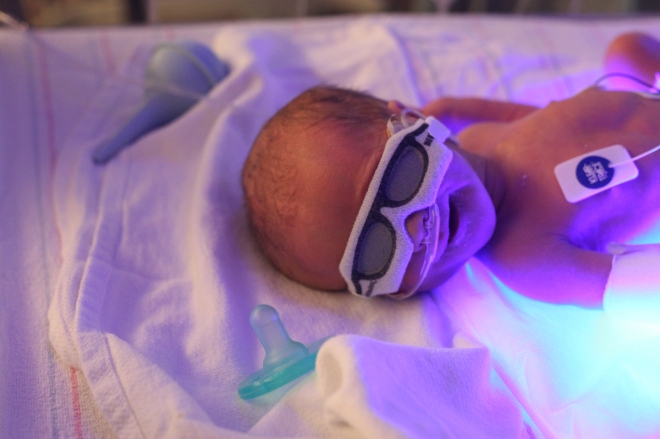 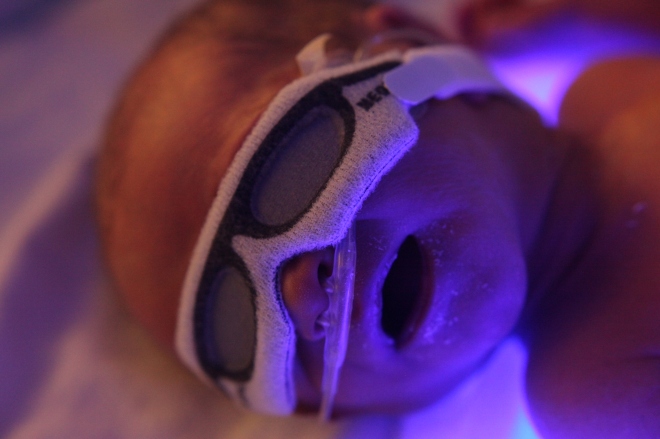 So that was the prognosis of why he was in the NICU.

That was all technical, but there are so many emotions that no one prepares you for when you have a NICU baby.

You always think that it wont happen to you, and that you will get to take home your little one soon after the birth. Yea you hear the stories and read the articles trying to get you to think about the possibilities. However, I think most of us choose to be optimistic and brush the forewarning aside.

Even if you do think about the what ifs, you are never ready for the shock of the news that your baby had to go to intensive care. That reality cannot be explained.

You cannot prepare for the feelings of being helpless as you see him being strapped to monitors and watch him cry as he is poked and prodded.

I was so overwhelmed the first time I saw him 28 hours after he was born. Overwhelmed with worry that something else could go wrong, but happiness that he is alive. 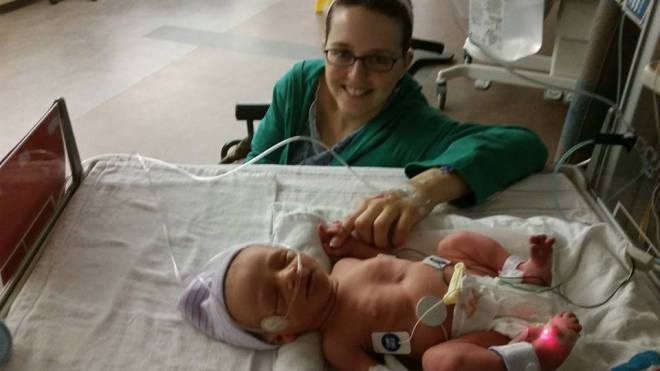 You never think this is how you will spend time with your newborn.

You are disappointed that you can’t snuggle him close.

You are heartbroken that he has all of these gadgets attached to him. 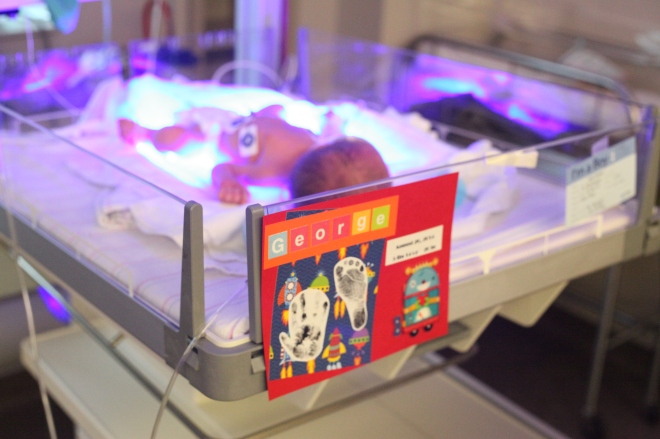 You are taken over from anxiety that every knock on your door or phone call will be someone telling you even more bad news. So sleep isn’t really happening because each time I closed my eyes I feared the worst.

You are just scared.

I think you would expect those emotions to come but maybe not the depth of them and how paralyzing they can be at times.

The one that I was not expecting was the guilt.

Seeing that it was my blood pressure that caused George’s 3 week early entrance to the world, I felt like it was all my fault. I felt responsible for not being able to carry him full term so his lungs could develop. I hated myself and my body for not passing my first test as a mom. I felt like I had failed him. Why couldn’t I just get my blood pressure down for just a couple more weeks?

Maybe it was the delusional side effects of the mag drip, but I was so distraught that I was to blame that I would cry at the drop of a hat. 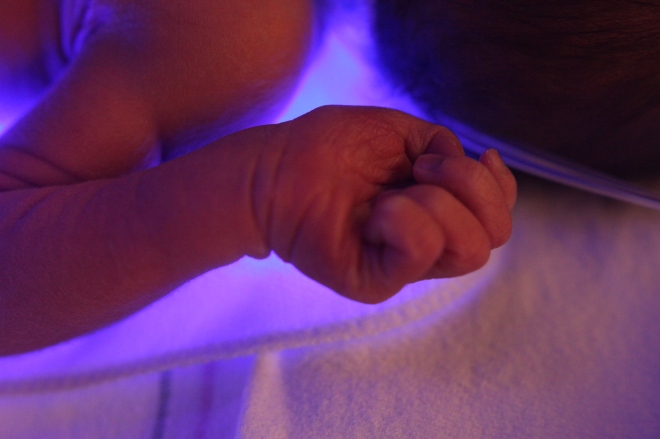 When you have a baby in the NICU, you also have to consider balancing your time. While we could go to the NICU any time we wanted minus the 3 hours they were closed due to staff changes, we needed to take time to take care of ourselves. Having a NICU baby is both physically and emotionally demanding. (not to mention having a baby period is physically and emotionally demanding) I would have stayed in there the whole time if I could, but I had family remind me that I needed to eat and sleep-you know basic functions of life. Once we left the hospital and weren’t just down the hall we had to keep in mind the time it takes to get to and from the hospital and how to break up the day to make the most of the drives. But all the while when you don’t go see him you think, “Are we being bad parents because we aren’t at his side every second?” How does he know that we love him if he can’t see us constantly?

Eventually you work through all these emotions, and a lot of it goes away for those moments where you get to hold his hand and you see his improvements each day. You start focusing on the positives and push aside the ugly emotions so you can celebrate the small (yet huge) strides towards being free of the NICU.

Holding George sans tubing for the first time was possible one of the best moments of my life. This happened three days after he was born. 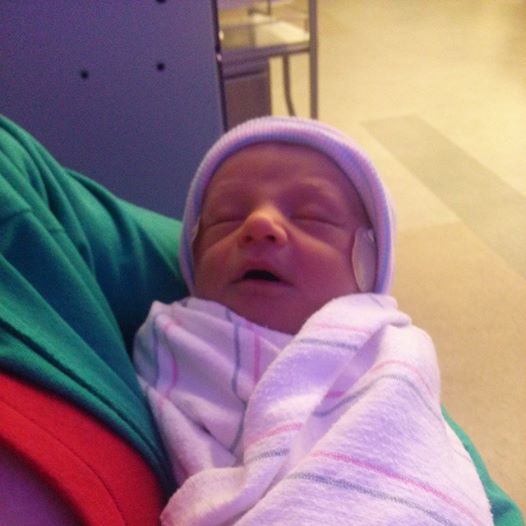 You realize that while the experience is difficult, it is a blessing to have the NICU staff taking care of your little one. He is getting 24 hour attention and being observed by professionals to encourage his growth. I would love to be the one giving him that attention, but let’s be honest I have no idea what I am doing so it was comforting to be able to chat with medical professionals every day on how to do things. Knowing they were taking ever precaution was comforting that we would have a healthy baby soon. We were able to ask all kinds of questions related to parenthood and how to be the best for George. It was like a gradual and practical introduction to taking care of our baby. It was very reassuring to have that help and guidance. Gotta look at the positives.

I was also able to get a lot of assistance and hands on help with breastfeeding which we would not have had outside of the NICU. Granted, we are still working on that because he still isn’t strong enough to do it for long, but the nurses were so encouraging and gave me some great advice for his particular situation. They made me feel better about issues that we were having, and I feel so much more at ease about the one thing that I was most anxious about prior to giving birth.

Coming home without George was definitely painful and devastating, but it gave Tom and I time to rest and get our house fully ready for our little guy.

We feel very fortunate for the staff who took care of him for his first week. George followed their guidance and was able to get stronger with each passing day. Every time we came to visit, he passed another NICU milestone and was one step closer to coming home with us. That week in NICU felt like an eternity too, but I know we are lucky that we had a positive experience and that it wasn’t any longer than the 7 days.

Our little guy is a fighter, and now we get to have him all to ourselves. And we are so thankful for that. The security blanket of having 24 hour staff to ask for help has been lifted, and they actually trusted us to take him home.

We can totally do this right?

I won’t lie, I had my first mommy panic attack sans hospital on the car ride home from the hospital…chalk it up to sleep deprivation.

Oh and they really did put our baby in the corner. 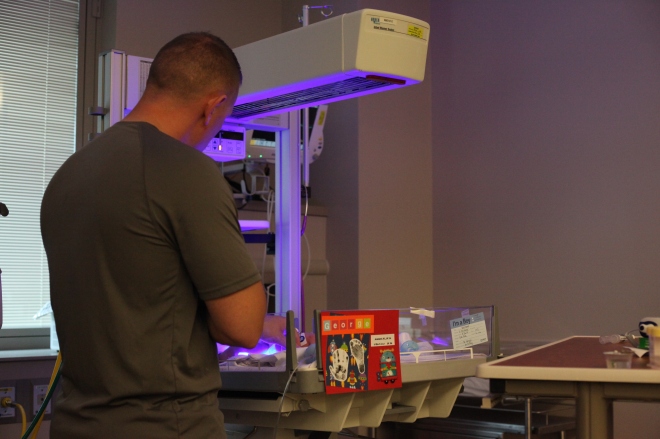 Thank you to everyone who said prayers, sent good vibes our way, or reached out with words of support. This was one of the most difficult weeks, and those thoughts in our direction were definitely appreciated.

Now I hope you are ready for George pictures in overdrive now that I have my hands on him full time. Check out #georgegram on my Instagram for the latest adorable thing.

As Tom put it about his sneezes, “It’s the most adorable thing. It’s like seeing a puppy ride a pony.”

19 thoughts on “They Put Baby in the Corner”

Happy birthday to this guy here. I get to see a side of him that no one else does, and I am forever thankful for this person by my side. He is my biggest cheerleader, and is always encouraging me to chase goals that I am afraid of. He is one of the funniest and most loyal people you will ever meet. We have celebrated 15 birthdays together, and to think of those young college kids to where we are now. Here's to year 38 babe!
December had a lot going on, but it was good to see these little people live life.