I have been asked a lot lately how I feel about living on base. I am not really sure what people are expecting when they want me to describe my home, but they always seem surprised that I love living on base. I am linking up with several other ladies to answer questions about how we chose our living situations thanks to our military moves.

It really was a no brainer for us to decide to find a place on base. With my housing background, I have had my housing provided with my job for awhile now. So the opportunity for Tom’s to continue that blessing was awesome.

If you are a single soldier, you do live in the barracks. I might add that they are nicer than some residence halls I have been in! Since we are married, Tom obviously qualifies for family housing. And the military has to provide housing in some capacity, whether that is the form of an actual place to live or giving you an allowance based on the surrounding area’s average living expenses. In order to live on base we did need to sign up for housing, and we were put on a waiting list for about a month before the duplex was offered to us.

Our situation allowed us to wait until this little number came up. I was still working at ISU, and we knew that a deployment was coming up soon, so we were not in any big hurry to move into some place we didn’t want. It made sense to wait until we found something while I still had a job in Iowa. The timing could not have been more perfect for it.

I put a lot of trust into Tom, because he toured several different homes with the housing folks by himself before he picked this one. He never sent me a picture or called before he signed away. I’d say he did pretty well! It is a two-story, two-bedroom, one and half bath option. We have a fairly decent backyard, but we also lucked out being in a cul-de-sac so we have a nice field on the side as well. We chose the carport, which has been really convenient with our projects since our other option was a small garage. This allows for some more flexibility in use-such as having BBQs while it is raining.

The way housing works on base (at least here at Fort Campbell) is that you are basically put into brackets depending on the Sponsor’s (army person) rank. Then you also look at number of rooms based on the amount of dependents that sponsor has. Since I am technically a dependent according to the Army, we are entitled two rooms-one for Tom and one for me. Once we have a kid though I no longer factor in as a “room” number. If we had two kids, we could have a 3 room house, and so on and so forth.

Because we were in a position to wait and be patient for more options, Tom was able to say no to some places that just would not have fit us. So we were pretty fortunate that the long distance worked in our favor there. Some people may not have that luxury when they need to move so they get what they get or that is when a lot of people tend to search off base. Most of our friends have chosen to live off base because there just wasn’t housing available at the time they signed up and needed something right then.

There were a few factors that really influenced our desire to live on base:

1. We had lived on a college campus for the last few years, so moving into an Army supplied duplex was going to be an upgrade. No offense to housing folks who have given us housing! My apartments were always lovely, but not having college students around at all hours is pretty nice. And parking/mail right outside my door-awesome.

2. We knew we could have a backyard and that Grace would be allowed to live with us. Going off base, you always risk the chance that the place you love won’t allow for pets, or it is an arm and a leg to be allowed to have them. We just have to register Grace with the vet on base, and we are good to go. Now we just need to work on her not being afraid to go off the porch without a leash…

3. I didn’t have a job lined up at the time we made this decision, so this was just the fiscally responsible thing to do. The rent is covered as a part of the Army providing housing, so a bill we don’t have to worry about. We do not have to pay for any of the routine maintenance or utilities. The only utility we pay for is cable and internet. We have even had a few months were we have gotten paid for how much electricity we did not use! You are given a base rate of electricity you can use based on the average, then if you go way over you have to pay, but they pay you if you go under! We have never had to pay, and we aren’t the best stewards of our electricity thanks to Tom.  If we had lived off base, we would have received BAH (basic housing allowance), but it would not have covered everything like we see here on base. The math is just obvious when you start figuring it out. So anyway, the idea of not having as many bills (even though we are debt free) was too good to pass up when we had no idea what my income situation would be.

4. We were both new to the Army life, so we thought it would be nice to be surrounded by families who are in similar situations. I often forget though that everyone around us has an Army connection because it does not look like you are on base. They do a good job making it look like any neighborhood. But the truth of it is, there is at least one person in each home who has a job with the Army.

5. Convenience. Tom’s commute is like a 2-5 minute drive. Ft. Campbell is a huge base, so it has everything you would need right here.

6. With the Army, whether you make it a career or not, the reality is you probably will not be in the same place for a long time. With PCS schedules or just living out the current contract, we could really not see ourselves delving into the search for a house with the knowledge that we would leave it in a couple years for sure. This seemed like the easiest option without having to worry about leases because our timeline at Ft. Campbell was unknown at the time.

Those were just a few of the things that drove us to choose living on base. And we wouldn’t have it any other way. We know these aren’t the nicest house around, but for the price and convenience, we really couldn’t beat it. And I feel that we have done a really nice job making it feel like a home.

And now that we live here, I love this neighborhood. I have really enjoyed getting to know it better with my half marathon training and walking Grace. I have met a lot of other people just because of Grace. She has a lab friend that we run into practically every time we go out. And to see how the families are is really just ridiculously cute. It really restores some of my faith in humanity.

I know a lot of people who choose to live off base and love it but for us the choice was obvious! We are big proponents of base housing!

Here are some more shots of our neighborhood.

This playground is on the other side of the field that runs next to our house. There are playgrounds EVERYWHERE. And they are actual playgrounds with swings! You pretty much turn every corner and a playground is within sight.

These are other duplexes next to us that have a garage instead of a carport.

These are actual houses…not too shabby. You have to have put in some years to get these though. We think that they are at least 3 bedroom, if not 4 bedroom houses with a 2 car garage.

Living on base gets a bad rap, but as you can see it isn’t any different than a neighborhood outside of the gates.

The only difference is you have to go through the gates to show ID to get home. And you see this kind of thing on a regular basis. So security is a little higher. 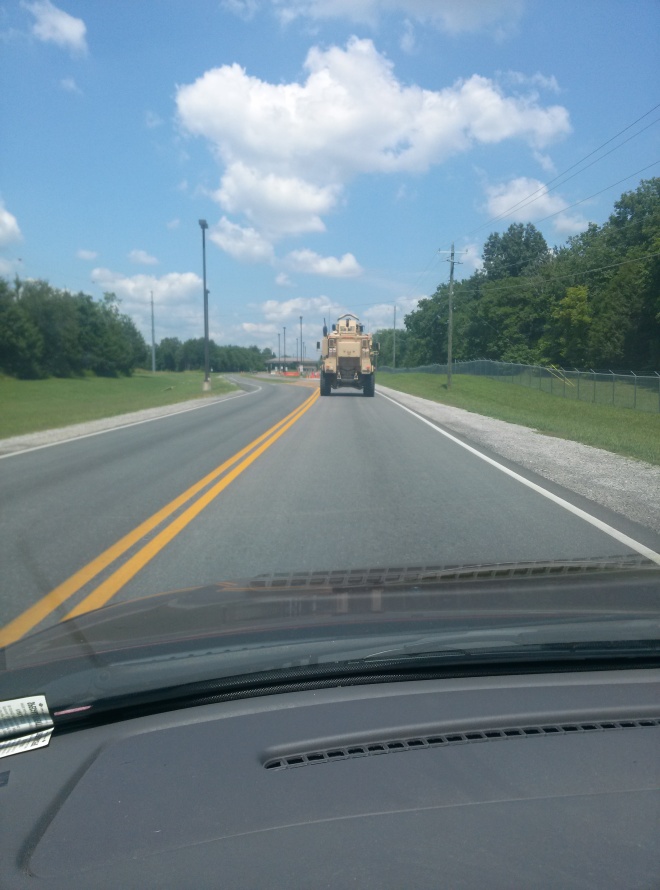 If you are moving to the Ft. Campbell area there are a few things to note. Ft. Campbell sits on the state line.

The base is nestled in the cities of Hopkinsville, KY and Clarksville, TN. I like to call it a bubble fort. I have not explored much of Hopkinsville because most of the hype goes to what is going on in Clarksville. Plus Clarksville is much larger than Hopkinsville. I also work in Clarksville at Austin Peay State University so I obviously see it more. There are several community colleges and state schools in the area if you are wishing to pursue more education. Clarksville is a growing city; the fifth largest in TN actually. Nashville is also an hour away from the area if you are looking for more opportunities of a big city.

It has been an adventure getting settled here, between trying to find a place to live (while we were long distance and deployment pending) and then figuring out a job for me. Now that things seemed to be more figured out, we really do like the area and are venturing out and exploring more that the base and surrounding communities have to offer.

Feel free to ask questions if you are curious about the area or our process!

Happy birthday to this guy here. I get to see a side of him that no one else does, and I am forever thankful for this person by my side. He is my biggest cheerleader, and is always encouraging me to chase goals that I am afraid of. He is one of the funniest and most loyal people you will ever meet. We have celebrated 15 birthdays together, and to think of those young college kids to where we are now. Here's to year 38 babe!
December had a lot going on, but it was good to see these little people live life.